A woman spends a weekend with some wealthy new acquaintances and discovers something (though not nearly enough) about herself. 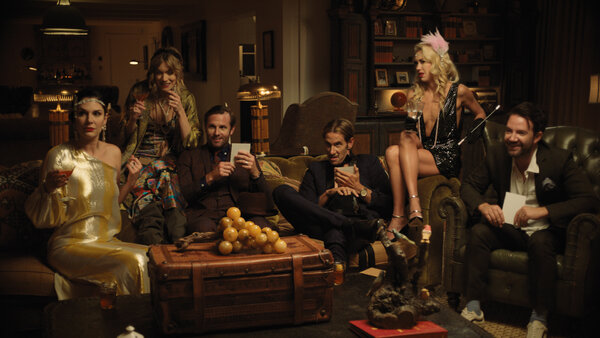 Lindsay (Britt Rentschler) is clerking at a Los Angeles consignment boutique and sipping some of the wine the store offers shoppers when the florally resplendent Cat (JJ Nolan) strolls in, catching the other woman mid-gulp. They smile and giggle and chat, making a connection that quickly intensifies when Cat starts plying Lindsay with compliments and then nearly buys out the store. Soon, a besotted Lindsay — her ego and sales commission both padded — and her poky husband, Jack (Michael Tennant) are en route for a weekend getaway at Cat’s.

Cat’s house turns out to be a sprawling estate tucked in Sonoma and, as her boutique spree suggested, she is wealthy, a touch eccentric and has found a new distraction in Lindsay. Jack has his doubts about the trip, halfheartedly joking to Lindsay “this could be some weird, rich person sex thing” or maybe something scary à la the horror flick “The Purge.” If only! Instead, the weekend turns into an overlong, undercooked comedy of manners about how, yes, indeed the rich are different; although mostly this is about how Lindsay needs to shake up her life, revitalize her dreary marriage and, you know, find herself.

It takes Lindsay almost the entirety of this sitcom-y silliness to figure it out (the viewer will get the idea in 10), which doesn’t speak well of her or the filmmakers. Written by Tennant and directed by Kestrin Pantera, “Pretty Problems” takes an indulgently long time getting to its obvious conclusion, which it does by drawing out Lindsay’s neediness and narcissism while making light teasing fun of Cat and her husband, their lifestyle and First-World problems. That Nolan gives the best performance by far here undercuts the movie’s apparent aims and its comedy — Cat may be a joke, but she’s the only one that lands.

Pretty Problems
Not rated. Running time: 1 hour 43 minutes. In theaters and available to rent or buy on Apple TV, Google Play and other streaming platforms and pay TV operators.