Kelly Oxford’s ’90s-set coming-of-age story follows a college dropout as she navigates a new romance and a new medical diagnosis. 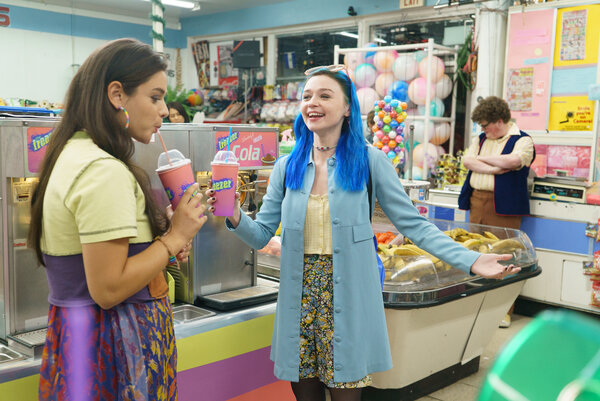 A blue-haired ball of manic energy, the 20-year-old Winona (Jessica Barden) has dropped out of school and moved back home with her parents. In a crucial time for finding autonomy, Winona is stunted. She cannot, for the life of her, pass her driving test. Even though she has outgrown her longtime pediatrician (Henry Winkler), Winona still sees him and he tells her she has an anxiety disorder — a label she immediately rejects. She carries on with her life: partying, getting high, gorging on candy and dating. She meets a strait-laced Ph.D. student and things seem to go on track. But as can be expected, her life hurtles toward a crash.

“Pink Skies Ahead” is set in 1998, when the writer/director Kelly Oxford would have been about Winona’s age. Oxford’s debut film is semi-autobiographical, adapted from an essay of hers, titled “No Real Danger,” and it mirrors the anxiety she struggled with as a young adult.

But for being such a personal film, “Pink Skies Ahead” lacks a distinctive center; it feels more like an amalgamation of different coming-of-age movies over the years, from “Ghost World” to “Lady Bird.” It is not without tender or enjoyable moments — that’s the beauty of a formula — but there’s a tonal imbalance of comedy and drama. The two constantly deflate each other.

The film takes a few distracting turns but rightfully comes back to Winona’s vulnerability. Though Barden is older than her under-drinking-age character, she effectively captures her immaturity and complexity. You may be left wishing she had more depth to work with.