As the season begins to tilt toward cold weather, it looks like you’ll be spending a bit more time at home — kidding, of course, we’ll all just continue to not go anywhere and search our streaming services, which sure seemed to have an unlimited supply of things to watch, for anything new. So, again, we’re here to help: This month’s suggestions include sex comedies, character-driven dramas, crime thrillers and even (if you can imagine such a thing) an earnest documentary.

Stream it on HBO Max.

Released on demand earlier this year, Dawn Porter’s combination bio-doc and observational portrait of the civil rights icon John Lewis lands on HBO Max, as voting rights and opportunities for representation, particularly in the South, are again a hot topic.

Porter’s film tells a quintessentially American story with structural ingenuity and stylistic flair, interweaving past and present to both summarize Lewis’s remarkable history and capture how he spent his final years, traveling the country to crusade, campaign and inspire.

The film is aware, as its subject was, that history is never in our past, and Porter wisely uses the 2018 battle for the Georgia governor’s seat as a contemporary analogue, underlining the continuing stakes of voting rights. But most of all, she captures Lewis’s warmth and personal charm; it’s a pleasure merely to spend 96 more minutes in his company.

Anyone whose nostalgia is stirred by the sound of a screeching modem and an AOL “welcome” greeting will likely grin from the beginning to the end of this turn-of-the-millennium coming-of-age dramedy from the writer and director Karen Maine. Natalia Dyer (“Stranger Things”) stars as a Catholic high school student whose trip to a peppy, abstinence-preaching church retreat rather unfortunately coincides with her sexual awakening.

Maine mines laughs from the expected incongruities and hypocrisies, but she skillfully avoids cheap shots. She doesn’t sneer at her characters, and grants humanity to even those that seem, at first glance, to be teen-movie stereotypes. And she’s blessed with the gift of Dyer’s performance, which manages to capture simultaneously the thrill and the fear of this delicate moment.

Stream it on Amazon Prime. 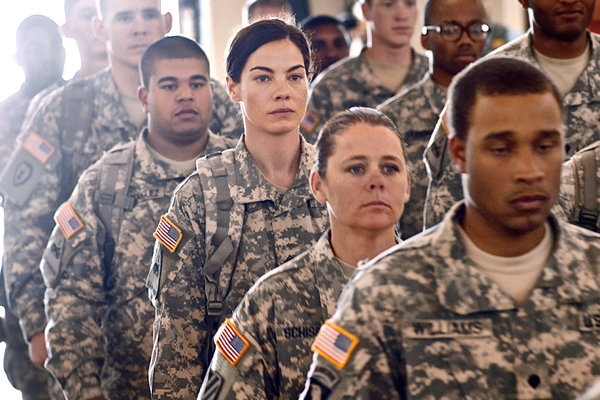 A soldier and mother returns from an extended tour in Afghanistan — and finds rebuilding her bond with her young son to be as stressful as combat — in this modest, patient and sensitive familial drama from the writer and director Claudia Myers. Michelle Monaghan (best known to mainstream audiences as Tom Cruise’s wife in the “Mission: Impossible” films) is astonishingly good as the Army medic Maggie Swann, who has been gone for so much of her son’s life that she doesn’t even know how to connect, and Myers has a keen ear for the specific ways kids can push their parents’ buttons and escalate conflicts.

It makes for difficult viewing, but Myers’s intelligent script is attuned to the difficulties of re-establishing trust and love within these precarious relationships. She feels for her protagonist without apologizing for her flaws, granting the complexity of this woman and her situation — a refreshing counter to the sinner/saint split of too many cinematic mothers. And the pointed, poignant ending will absolutely rip you to shreds.

Kids love to have sleepovers — so why can’t their parents have a little fun themselves? That’s the premise of this freewheeling, entertaining sex comedy from Patrick Brice (who also wrote and directed the markedly different “Creep” movies), in which the L.A. newbies Alex (Adam Scott) and Emily (Taylor Schilling) make friends with fellow parents Kurt (Jason Schwartzman) and Charlotte (Judith Godrèche), and find the kids’ chaperoned overnight becoming a journey of tentative sexual discovery for the grown-ups. Slight (a mere 79 minutes) but light, Brice’s film displays a winking sense of ribald humor and a sense of sexual fluidity that’s a welcome counterpoint to the casual homophobia of too many contemporary comedies.

Stream it on HBO Max.

You might think it impossible to make a movie in which magic conveys a sense of cool — but you’d think again after taking in this dramatic thriller from the writer and director J.D. Dillard (“Sweetheart”). Jacob Latimore is charismatic as a scholarship student who takes a desperate turn to drug dealing after a family tragedy, and realizes his gift for magic may be his only escape from the clutches of a kingpin (Dulé Hill, from “Psych” and “The West Wing,” playing nicely against type). Dillard proves a stylish storyteller, and his film is fast-paced and lived-in, building with force to an eminently satisfying climax.

Stream it on Amazon Prime.

Robert Duvall’s fourth film as writer and director isn’t quite as confident or successful as his earlier “The Apostle” and “Assassination Tango.” But it’s well worth seeing, a mixture of crime thriller and familial drama in which the sins of the past come around to the present, ready to collect.

Its main draw is, of course, a fully realized and beautifully textured Duvall performance, as he fleshes out the contradictions of his Texas ranch owner, who, nearing the end of his life, is trying to mend old fences. Chief among his obligations is his estranged son (James Franco), and the picture’s best scenes are their duets, as these two stubborn men attempt to work through their prickliness and age-old resentments, fumbling toward some kind of honesty and truth.

It’s easy to dismiss contemporary, gentrified Brooklyn as bland and boring, a perception that the writer and director Dustin Guy Defa does his best to deflate with this giddily dizzy comedy. Assembling an occasionally intersecting ensemble of unapologetic eccentrics and lovelorn weirdos, it’s the kind of movie in which an entire plotline can hinge on the authenticity of a rare Charlie Parker album, and the wary musings of a watchmaker can feel like a manifesto. Some of the faces in Defa’s cast are familiar — Michael Cera, Abbi Jacobson, Philip Baker Hall — while the rest (particularly Bene Coopersmith and George Sample III) should be.

Keanu Reeves stars as a family man who indulges his worst instincts — and pays the price — in this remake of the 1977 exploitation film “Death Game.” Lorenza Izzo and a pre-“Knives Out” Ana de Armas co-star as two fetching young women who appear at his door in the middle of a rainstorm, stranded and wet and asking for help while promising carnal possibilities; they deliver on that promise, and much more besides. The director Eli Roth (“Cabin Fever”) unapologetically indulges in the sleazy premise, while remembering that no great grindhouse movie takes itself too seriously, and the comeuppance of the climax unfolds with ticktock ingenuity and gleeful garishness.

Such winks are nowhere to be found in this month’s most challenging recommendation, the horrifying tale of a young woman who meets a seemingly benign suburban couple — who kidnap and terrorize her, a harrowing ordeal that seems unavoidably pointing toward her own death. The writer and director Ben Young based his film on several real-life cases in the Australia of his youth, and blurs the line between drama and true crime to great effect, using the stylistic flourishes of a horror film instead of the flat, documentary-style aesthetic of “Henry: Portrait of a Serial Killer” and its ilk. It is not, to be clear, a fun watch. But the craft on display, and the skill of the performances, make it impossible to shake.

Taylor Swift, Idris Elba and the Cast of Cats Change Their Instagram Profiles to Character Names