Growing up, I never saw my Korean-American parents touch each other. No hugs or kisses, or even pats on the back. It wasn’t the byproduct of a loveless marriage, just the consequences of a life centered on survival — that endless list of unsexy chores. I’ve lived 30 years without acknowledging such biographical details, accepting that the nuances of my life could never make it into mainstream culture.

This year, watching “Minari” challenged that assumption. For the first time, I saw my parents and all their platonic mannerisms projected in 4K clarity. I felt seen. But watching, and relating to, this tender film about a Korean-American family vying for a better life in rural Arkansas, I also felt grief.

That’s because “Minari” was not a film about an emotionally supportive family, nor was it about East Asian parents thoughtfully passing on their traditions, or about a wife having as much influence in family decisions as her husband. Just as in my own life, I thought.

Noticing these omissions has reminded me of what realities immigrants accept in pursuit of the American dream, and the full, uncomfortable picture of the immigrant experience we rarely see portrayed onscreen.

Because “Minari” doesn’t lean on stereotypical ideas of immigrants, some of these nuances might have been harder to notice. As in reality, hope and suffering occupy the same scenes.

The lost piece of the emotionally supportive family felt especially poignant to me because that has defined my own relationships.

In “Minari,” the family is headed by Jacob and Monica Yi, Korean-American immigrant parents who work tedious jobs as chicken sexers, sorting female chicks from male ones. The couple, with their grade-school-age children, Anne and David, have just moved onto a plot of land in rural Arkansas. Jacob hopes to turn the site into his own farm and grow Korean produce to sell to local vendors. 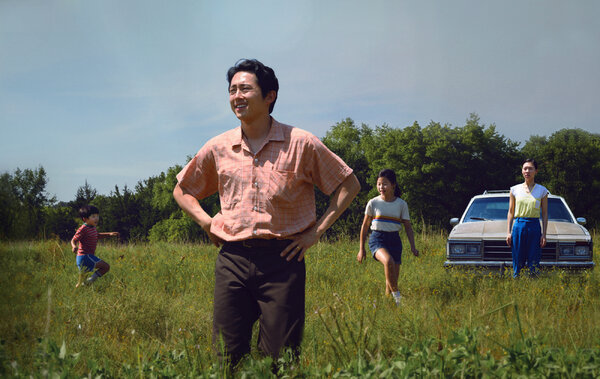 Starting a farm on limited funds — while working full-time jobs — isn’t easy, and Jacob quickly gets wrapped up in tending to his crops. We hardly see him as a caressing father or supportive husband. The few moments he is shown spending time with his son happen while he toils on the farm.

In one scene toward the end, Jacob’s absence from his family shows up in a more acute way.

Jacob and Monica drive David for a checkup for his heart condition. Hoping to sign up a new vendor on that same road trip, Jacob lugs a box of fresh produce along. When the family arrives at the doctor’s, Jacob hesitates to leave his produce in the car and sends the family ahead while he searches for a shaded spot. Unsuccessful, he shows up many moments later with the produce box in his hands, having prioritized its safety over his timely attendance at David’s appointment.

The situation feels fairly innocent. Jacob saves his produce from the sweltering heat and makes it to the appointment, albeit late. But it’s one in a string of scenes that make clear where his priorities lie.

As someone who grew up with a workaholic father myself, I know how this relationship plays out between the scenes: Strained attempts at bonding with an emotionally distant parent, the regular need to temper his anger and, eventually, a feeling that you must do something truly exceptional to earn his attention. But Steven Yeun’s portrayal of Jacob is also precise because, as with my father, I know that any faults of his are a result of his complete — though sometimes misplaced — commitment to the family’s financial stability.

“Minari” also reminds us of how much heritage is never mentioned and ultimately lost in the busy labor of assimilation. While most of the dialogue in “Minari” is in Korean, we never get a glimpse of Monica and Jacob passing on their traditions to Anne and David in any meaningful way. What Korean legacies the children inherit come in the way of food, which David is sometimes repulsed by.

I felt sad watching David dismiss his grandma, saying she “smells like Korea,” and pushing away her medicinal hanyak (that deep brown liquid we see him drinking from a bowl). I’ve never had a close relationship with my grandmother, nor have I ever been given the chance to connect with my culture in a way that would make me feel at home if I were to live in Korea. Watching “Minari” made me feel as if I were watching the origin story of my Korean-American identity crisis.

To understand the Yi family, you also have to acknowledge the outdated gender roles that families fall back on when starting anew.

Despite her strong opinions and clear sense of self, Monica ultimately has little agency as a wife and mother. It’s not Monica making the decision about where to live, what to do with their land, or how to spend their money. It’s Jacob. And watching his tightfisted determination to enforce his decisions, we understand that Monica’s opinion holds little sway. As a Korean-American, I wasn’t shocked by this power imbalance — South Korea operates as a deeply patriarchal society, and when many immigrant families move abroad, they import the sexist notions that structured their lives back home. (It’s true almost anywhere that in times of crisis — like the current pandemic — women often pick up more of the housework.)

Of course, whether it’s a helpless mother or an unclear understanding of where they’re from, Anne and David are aware there are missing pieces in their lives. Or at least they will be at some point as they become adults.

As many immigrants know, these struggles are inherited by the children of immigrants, their learned trauma revealing itself in less poetic ways: in a persistent belief in conditional love, in a fragmented sense of identity (neither Asian enough, nor American enough), and an awkward and outdated understanding of gender roles.

“Minari” is a powerful film because it dares to lay bare these painful opposites that contribute to our happiness.

“Immigration stories are family stories,” the film’s director, Lee Isaac Chung, said in an interview with NPR. “What often gets overlooked in that story is the fact that a lot of that is happening due to the feeling of love, that feeling of a desire to sacrifice for each other.”

In “Minari,” those daily sacrifices are depicted by what’s not shown, by what the family learns to do without. And ultimately, in allowing a Korean-American family to not actually be defined by this suffering, the film somehow arrives at an incredibly honest portrayal of life as a newcomer.