Spacey’s attorney argues that the case has been “completely compromised” 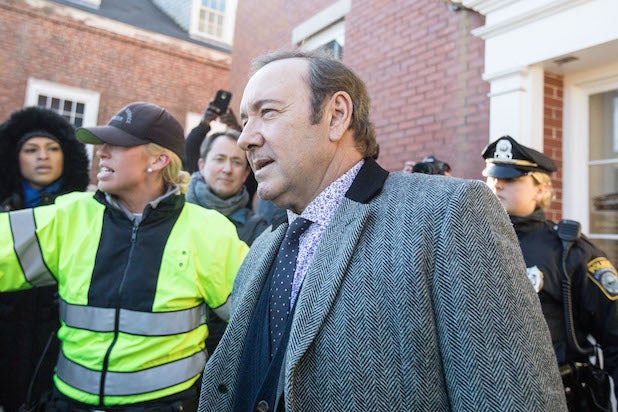 The sexual assault case against Kevin Spacey may not proceed to trial after the man who accused the actor of groping him three years ago refused to testify during a pre-trial hearing.

On Monday, the unnamed accuser was questioned by Spacey’s attorney, Alan Jackson, about the alleged 2016 incident at a Nantucket bar where the then 18-year-old accuser claims to have been groped by Spacey. According to local ABC affiliate WCVB, Jackson asked the accuser about the location of a phone he used to send text messages about the incident, some of which Spacey’s attorneys say have been deleted and show that the accuser “exaggerated” his telling of the bar encounter.

The accuser denied deleting any text messages from his phone, which has gone missing since screenshots of the text messages were sent to police. The accuser’s father, Nick Little, denied that he or his wife, former WCVB news anchor Heather Unruh, told their son to delete any messages.

“On one of the screenshots, one half of the conversation is missing, but I did not delete anything,” the accuser testified. “I gave what I had available at the time. I did not manipulate any of that.”

After a court recess, the accuser’s attorney, Mitchell Garabedian, said that his client wished to invoke his Fifth Amendment rights against self-incrimination and to have the previous testimony stricken from the court record. Jackson then moved for the case to be dismissed.

“This entire case is completely compromised,” Jackson said. “[The accuser] is the sole witness who can establish the circumstances of this allegation on the night in question.”

Judge Thomas Barrett denied the motion to immediately dismiss, but acknowledged that “I don’t know what’s going to happen with [the accuser], whether the case is going to continue or collapse.”

The new testimony comes three days after a civil case against Spaceyby the accuser’s family “because of the emotional roller coaster my client is on,” according to their attorney.

The Nantucket accuser is one of more than a dozen people who have accused Spacey of sexual harassment or assault since Broadway star Anthony Rapp accused the actor of sexually assaulting him as a 14-year-old. The accusations cost Spacey his lead role in the final season of Netflix’s “House of Cards” and led director Ridley Scott to reshoot his film “All The Money In The World” to replace Spacey’s completed performance as J. Paul Getty with Christopher Plummer.

Outside the Massachusetts case, Spacey is being investigated by Scotland Yard over six claims of sexual harassment and assault that allegedly occurred in London while the actor was artistic director of the Old Vic Theatre from 2004 to 2015. Variety reported this past weekend that Spaceyin connection to that investigation in May.

Attorneys for Spacey and his accuser did not immediately respond to TheWrap’s requests for comment.