When I was small my roaming range was limited to home and primary school, but gradually I was given more freedom. At 11 I would get on my BMX and ride down to the milk-bar for a Cadbury’s Snack (my favourite flavour was pineapple; I tolerated coconut ice).

On my bike I was intrepid, riding as far as the creek, or to friends’ houses, or to the spreading almost-built estates. When I rode my bike I sang. I like to picture myself at that age: singing and standing on my pedals, like nothing was better than being alive, in possession of chocolate and zooming through a landscape.

At 13 my range widened again. Now I was allowed to catch public transport, mostly with my sisters, but sometimes alone. The fun wore off fairly quickly. I was a lazy girl who liked a lift. We lived in the sticks and it seemed like I spent many useless hours on public transport – I hadn’t yet learnt to kill time by reading.

If looking at the other passengers disturbed (why did grown-ups always look so worn out?) looking out the window wasn’t much better. The scenery never changed, and I felt similarly static.

In year 9, I changed schools – now my commute encompassed walking, buses, trains and trams. This ‘‘widening’’ was external but it was internal as well. I didn’t consciously sit myself down and ask, ‘‘Hey, who do you want to be now?’’ but unconsciously the question churned.

My new friends were fierce. Things were permitted in their houses that I could only dream of in mine. They lived close enough to each other that they could travel in a pack and being a pack animal had its benefits. You could swear loudly in front of old people if you had back-up. You could collectively stare a teenage boy off a tram two stops too early. 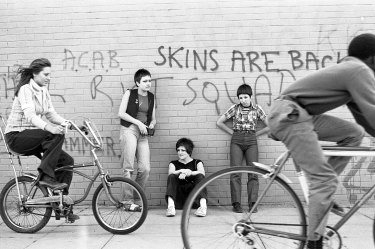 A group of teenagers hanging out in the 1970s.Credit:Alamy

We were inclined to hang out after school at what was then known as Doncaster Shoppingtown (now Westfield), or Shoppo, or ‘‘Shoppingtown, maaate’’ with exaggerated ethnic inflection. I hung out there even though it extended my travel by an hour and a half, and meant walking home from the bus stop in the dark, past the creek, heart pounding, late for dinner.

Until Shoppo, the places of my teenage life rarely escaped the adult gaze. At home and school my roles were fixed but at the shopping centre with my new friends, and the boys we met, I was – at least in my head – mysterious and unproven.

Artist and conservationist Alan Gussow defines place as ‘‘a piece of environment that has been claimed by feelings … the catalyst that converts any physical location into a place is the process of experiencing deeply’’.

When Doncaster Shoppingtown was opened in 1969, I wonder if the planners anticipated what it might mean to teenagers, that they (we) would repurpose it as a place to ‘‘be’’ where there was a sense of security, but also freedom, where the effect of being unwanted by the purposeful adult consumers was, perversely, to feel like you belonged.

This phenomenon of hanging out in shopping centres was captured in movies that meant something to me. Amy Heckerling’s Fast Times at Ridgemont High (1982) opens and closes at the mall. The school year rolls out: Stacy loses her virginity, Damone betrays his best friend, Brad gets sacked from All American burger and is forced to don the Captain Hook Fish & Chips pirate uniform. Through it all the mall is there to house and to witness.

In Joyce Chopra’s Smooth Talk (1985), based on Joyce Carol Oates’ short story Where are you going, where have you been, Connie and her friends use the mall as a testing ground where they can experiment with their emergent social/sexual power.

They flirt and terrorise. They indulge in mini-fantasies, trying on the clothes to match the lives they aspire to. The mall is the borderland between innocence and experience. Ultimately, it is the real world that they have to worry about.

I remember clearly the names and faces of the boys of Shoppingtown. I remember cadging cigarettes and hot chips, but I can’t remember conversations. I am sure there were connections, but they were nuanced and fleeting. They never built to anything.

We used to hang out where the buses came and went, a concrete shell of noise and heat and belching smoke. We leaned on rails, and draped ourselves on inhospitable benches. We rarely went into the shops, but all the consumables and the lights and the colour and music made for an alive, potent environment.

All day at school I would look forward to Shoppingtown and what happened there would carry me all the way home. The next day it would happen all over again and there was comfort in this repetition.

Scholar Noora Pyyry writes: ‘‘Hanging out is a deviant act in today’s society because it lacks clear goals.’’ In her research about teenage girls ‘‘dwelling with’’ public spaces, she asserts that this aimlessness results in ‘‘a playful immersion with the commercial landscape … Whilst hanging out the girls temporarily rework the atmosphere at the shopping mall in lived experience that exceeds the relations of consumption.’’

What I do remember: Feelings. Buzz and hilarity. Heightened senses. Performance. Enchantment. My Shoppingtown season lasted two terms at the most, and then: dispersion. We moved on to parks and house parties and all-ages clubs. Soon we were old enough to pass at the ‘‘adult’’ places, pubs and clubs, and eventually we were out of school, and into share-houses and the problem of place was no longer a problem.

If the goal of adolescence is to learn what’s required to participate in a society, I wonder how hanging out helps. I think of those purposeless hours as important to my self-development, but find it hard to articulate how. (And I wonder if that’s the enchantment – that it only makes sense while it’s happening.)

These days shopping centres represent something different to me. I avoid them. If I must go to one, my objective is to get in and out as quickly as possible. I don’t stop and look around, but maybe I should. I could stop for a shake and donut hole, have a moment with my teenage self – because she still travels with me, and she’ll be expecting me to pay.

Diane Keaton never got married. This is the reason why