[Warning: spoilers for It Chapter Two, ahead]

It Chapter Two really did the most, didn’t it? Jessica Chastain’s job wasn’t just to help the rest of the very famous members of the adult Losers Club finally kill evil Bill Skarsgård, she had to bathe in gallons of fake blood to do it. Bill Hader embraced the gay. Shadowhunters’ Isaiah Mustafa shed his werewolf lineage to go full hermit. James McAvoy…didn’t have to do anything he hasn’t done before, but he was great as always.

Nevertheless, I have some questions…

What happened to the gay bashers?!

Honestly, the scariest moment of the It sequel had nothing to do with Pennywise. The film opens in Derry, Maine, 27 years after the events of the first. A young, happy gay couple (Xavier Dolan and Taylor Frey) are enjoying a night at the town carnival when they’re confronted by a group of homophobic dirtbags. Later, as they’re walking home, the same group attack them, beating Adrian (Dolan) right in front of Don (Taylor) before throwing him over the side of the bridge. It’s the type of stomach-churning brutality that can only come from actual humans.

Of course, Pennywise comes in when Don attempts to save his boyfriend, only to watch Adrian’s heart get ripped out by the clown. Then…that’s it? It signals to the only Loser left in town that he needs to get the gang back together. But did the Derry police department ever catch the group of gay bashers?! Why couldn’t Pennywise have killed them?

How do the Losers Club forget everything?

Six out of the seven Losers leave Derry, Maine as soon as they could to become famous writers, comedians, architects, etc (seriously, they’re all v successful, which is kind of weird). It’s not until Mike (Isaiah) calls them back home that they begin to remember what their lives were like growing up, and the Pennywise of it all. But…how?

It’s explained that there’s a magic in Derry that makes you forget it once you’ve left, but where does this magic coming from. Is it from Pennywise himself? If so, how does that work if he was so weakened by the kids at the end fo part one?

Once Mike convinces the rest of the group that Pennywise was real—and that It’s back—he brings them to his home where he explains his plan to kill the thing. They each have to find a token of their childhood trauma, go to It’s lair, and perform the Ritual of Chüd! Duh! 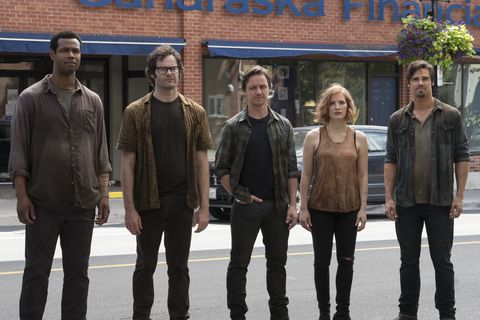 He shows them the ritual on what looks like a very old lampshade he got from a local Native American tribe, with one side completely scratched out. Turns out that side depicted the death of the ritual performers. Mike was obvi afraid to tell his friends, but like…why didn’t any of the Losers ask what happened to the first group to try to take out Pennywise? Or why an entire side of the lampshade was missing?!

Why are people saying Bill Hader deserves an Oscar?

How #ITChapterTwo Should Have Ended:

Don’t contest this. You know it’s true. Also, give the Oscar to Bill Hader. pic.twitter.com/5TyOtjDjjm

People keep saying that Bill Hader deserves an Oscar for #ITChapterTwo. I say that when he gets the nomination, they should give it to @FinnSkata too, because the Street Fighter scene is pivotal and at the heart of what made Bill’s performance, and Richie’s character, so amazing pic.twitter.com/Y7NJ6PYZGG

Me on my way to Bill Hader’s house with his Oscar #ITChapterTwo pic.twitter.com/wGSL6UPdvD

These are just four of around 100 similar tweets.

Don’t get me wrong, Bill Hader’s performance was hilarious, but also nuanced and heartbreaking at times. But Oscar-worthy? Relax.

How come only the non-famous Losers died?

When you’ve got a group of seven protagonists and a scary monster, it would be kind of a copout if nobody bit the dust. Still, how wild and unexpected would it have been to kill off Jessica Chastain’s Beverly or James McAvoy’s Bill as opposed to Andy Bean’s Eddie and James Ransone’s Stanley?

You know how I know you don’t know who those people are? You didn’t even notice that Andy actually played Stanley, while James played Eddie. 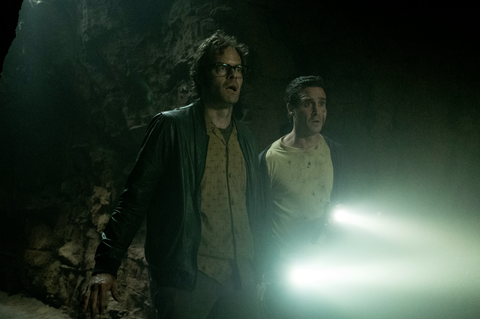