No pun intended, but imagine a world in which no one has ever heard of the Beatles or any of their songs. That’s the clever premise behind Yesterday (out June 28th), the new film directed by Danny Boyle (Trainspotting, Slumdog Millionaire) and co-written by Richard Curtis (Four Weddings and a Funeral, Love Actually, Notting Hill, and Bridget Jones’s Diary). In Yesterday, Jack, a struggling guitarist and singer-songwriter played by Himesh Patel, is struck by a bus during a freak, momentary global blackout. When he awakens, he realizes that the power failure has erased everyone’s memory of the Fab Four, allowing him to appropriate their songs and transform himself into a chart-topping pop star by way of someone else’s tunes.

Along the way, Jack meets and performs with Ed Sheeran, who plays himself in the film (engaging in some commendable self-mockery). Jack also falls in love with the childhood friend who is now his manager, Ellie (Lily James of Downton Abbey and Mamma Mia: Here We Go Again). Curtis admits that bobbing back and forth between Jack’s career and love life was “a juggling act,” but feels both themes work together. “One is the idea that we’re all imposters,” he says. “But I also wanted to write a love story. No matter what becomes of you, love is the most important thing in the end.”

The idea for the film originated with writer Jack Barth, but when Curtis heard about it, he threw his hat in the ring to do a version. “I said I loved the idea, and could I get permission to write my own script of it?” Curtis recalls. “The Beatles have been the most important thing in my life and I’ve always strived to make films that are somewhat about the joy they gave us. So as I cruise toward the end of my career, I wanted to do something directly related to them.” Curtis’ fresh take is what ended up onscreen, with Barth receiving a story-by credit.

Boyle and Curtis had worked together on the opening ceremony of the Olympics (Curtis wrote the segment that revolved around the eccentric character “Mr. Bean”). And after Boyle casually asked Curtis if he was working on anything else, the Yesterday script (then called All You Need) arrived. “To be honest, I thought, as you do with a good idea, this must have been done before,” says Boyle. When he realized it hadn’t, he signed on. “I thought it was a wonderful way to make a film about music,” Boyle says. “It’s not like a musical. You’re not just covering the Beatles’ songs but recovering them from the dustbin of memory and re-presenting them to the world.”

Here, the pair answer six burning questions about how Yesterday came to life.

How were they able to use so many Beatles songs in one movie?
All you need is cash. Curtis was told early on that including Beatles material in a movie would be feasible, since the recordings would be covers and not the more expensive and harder-to-license original recordings. “I’m not sure I would have written a whole film if I hadn’t been reassured that we had permission,” says Curtis, whose script called on Jack to sing 15 Beatles tunes, from “I Want to Hold Your Hand” to “Let It Be.”

Although he wasn’t legally obligated to do so, Curtis didn’t want to ruffle any Beatle feathers and sent the script to Sony/ATV, which controls the Beatles’ publishing. “Every other script you get is a biopic or a documentary,” says Sony/ATV Music Publishing president and CFO Brian Monaco, who oversees licensing of Beatles songs for films, television and other projects. “So when you get something like this that’s so left-of-center, it gets people’s attention.”

Both Monaco and Apple Corps, the Beatles’ company, liked the concept and script. “They would not have released permission to do 15 songs if they thought it was a bad idea,” says Curtis, “and if they thought it would be a disgrace to the Beatles.” In an arrangement that Monaco admits was highly unusual, a deal was cut that allowed the filmmakers to use any 15 songs of their choosing from the Beatles catalog (for an undisclosed fee). “There was a stipulation about how many times each one was used,” says Boyle, “but they built the deal with the freedom that we could change songs if we wanted.” 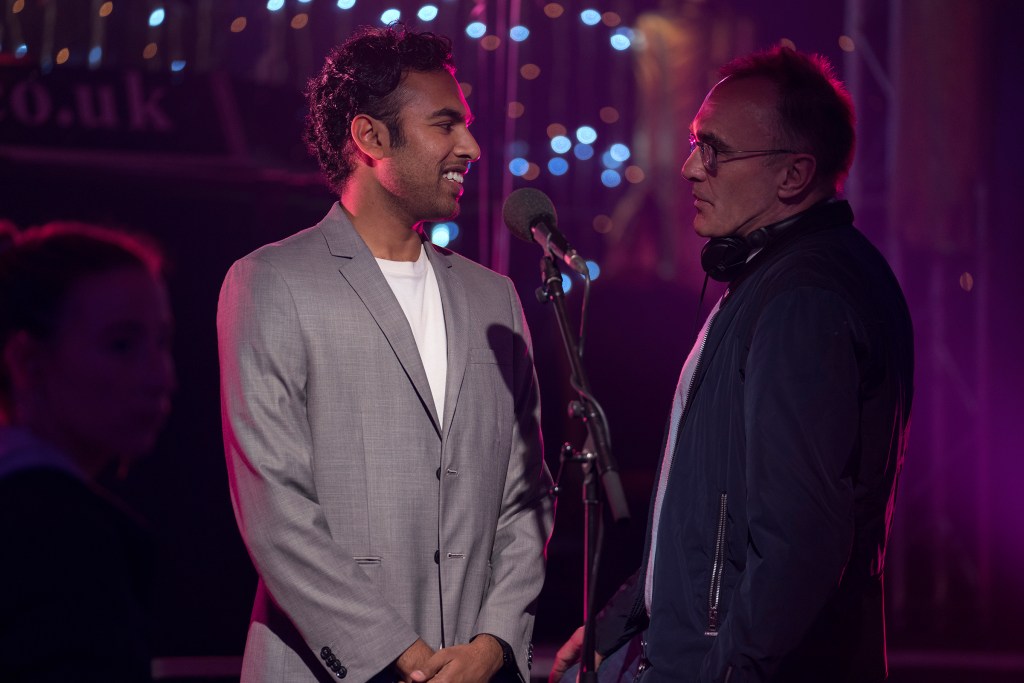 Patel and Boyle on the set of ‘Yesterday.’ Photo credit: Jonathan Prime/Universal Pictures

Why did they only choose the biggest hits, like “Help!” and “Yesterday” but not “Sexy Sadie” or “Rain”?
Simply to ram home the premise of the movie. “It’s such a huge catalog, and the joke of the film is that the songs are so famous and no one knows them,” says Curtis. “I adore ‘This Boy’ and the lesser ones, but the whole point is that he plays ‘Yesterday’ or ‘The Long and Winding Road’ and no one knows it. We were always going to go for the top 25 in the catalog, the songs on the blue and red [compilation] albums.” Adds Boyle, “I’d love to have included ‘I’ve Just Seen a Face,’ but not enough people know it.”

Did the Beatles have to sign off on the script?
No, but since the film ends with an actual recording of one of their songs, they did have to approve its usage in the scene. Luckily, representatives for Paul McCartney, Ringo Starr and the John Lennon and George Harrison estates were fine with it. McCartney wasn’t able to make an early screening of the film, but Starr sent a positive note to all involved after he’d seen it.

Boyle is a punk obsessive who’s currently producing a feature biopic about Creation Records (home of Oasis and other Eighties and Nineties Brit bands). What are his Beatle-fan bona fides?
Growing up in England, Boyle was introduced to the band’s music by way of his parents. “I’m a twin, and my sister and I would hear the Beatles playing downstairs,” says Boyle. “My sister was in love with Paul and I would pretend to be John. We’d sing together upstairs and play little games to the films. I still have those 7-inch [singles].”

Led Zeppelin and David Bowie albums were part of his record collection first, but eventually the young Boyle bought Abbey Road, and the medley on side two still blows his mind. “They put those songs together side by side, and in a symphonic way, and there’s such a variation between playful and soulful,” he says. “They were doing all that before what we’ve done since with remixes and mixes. It’s astonishing.”

Why is Ed Sheeran in this movie?
As with so many things, it’s Chris Martin’s fault. One of the organizers of the philanthropic effort Red Nose Day in the U.K., Curtis noted Martin’s screen presence and deadpan sense of humor when Coldplay filmed a mock Game of Thrones musical for the event in 2015. He initially asked the singer to play the role of Jack, but Martin begged off, insisting he wasn’t an actor.

Curtis then went to his number two choice, Sheeran; the two live within 10 miles of each other outside London, and Sheeran would “come over for a quick drink or to watch a football game,” says Curtis. The choice also made sense since Curtis had written the script partly with Sheeran in mind: After a few years of pop-star traveling and carousing, Sheeran wound up marrying his childhood sweetheart last December, which ties in with one of the plots in Yesterday. “Ed’s made so many great choices, like keeping things simple and going on holidays with his friends,” Curtis says. “Even though my first choice was Chris Martin, Ed is the inspiration for the film.”

Throwing himself into his first major screen role, Sheeran (who had a cameo in Season Seven of Game of Thrones) attended rehearsals and wrote a new closing song for the film. He also allowed the filmmakers to shoot one of his stadium shows in a scene involving Jack. While Sheeran has said that Harry Styles was offered the role after Martin, Curtis denies it: “Ed was number two, and there’s nothing wrong with being number two.” 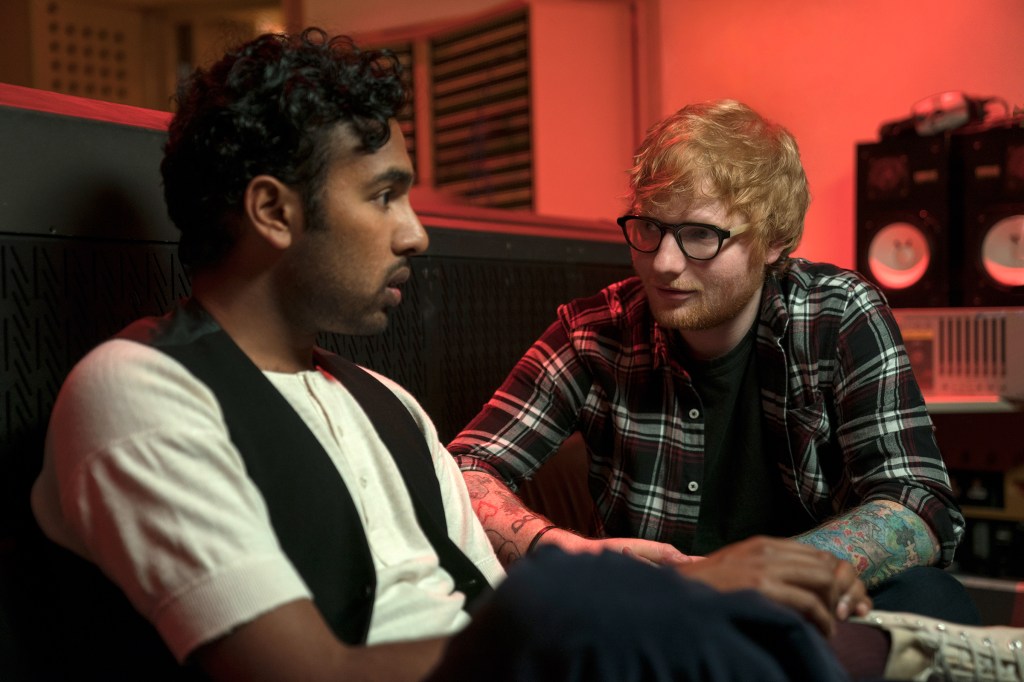 Patel and Sheeran in a scene from ‘Yesterday.’ Photo credit: Jonathan Prime/Universal Pictures

How does Yesterday aim to affect the Beatles’ legacy?
The Beatles are hardly fading — billions of their songs were streamed last year — but alerting millennials to their existence was in the minds of all involved, especially Sony/ATV, which actively looks for ways to refresh its catalog. “When we read the script, we weren’t sure at first that it would work,” admits Monaco. “But then we realized it could benefit the Beatles’ catalog and introduce them to a new generation. I’m not always sure the younger generation now is aware of the Beatles, but Ed’s fan base will see it, and some of them may not be aware of the Beatles. So we expect to see spikes in [Beatles] streaming.” Not only that, plans to turn Yesterday into a Broadway musical are already underway.

Adds Boyle, “We’ve done some test screenings, and you meet people who say they don’t know the songs. But on some level, I think they do. One of my theories about this stuff is that it’s passed down whether you’re aware of it or not. Most of these songs are already in people in some way.”

As to whether that trend will continue in decades to come, Curtis believes it will: “Things move at such speed now. But I do think they are going to last in really interesting and complicated ways. The variety of their songs is extraordinary. While Himesh is not as good a singer as Paul or John, these are still amazing songs. My instinct when we were making the film is that they would be a hit now. ”

Wonder Woman Cutting Off Heads? It Almost Happened in the First Film