The Wave House, a UK influencer collab house that dubbed itself the “most extravagant creator mansion,” was a viral sensation when it debuted on TikTok last fall.

The house arrived on TikTok with a bang. Its first member-reveal video surpassed 50 million views, and within two weeks, the house account amassed 2 million followers.

The group of creators continued to post exuberant content. For instance, when a viewer said “get kart track and dress up like Mario kart characters,” they did — and got over 3 million views. Wave House’s TikTok page was a wild success.

But instead of continuing to post videos, the account went silent for two months after it “eliminated” members one by one in December.

Now the Wave House is up to something new. The house launched “season two” in March, which will run for three months.

Wave House is one of a few TikTok collab houses to choose a seasonal development model as it seeks to build sustainable businesses. Creating content in seasons, instead of 365 days a year, offers houses (and their stars) time to reset, plan, and cut costs. In the off time, there’s no rent to pay for the mansions these creators move into.

HoneyHouse, a group of millennial creators, is prepping for its third season. It launched last summer in Los Angeles and has since moved locations and introduced a new cohort of members. Other houses have also adopted a rotating-member model, switching out TikTok talent as they come and go.

“If we were just here for an entire year, and it was like three videos a week, every week, for a year, you’d run out of stuff to do,” Zack Fairhurst, a Wave House member, said.

Seasonal houses like Wave House have taken a page out of reality TV’s playbook. They make the “house” a production, rather than a place TikTok stars live together indefinitely.

The break between seasons can also leave the audience on a cliff-hanger and wanting more, Fairhurst said.

“It’s like your favorite TV shows,” Eloise Fouladgar, a Wave House cofounder and member, said. “When the season ends, you’re like, ‘Well, I can’t wait for the season to come out.'”

While Fouladgar and Hall found new members, the Yoke Network, the influencer-marketing agency that helped found and launch the house, was busy plotting the house’s return.

To help produce the second season, Wave House and Yoke Network partnered with Brave Bison, a social-content studio and media network. In addition to its TikTok content, the house upped its YouTube presence, introducing a weekly series of “reality-show” episodes. The house also launched a Snapchat series and has a documentary in the works.

In a March press release announcing the launch of season two, Jidé Maduako, Yoke Network’s CEO and cofounder, described the house’s reality show as a rival to “Love Island,” but for TikTok fans. 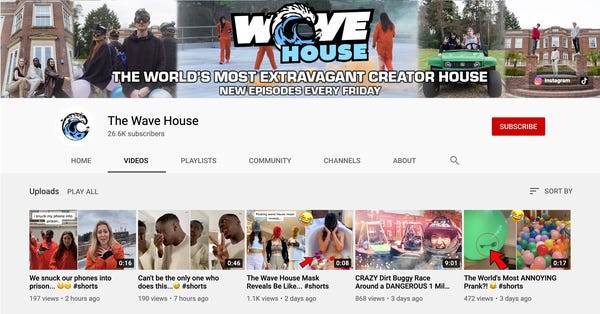 A ‘massive’ difference between seasons

Relaunching Wave House was more than just new members and a new mansion. The months between seasons one and two provided the founders time to critically evaluate what went right, what went wrong, and where they could improve.

“The difference between this and season one is massive,” Fouladgar said.

“I think last time it was a lot more of a spectacle,” Maduako said. “But season two is about who the creators really are, kind of getting to know them.”

While the spectacle of the first season worked — Wave House now has 4 million followers on TikTok, 60 million likes, and nearly every video breaks 1 million views — it came at a hefty cost.

The house spent thousands of dollars on the flashy stunts for season one. A bright-red helicopter landed in the front yard of its estate for one of the unmasking videos. That helicopter cost the house about $7,000, Mustafa Mohamed, Yoke’s cofounder and chief technology officer, told Insider last year. Wave House even built a roller coaster in its yard for one video, and another TikTok video featured a Batmobile.

But season one “taught us a lot,” Fouladgar said.

“You don’t need money and a big budget to be making successful, good TikToks,” she added.

The house has a pretty flexible budget for the second season, but instead of investing money in extravagant props, Yoke Network is spending on content that aims to develop a stronger relationship with the audience Wave House has already built and that is a bit more relatable (while still luxurious, to fit the house’s brand).

“That’s something that’s a lot more sustainable in my opinion,” Maduako said.

Still, operating a content house, regardless of the added production costs like Wave House’s stunts, is an expensive investment. The up-front investment for the house cost Yoke Network about $200,000 for each season, Maduako said. Yoke Network completely funds the house, paying rent for the properties and getting the group brand deals.

During Wave House’s first season, the group worked with two fashion brands on sponsored content: PrettyLittleThing and Zalando. Like many other content houses, brand deals and sponsorships play an important role in funding Wave House.

Participating in these house deals is part of the terms of being a creator at Wave House. Yoke Network gets 80% of the revenue from house brand deals and the creators get 20%, Maduako said. For personal brand deals, Yoke Network takes a 20% cut and creators get 80%, which is typical for management firms. This all helps Yoke Network foot the bill for the production costs.

Last season, the house “pretty much” broke even, and its sponsorships helped pay off Yoke Network’s investment, Maduako said. But now Yoke is considering how to make Wave House profitable and a project with longevity.

“For it to be sustainable, it has to be financially viable,” Maduako said.

Building a collab house into a business

But building a business beyond sponsorships is part of the plan for Yoke Network and Wave House.

Here are a few other ways that Wave House is funding the house and trying to make a profit:

And for the creators themselves, living in the house brings its own business opportunities.

“I think being in the Wave House before, in season one, I made the most money I’ve made on social media,” Fouladgar said. “And then when I came out of the Wave House, it really slowed down the brands, and now I’m back in, and it’s picked up again.”