Early in “Hillbilly Elegy,” Ron Howard’s adaptation of J.D. Vance’s best-selling memoir, J.D. (Gabriel Basso), a Yale law student, attends a fancy dinner with representatives from top firms who are scouting young legal talent. Bewildered at the silverware arrayed around his plate — so many forks! — he calls his girlfriend, Usha (Freida Pinto), a fellow Yalie, who gives him a quick tutorial in the theory and practice of formal table-setting.

An oddly shaped knife, she explains, is used for fish. The scene is meant to emphasize that J.D., a former U.S. Marine with an undergraduate degree from Ohio State and a family rooted in rural Appalachia, is a fish out of water in the Ivy League. The awkward silence when he mentions his background, the casual snobbery about “state schools” and “rednecks,” the smugness that hangs like a fine mist in the New Haven air — all of that brings home a solid, blunt point about the class condescension baked into so many American elite institutions.

Including Hollywood, for all its small-d democratic fantasies. Later, J.D.’s sister, Lindsay (Haley Bennett), will bring him a fried bologna sandwich and wash a sinkful of plastic forks, but this version of “Hillbilly Elegy” (available on Netflix in time for Thanksgiving) has more in common with that Yale soiree than with Lindsay’s backyard cookout.

The intentions are admirable: the filmmakers want to make room for J.D. at the table (Vance is credited as an executive producer) and to give his family story a fair hearing. But it can be hard to figure out what story the filmmakers think they should be telling. Howard and his producing partner, Brian Grazer, along with the screenwriter Vanessa Taylor, have laid the table with heavy silver — a blue-chip cast, a plush orchestral score (by David Fleming and Hans Zimmer), a high-gloss look that gestures toward realism without quite delivering it — and proceeded to mix up the forks.

The narrative zigzags through time and space, starting out in Kentucky, where J.D. spends summers as a boy (played by Owen Asztalos) among his extended family. The older J.D. is called back home to Middletown, Ohio, when his mother, Bev (Amy Adams), overdoses on heroin. Her addiction and general instability while J.D. is growing up, balanced by the benevolent influence of Bev’s mother, Bonnie, universally known as Mamaw (Glenn Close), provide a dramatic structure, or at least an explanation for the regular explosions of drama.

At one point Bev, behind the wheel and suddenly enraged at J.D., floors the accelerator and threatens to crash the car. Adams plays every scene with the pedal to the metal, clocking zero to howling frenzy in 10 or 15 seconds. Close, for her part, lets out a steady barrage of grandmotherly wisdom, obscenity, threats (“I’ll cancel your birth certificate!”) and football-coach-style encouragement. Partnered with Madea in a Tyler Perry movie, Mamaw would be a pop-culture force to be reckoned with. Like Madea, she is an exuberantly profane, slyly self-aware character, but the movie traps Mamaw, and Close, in a sticky web of piety and sincerity. Her individuality is circumscribed by the need to treat her as a symbol — a figure at once cautionary and inspiring, an example of a sociological rule and also the prime exception to it. 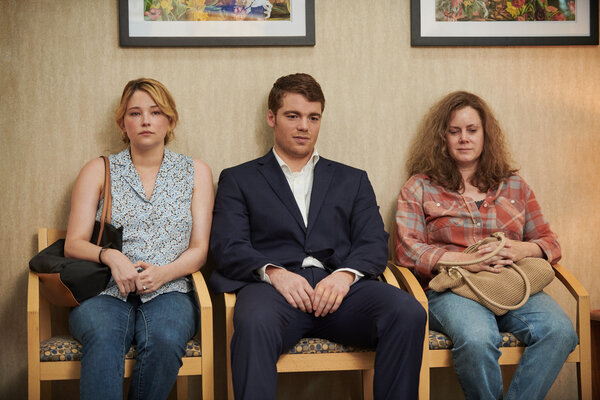 A younger Mamaw (Sunny Mabrey) is shown in a carefully tinted flashback leaving Kentucky as a pregnant teenager, following Highway 23 to Middletown. In the middle decades of the 20th century, the steel mills there, along with factories in other Midwestern and mid-Atlantic cities, were magnets for Appalachian migrants, and this history is part of the background of Vance’s book.

His aim wasn’t only to recount his mother’s struggles with addiction and celebrate his grandmother’s grit. “Hillbilly Elegy,” published in June of 2016, attracted an extra measure of attention (and controversy) after Donald Trump’s election. It seemed to offer a firsthand report, both personal and analytical, on the condition of the white American working class.

And while the book didn’t really explain the election — Vance is reticent about his family’s voting habits and ideological tendencies — it did venture a hypothesis about how that family and others like it encountered such persistent household dysfunction and economic distress. His answer wasn’t political or economic, but cultural.

He suggests that the same traits that make his people distinctive — suspicion of outsiders, resistance to authority, devotion to kin, eagerness to fight — make it hard for them to thrive in modern American society. Essentially, “Hillbilly Elegy” updates the old “culture of poverty” thesis associated with the anthropologist Oscar Lewis’s research on Mexican peasants (and later with Daniel Patrick Moynihan’s ideas about Black Americans) and applies it to disadvantaged white communities.

Howard and Taylor mostly sidestep this argument, which has been widely criticized. They focus on the characters and their predicaments, and on themes that are likely to be familiar and accessible to a broad range of viewers. The film is a chronicle of addiction entwined with a bootstrapper’s tale — Bev’s story and J.D.’s, with Mamaw as the link between them.

But it sacrifices the intimacy, and the specificity, of those stories by pretending to link them to something bigger without providing a coherent sense of what that something might be. The Vances are presented as a representative family, but what exactly do they represent? A class? A culture? A place? A history? The louder they yell, the less you understand — about them or the world they inhabit.

The strange stew of melodrama, didacticism and inadvertent camp that Howard serves up isn’t the result of a failure of taste or sensitivity. If anything, “Hillbilly Elegy” is too tasteful, too sensitive for its own good, studiously unwilling to be as wild or provocative as its characters. Such tact is in keeping with the moral of its story, which is that success in America means growing up to be less interesting than your parents or grandparents. The best thing I can say about this movie is also the most damning, given Mamaw’s proud indifference to anyone’s good opinion of her. It’s respectable.

‘Parasite’ Review: The Lower Depths Rise With a Vengeance

'Onward' Could Be One of Disney and Pixar's Biggest Flops