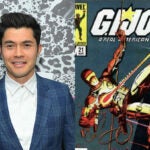 “Snake Eyes,” the third live-action film based on the “GI Joe” toy line, will focus on the origins of the fan-favorite character known for his masked face, black commando uniform and ninja training. Robert Schwentke, the director of “Red” and “R.I.P.D.,” directed “Snake Eyes” for Paramount and Skydance.

The story centers on Snake Eyes’ origins where he tries to become a member of the Arashikage Clan, a ninja clan based in Japan. According to “G.I. Joe vs. Cobra: The Essential Guide,” the Arashikage worked as shadowy assassins for generations, using deception to earn their keep as ninjas, as well as developing a reputation for being able to perform impossible tasks.

Rom-Com March Madness: Make Your Pick for the Charming Championship!

The Ending of ‘Once Upon a Time … in Hollywood’ Is Wild. Let’s Talk.