Nick Robinson will never forget the moment a frog leapt into his mouth while he was making his gorgeous IMAX nature doc film Australia: The Wild Top End. Not just any frog, either, but a frog he'd found in a toilet. And not just any toilet. "It was a horrific toilet, a campground toilet in the Northern Territory," he says, even now grimacing a little at the memory.

Had you washed the frog? 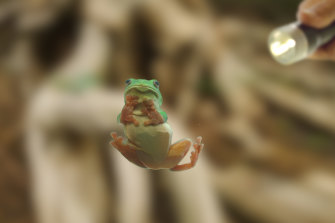 Before he'd even shot a frame of his film, Robinson had travelled around North America, sitting in IMAX screenings and taking special note of what got the audiences of young schoolkids particularly excited.

"You want to have nice cute creatures that come out into the audience," he concluded, because that's the sort of thing that got the youngsters waving their arms in the air, trying to grab the 3D objects they saw floating in front of their eyes. "A frog leaping onto the screen is a great one."

And so it was that one night Robinson and his team got lucky. "We were shooting three frogs on a branch and then one of them leapt onto the camera."

The action was great. The problem was that the leaping critter just became a black silhouette as soon as it hit the lens. So they went searching for another frog, hoping they could place it in the same position, light it perfectly and knit the two shots together in the edit suite so it looked like the same frog, in the same moment.

Cue the frog in the toilet bowl.

Duly rinsed, it was placed on a windscreen with the camera inside the car and Robinson outside, trying to get it to move. "I was 10 centimetres away, going 'boo boo boo', trying to get it to flinch or do something, anything, and it leapt down my throat," he says. "It was awful."

He managed not to swallow it – "no frogs were harmed" – but still "it was the grossest thing that's ever happened to me, a toilet frog leaping into my mouth."

Of course, it is also one of the best moments of his film. But there's one other moment that rivals it – when a massive crocodile turns on the camera that's been following it underwater, seemingly swallowing it whole.

And that's because it almost did swallow it whole. 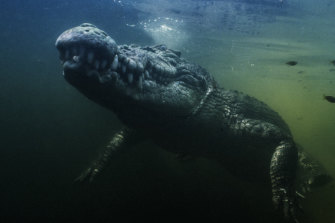 What a croc: The underwater footage is spectacular, but the croc almost stole the show – literally.Credit:Wild Pacific Films

"The camera was attached to a pool-cleaning pole from Bunnings – not exactly croc-worthy. And the croc grabbed it, broke the pole and swam off down the billabong with $120,000 worth of camera in his mouth."

The crew went into panic mode – it wasn't just the camera they'd lose, but all that glorious footage too – before coming up with an ingenious rescue scheme.

"My colleague Caspar was going to hit it on the back with a stick and hopefully it was going to open its mouth and turn its head and I'll reach in and get the camera," says Robinson. "It was a slick operation."

Remarkably it worked; even more remarkably, no one died. "He tapped it, I put my hand in, we got it back, the croc went off unscathed and we got a great shot as well."

Spectacular shots like these are just part of the reason the film seems destined to become a staple at IMAX cinemas around the world. The other is the narration by Aboriginal elder Balang, better known as the actor Tom E Lewis.

The film marks the last screen appearance of the actor who sprang to fame with The Chant of Jimmy Blacksmith in 1978 and who died in August 2018 from a heart attack.

"We were friends," says Robinson, who first worked with Balang on the ABC documentary series Kakadu. "I'd camp at his place in Katherine and the idea for this film really came out of the conversations we had. I'd like to say I wrote it but really most of the words are things I stole from him."

What shines through in the narration is the sense that Australia's Top End is unique, precious and fragile. And full of stories.

"I wanted it to feel like you were on a journey with a person who really knows the place. And he was amazing. He would cry before reading some lines, there was that much emotion going into every word." 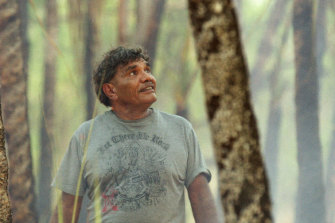 The late Balang, also known as Tom E Lewis, narrates and appears in the film.

Wild Top End is one of just a handful of Australian-made nature documentaries for the extreme-screen. That's surprising, not just because of the abundance of nature in this country that seems perfect for the format, but also because an Australian, John Weiley, is responsible for one of the biggest IMAX hits ever, 1991's Antarctica, a movie that has taken more than $5 million locally (making it the top-grossing Australian documentary here by some margin) and more than $100 million worldwide.

Robinson says part of the reason Weiley's film was so successful was that it arrived at a time when IMAX cinemas were crying out for product, which was incredibly difficult and expensive to make almost 30 years ago.

"In the last five years it's democratised enormously," he adds. "Now it's all digital and it looks better than the 70mm film, to be honest, and we're a crew of three people not a crew of 40."

His film still cost around $4 million and took three years to make, but it's part of a project to build a library of nature footage that can be used to make a raft of projects, both for IMAX and TV. 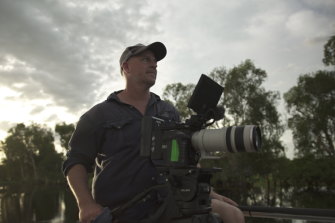 "Suddenly we're making five of them," he says. "The first one [Wild Top End] was an experiment that ate up my home loan and nearly knocked us over. We're still teetering on the edge of survivability, but they're beautiful films, they've got a great message and I'm really proud of what they have to say."

And the lessons he absorbed from watching all those American IMAX sessions appear to be paying off handsomely.

"When I go in there and see those audiences of young kids and how engaged they get with the film, it's like they've been to the Northern Territory," he says. "I know it's making a difference with them, which is great."

Australia: The Wild Top End is at IMAX Melbourne Museum