Two years after the Recording Academy president told female artists to “step up” (and then resigned), women are likely to win all four of the top awards for the second year in a row 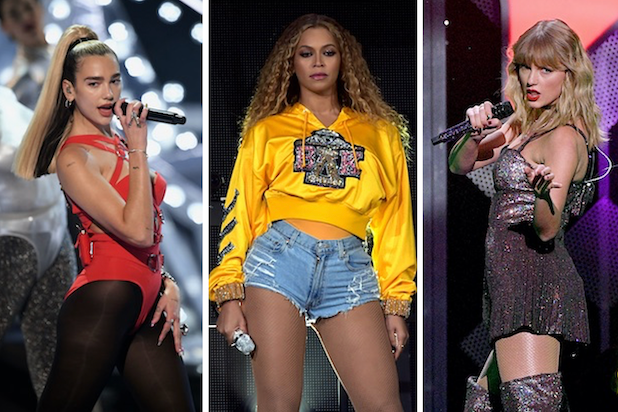 In a way, it’s become a problem of the Grammys’ own making. When the Recording Academy expanded its four general categories to eight nominees in an attempt to be more inclusive and diverse, it created a dynamic that made it easy for the hip-hop music that dominated the nominations to split the vote and lead to wins for pop artists. (By contrast, the Motion Picture Academy changed its system of counting votes to prevent vote-splitting when it expanded its Best Picture category in 2009.)

This year’s nominations are varied enough, particularly in the Album of the Year category, that vote-splitting by genre may not be a huge problem – at least not a problem on the same level as trying to explain why The Weeknd wasn’t nominated for anything. But Beyoncé is the year’s most-nominated artist, with nine, and it wouldn’t be a surprise to see her winning in the R&B and rap categories but losing Record of the Year and Song of the Year to, say, Eilish and Swift. After all, her 24 Grammy wins – second among female artists to Alison Krauss’ 27 – only include one in a general category, the Song of the Year award for “Single Ladies (Put a Ring on It)” in 2010.

However Beyoncé fares, the marquee categories should fall under the heading of poetic justice: If Record of the Year, Album of the Year, Song of the Year and Best New Artist go the way I think they will, it’ll be the second year in a row that the top four awards have all gone to female artists – and also the second year since the resignation of former Recording Academy President Neil Portnow, who resigned his position partly because of the furor that came when he said that women in the industry needed to “step up.”

Of course, last year all four of those awards went to the same female artist, Billie Eilish. A year after she scored only the second sweep of the four general categories in Grammy history, here’s the outlook for those categories at the 63rd Grammy Awards.

Is the third time a charm for Post Malone, who was nominated in this category two years ago for “Rockstar” and last year for “Sunflower?” Probably not, when you consider that he’s up against Dua Lipa, Billie Eilish and double Beyoncé, who has one nomination on her own (“Black Parade”) and one with Megan Thee Stallion (“Savage”).

“Black Parade” was a surprise nominee of sorts, but a surprise that could gain a lot of currency because it was Beyoncé dropping a Black Lives Matter statement on Juneteenth. But it had less impact than “Savage,” which found her joining Megan Thee Stallion for a fiery remix of a song that had already started a TikTok dance craze. “Savage” will probably clean up in the rap categories, but it feels like the kind of record whose Grammy success stops when you get to the general categories.

Then there’s the battle of the last two Best New Artist winners. A year after giving Billie Eilish everything, can voters resist awarding a new song of hers called “Everything I Wanted?” Maybe they can resist, since they also have the chance to show how smart they were to give Dua Lipa the Best New Artist award two years ago. Plus, “Don’t Start Now” is the kind of irresistibly exuberant workout that has won in this category with “24K Magic” and “Uptown Funk” in recent years.

With the oddest slate of nominees in any of the four general categories, Album of the Year seems to be a free-for-all (Coldplay? Jacob Collier?) but quickly comes down to a small number of contenders. It’s not inconceivable that vote-splitting could clear a path for Haim, and there’s obviously affection for Post Malone since he’s one of only two artists nominated for Album of the Year, Record of the Year and Song of the Year – but really, this seems to be between Dua Lipa and Taylor Swift.

If Swift wins, she’ll join the elite company of Frank Sinatra, Stevie Wonder and Paul Simon as the only performers to win this award three times; she won for “Fearless” in 2010 and again for “1989” in 2016. But did the Grammys sour on her after those wins over Beyoncé and Kendrick? After all, her 2017 album “Reputation” won a pop Grammy but wasn’t nominated in the general categories, while 2019’s “Lover” landed three nominations, including Song of the Year for the title song, but didn’t win anything.

Dua Lipa, on the other hand, is a fresh face at the Grammys, only two years removed from her Best New Artist victory, and she’s the other artist who’s nominated in the album, record and song categories. Still, the gently persuasive introspection of “Folklore,” which was recorded during the pandemic and unexpectedly released in July, made it the right album at the right time. Dua Lipa can win, but Swift probably will.

H.E.R.’s “I Can’t Breathe” captures the urgency of last summer’s protests over police killings of Blacks, while JP Saxe and Julia Michaels’ “If the World Was Ending” summons up the ache of pandemic isolation. The former in particular has a chance to win in this category, but so do the songs from Billie Eilish, Dua Lipa and Beyoncé – and since the same song has won Record of the Year and Song of the Year six out of 10 times over the last decade, it stands to reason that if “Don’t Start Now” wins for record, it should also win for song.

Still, the Grammys can gravitate toward an appreciation of a more classic kind of songcraft, which would fit Taylor Swift’s “Cardigan.” Swift has never won in this category despite five nominations, but it feels as if that’s ready to change.

No, Miley Cyrus’ little sister, Noah, doesn’t really have much chance to win this award. (But hey, it’s an honor just to be nominated.) On the surface, this appears to be a race between Megan Thee Stallion and Phoebe Bridgers, with Doja Cat a potential spoiler. Megan had more impact in 2020, but Bridgers feels more like the kind of act that wins this award. And this is a category where vote-splitting could definitely hurt the hip-hop artist more than the alternative-rock one.

Still, it’s worth noting that voters have a history of pulling out some big surprises in this category. So maybe Noah Cyrus should write a speech, just in case.

From Daniel Craig to the Cast of Game of Thrones: Here Are All the Star Wars Cameos You Missed