“The Rise and Rise of Michael Rimmer” involved major names like John Cleese and Harold Pinter and anticipated U.S. and British politics. Why didn’t it catch on? 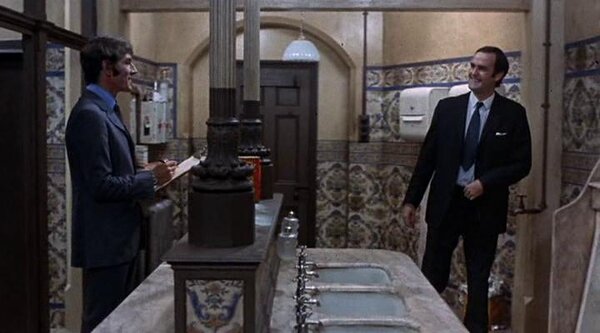 If you scan the roster of British stage and screen luminaries who created “The Rise and Rise of Michael Rimmer,” you might wonder why you’ve never heard of this vicious 1970 satire starring Peter Cook as an amoral ad man who manipulates polling data to ascend to the heights of political power. In addition to Cook, the cast includes the Monty Python founders Graham Chapman and John Cleese. Denholm Elliott plays an unctuous pollster, and the playwright Harold Pinter gives a memorably nasty performance as a talk-show host.

“In my life, I’ve worked with three people who were geniuses or touched with genius, and they were all in this film — Peter, John and Harold Pinter,” recalled the film’s director, Kevin Billington, who collaborated on the script with Cook, Chapman and Cleese.

True, the film drags in parts, and it suffers from some gratuitous slapstick — evidence of its creators’ sketch comedy origins. But “Rimmer” is astute, ambitious, original and unsparing, and the reasons for its disappearance have little to do with its quality. Timing is everything in comedy, and, as it turns out, this was the rare film that was both slightly behind and decades ahead of its time.

It was intended for a spring 1970 release, which would have coincided with the general election when the Conservative leader Edward Heath upset the Labour Party prime minister, Harold Wilson. But the movie didn’t come out until that November, when its anticipation of a surprise Conservative triumph was a foregone conclusion.

“The distributors decided it was too sensitive and delayed it, so by the time it came out, it was old news,” said the composer John Cameron, who contributed the film’s twangy, swinging ’60s score. 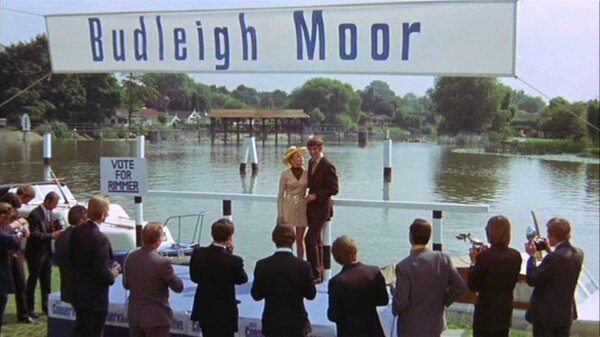 “Rimmer” was released to mediocre reviews, and, despite a 2006 DVD release in Britain (2011 in the United States), has never made any sort of comeback. (It’s available on YouTube.)

“I went to a club in Mayfair for a little drinks party to celebrate the opening, and that was it; it all just faded away,” Cleese said. “I never thought the film was that strong, but that was very much colored by the fact that it made no public impact at all. When you’re young, and something you’re working on doesn’t make an impact, you tend to presume that you should forget about it, but perhaps I was too harsh in my judgment.”

Maybe so. For today, the film’s observations on the intersection of media and politics seem uncannily prescient, anticipating the triumph of two populists on opposite sides of the pond: Donald J. Trump and Boris Johnson. One could easily imagine the movie as part of a TCM series on visionary political satire, featuring “Network” (1976); “In the Loop” (2009); and “The Candidate” (1972), the Michael Ritchie-Robert Redford film that seems, in particular instances, to pay direct homage to “Rimmer.”

“The original idea for the film,” Cleese said, “was that we realized that if you were a pollster, you could manipulate public opinion and achieve phenomenal power as a result.”

Cameron said the notion that “politics could be manipulated by polls and by advertising was not at all an unusual concept for us.” He added, “That realization got sort of lost in the ’80s and ’90s when the machine was more effective in burying it. In the ’60s and ’70s, the machine wasn’t as good, so we saw through it rather more easily.”

The film’s plot takes the timeworn story of a young man’s heroic journey from stock room to boardroom and gives it a cynical spin. When Michael Rimmer arrives at financially challenged Fairburn Advertising, he does so with no apparent qualifications or job title other than the one he gives himself (“Rimmer, Coordination”).

Cook was criticized for giving a wooden performance in the title role, but his lack of affect makes his character all the more chilling. He delivers his lines with detached amusement and calculating menace, suggesting a slightly less sympathetic version of his turn as the devil (a.k.a. George Spiggott) in 1967’s “Bedazzled.”

“Rimmer was somebody who wasn’t left or right; he didn’t represent anything at all. He was, in a funny way, the future,” Billington said. “He was very good-looking, but there was nothing there.”

Simply by virtue of his dapper suits, his superior smirk, his unflappable self-confidence and his lack of scruples, Rimmer rises rapidly, transforming a stodgy little agency into a hub of crass advertising. One of his campaigns, in which a vile-tasting candy is repurposed as a marital aid, riffs off the controversial Cadbury Flake commercials of the time, which played none too subtly on the product’s phallic appearance.

“We were taking the piss out of certain soft-porn advertising that was becoming popular then,” Cameron recalled.

The film’s leering objectification of women makes for a sporadically infuriating viewing experience.

“Having just watched it again, I was totally shocked to see Arthur Lowe’s hand between my thighs while he supposedly was searching for a book,” recalled Valerie Leon, who played a secretary to Lowe’s besotted, incompetent executive.

As Rimmer’s portfolio grows, he shifts focus to data analysis, renaming the agency Fairburn Polls and outfitting its offices with whirring computers and securing front-page headlines with a Kinsey Report-like survey of British sexual habits. (“Do grocers indulge in sexual intercourse twice as often as butchers?”) After he hypes his sex survey on a talk show, with Pinter’s host mercilessly embarrassing an adulterous couple in the audience, Rimmer co-opts a rival pollster (played by Elliott), consolidates his power and moves into politics.

Rimmer’s polling successes make him a trusted adviser to both the prime minister and his challenger, each of whom offers him a seat in Parliament. Though the film mercilessly bashes both left and right, Rimmer rigs the election for the Conservatives by giving the prime minister intentionally bad advice and, in one of the film’s funniest sequences, sabotaging his teleprompter.

Morphing from comic fantasy to nightmare, the film seems to anticipate “The Ruling Class” (1972), in which a disturbed man ascends to the House of Lords once he stops thinking he’s Jesus Christ and starts thinking he’s Jack the Ripper. Rimmer concocts a sex scandal to acquire an influential cabinet post; he murders the new prime minister, manipulating footage of the incident so that he appears to be a hero, whereupon he becomes the logical heir apparent to 10 Downing Street. Once installed as head of government, he delivers all too well on his promise of democratic reforms, incessantly polling his citizens on even the most trivial matters until they become so worn down that they willingly submit to fascism — or, as Rimmer describes it, “a more streamlined form of presidential government.”

Though the basic outline of “Rimmer” may seem prophetic, so do its specifics: Pinter’s indefatigable, election-night quizzing of so-called experts before any votes have been counted foretells the vapid filler that has become a hallmark of the 24-hour news cycle; the way Rimmer skews his data has echoes in Cambridge Analytica. Politicians live at the mercy of speechwriters and spin doctors; manipulated video is passed off as truth; all the while, polls guide everything, from how you worship to whom you marry.

Toward the end of the film, when a mysterious virus with no known antidote appears and the Postal Service becomes a pawn in Rimmer’s political strategy, it’s hard not to see modern parallels, and wonder whether “The Rise and Rise of Michael Rimmer” might have been released not two seasons too late but 50 years too early.

Billington recalled being on a flight with Peter Cook a few years later: “He said, ‘We were ahead of our time.’ Only about a month ago, Harold Pinter’s widow, Antonia, called me, and she said she’d just watched the film. She said, ‘It could be now.’”