Lindsay Lohan stars as an amnesiac who falls off a mountain and in love in this Netflix holiday romance that is all too familiar. 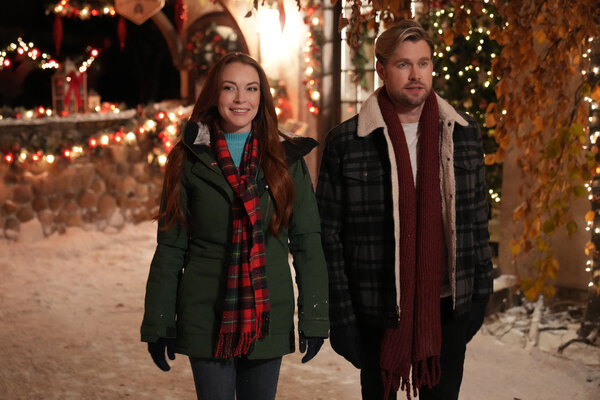 “Falling for Christmas” isn’t a Hallmark Channel original, but it certainly resembles one. Stop me if you’ve heard this one before: A gallant blue-collar widower strikes up an improbable romance with a wealthy, stuck-up heiress betrothed to a cocky himbo who is written expressly to be disliked. The rich young woman and the blue-collar guy don’t have much in common at first, but she soon shows a predilection for domestic labor, making it clear that she can be reformed. But her fiancé is irredeemable, because he’s on his phone a lot and uses terms of endearment like “angelcakes.”

The obligatory twist on the formula in this case is that the heiress, Sierra (Lindsay Lohan), comes down with amnesia after a skiing accident, leaving the generous Jake (Chord Overstreet) to care for her over the holidays at his rustic lodge. (Her amnesia seems curiously selective: She doesn’t remember her name or where she’s from, but everything about her personality remains intact.) As they wait for her memory to be recovered, Jake and Sierra bond over various nondescript holiday activities, most of which feel like they were improvised on set — gingerbread house food fights, cavorting in the snow.

Meanwhile, Jake is struggling to keep his lodge afloat, which he blames on “people booking Airbnbs.” It’s interesting to consider the parallels between the effect Airbnb has had on the hospitality industry and what streaming platforms like Netflix have done to traditional broadcasters like the Hallmark Channel. The director, Janeen Damian, doesn’t seem to have considered it. At one point, in a truly shameless bid for self-referential humor, Sierra is disrupted in bed by the gonging tu-dum of the Netflix logo and an ad for another Netflix holiday movie. If this is the standard we’re dealing with, I’d rather have amnesia.

Does 'Terminator: Dark Fate' Have a Post-Credits Scene?