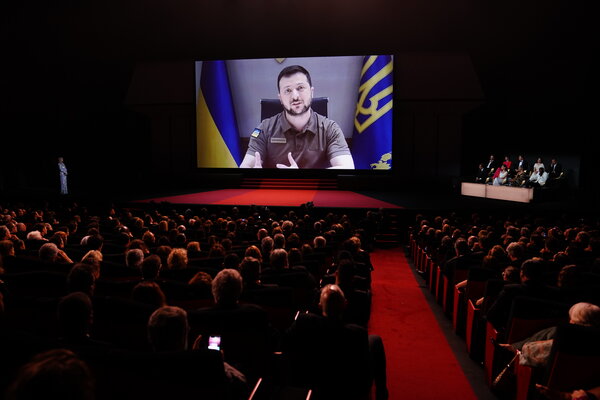 The war in Ukraine is casting a long shadow over this year’s Cannes Film Festival. On Tuesday, Volodymyr Zelensky, the country’s president, addressed the event’s opening ceremony, with stirring rhetoric and Charlie Chaplin quotes.

But the conflict had already had an impact on the festival long before Zelensky’s appearance. Within days of Russia’s invasion, in February, some of Ukraine’s leading movie directors and producers called on film festivals worldwide to boycott Russians, as a sign of support. Cannes said in a statement in March that it would no longer “welcome official Russian delegations, nor accept the presence of anyone linked to the Russian government,” but added that it would not ban Russian directors.

There is one major Russian director at this year’s event: Kirill Serebrennikov, who is competing for the Palme d’Or with “Tchaikovsky’s Wife.” The Cannes press office told The Hollywood Reporter it had approved “only a few” Russian media outlets to cover the event, and that all of those outlets opposed the war. It was unclear, however, if any state news outlets had requested accreditation, and the festival did not respond to emailed questions.

Two movies by Ukrainian directors are on the festival’s program: Maksim Nakonechnyi’s “Butterfly Vision” and Sergei Loznitsa’s “The Natural History of Destruction.” But even those choices might stir controversy. In March, the Ukrainian Film Academy expelled Loznitsa, because he did not support its call to boycott Russian movies.

“When I hear calls to ban Russian films, I think of my Russian friends — decent and honorable people,” Loznitsa told The New York Times in March. “We cannot judge people by their passports,” he added: “They are victims of this war, just like we are.”