A year after the great and good at the Cannes Film Festival signed a pledge last year to strive for gender parity by 2020, the world's most important film event still seems to have a lot of female trouble.

Trouble with the numbers of films by women, trouble with mothers and babies, the resurgence of trouble with female footwear and trouble with Quentin Tarantino, standard-bearer for fanboys and manboys everywhere, who simply refused to comment when a reporter asked why the only  significant female character in his film Once Upon a Time in… Hollywood had so few lines.

"I reject your hypotheses," he snapped in reply. Game over. 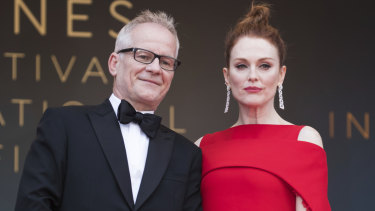 Frémaux was on the defensive. "People ask Cannes to do things other organisations are not expected to do," he grumbled. "We are expected to be perfect – and of course we strive to be perfect. I feel like asking them [journalists], why don't you give up your position and offer it for two women?"

What he had agreed to do when he signed the pledge was strive for equality on juries and among selectors; there had been "many changes" in the organisation itself. But he had never signed up to anything that would influence which films were selected and he never would.

With equal numbers now showing up in the short film competition and student film section, there would be more features by women flowing into the festival soon enough. "Cannes is only at the end of the chain," Frémaux said.

A riposte of sorts came two days later from Julianne Moore in a masterclass where she said she supported quotas for women and minorities. "We will have to make major changes to reach parity. That's just a fact," she said. "So I do believe in quotas … You have to open doors." 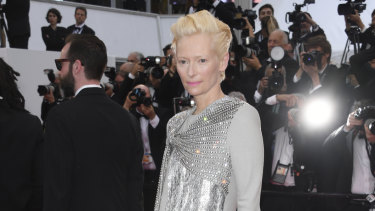 Actress Tilda Swinton poses for photographers at the premiere of The Dead Don’t Die on Tuesday. Credit:Arthur Mola/Invision/AP

Tilda Swinton offered another argument in a press conference for Jim Jarmusch’s zombie film The Dead Don’t Die. "Women have been making films for 11 decades now," Swinton said. "There are countless films by women. The question is why don't we know about them."

One answer is that a problem has to be understood before it can be addressed.

Why the festival would choose to present a Palme for lifetime achievement to Alain Delon is simply baffling.

The 83-year-old French actor, a supporter of Jean-Marie Le Pen's far-right National Rally, has publicly admitted to "slapping" women after his estranged son said he had broken eight of his  mother's ribs.

A recent survey named him the most unpopular celebrity in France; just before the festival, 18,000 people signed a petition opposing the award. 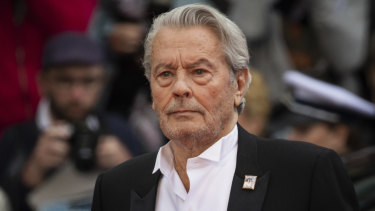 Alain Delon at the premiere of A Hidden Life in Cannes on Sunday.Credit:Vianney Le Caer/Invision/AP

Frémaux’s response was to say they were "not giving him the Nobel Prize". Delon was entitled to his views, although he didn't know much about them, he added. "It's very difficult to reward or honour anyone today, because you have a political police that falls on you."

Then there are the little things. Four years after Heelgate, when there was an explosion of female exasperation with the festival's door policy demanding women wear high heels on the red carpet, British documentary maker Asif Kapadia (who had a hit with the Amy Winehouse documentary, Amy, and has a film about footballer Diego Maradona in the festival) said his wife had been turned away for wearing insufficiently uncomfortable shoes.

And in a year when a new drop-in creche and nanny service was touted as the face of a newly family-friendly festival, another British filmmaker was refused entry to a market screening of her own film – which, ironically, was about the trials of a single mother – when she arrived with her four-month-old baby.

Greta Bellamacina said she was told she would have to get the infant a 300 euro ($A486) delegate's pass, which would take two days to process. The festival apologised and changed the entry procedure but, a week later, the incident was reportedly described as a PR stunt.

The fact is that the Cannes Film Festival is an old and heavy ship that is hard to turn around. The
topless bikini girls who used to pose for pictures on the beach may have gone, but the nightly red carpet glamour pageant is just as anachronistic.

This year's poster features the great French film-maker Agnès Varda, who died in March, but the intended design featured the young Alain Delon.

Sitting in a theatre watching Tarantino's Once Upon a Time in… Hollywood, surrounded by men
laughing at a running gag about Brad Pitt's character having successfully murdered his wife, there is
a sense that Cannes really hasn't got it yet.