The actor stars in this Civil War-era drama directed by Antoine Fuqua and inspired by a shocking photograph of an enslaved man. 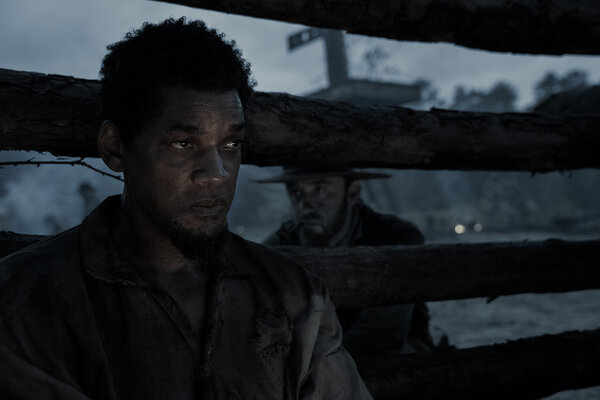 For much of the period drama “Emancipation,” the promise of its title seems cruelly out of reach. In 1863, freedom seems near-impossible for the enslaved Black Americans in the Old South, whether they’re working on its plantations or running through its swamps. That promise, though, is about all that this movie’s resilient hero has during a relentless, brutal, grim journey that takes him across a hellscape filled with terror and suffering.

There are no benevolent white belles and polite gentlemen in “Emancipation,” no trace of the grotesque plantation fantasies so beloved by old Hollywood. That’s to the movie’s point and purpose, as it sets out to show the barbaric price that slavery exacts on human beings, both individually and collectively. In this respect, the movie functions as a necessary corrective to the familiar, big-screen fictions about the American slave trade even as — in its sweep and narrative beats, in its emphasis on a heroic individual and in its casting of Will Smith — it is also very much a propulsive, Hollywood-style action-fueled adventure.

The country has been at war for two years when Peter (Smith) is removed from the sprawling Louisiana planation where he labors and lives alongside his wife, Dodienne (Charmaine Bingwa), their children and many other enslaved people. He has been forcibly enlisted to work on behalf of the rebel cause, to the displeasure of the plantation’s owner. Peter, after all, is valuable property. The family’s separation is a rapid, violent churn of screams and threats, and soon Peter is encaged on a horse-drawn cart with other enslaved men, en route to an expansive camp to build railroad tracks for the Confederacy.

The director Antoine Fuqua has carved out an estimable career with a string of muscular action movies (most famously “Training Day”), and he brings his characteristic combination of panache and bluntness to “Emancipation.” It’s fast, intense and uncompromising in its representation of violence. Given the movie’s sober subject, it’s also, wisely, less visually baroque than most of his movies, even if its images — including of the silent and alone Peter on the run — speak more eloquently and powerfully than any of its words do. (Fuqua and the cinematographer, Robert Richardson, who’s best known for his work with Quentin Tarantino, have mercifully desaturated the color palette.)

The scenes at the railroad camp are vicious and unsparing, and nearly overwhelm the movie with their abject savagery. Here, the shackled and barefoot Peter is brought to help the Confederate war machine. Alongside other men, he staggers through mud hauling heavy pieces of timber while wearing something that looks like a plow harness. It’s a sharp, nauseating detail that illustrates the physical demands of Peter’s labor. More important, it telegraphs that, for their captors, these enslaved men are nothing other than beasts of burden. Smith is very effective here and in later scenes after Peter escapes, and the actor brings feeling and intensity to a role that is lamentably short of nuance and character insight.

Peter’s time at the camp is exceedingly hard to watch, and more than once, I flashed on Laszlo Nemes’s “Son of Saul,” a Hungarian film largely set in the Auschwitz death camp. Like that film, “Emancipation” is unblinking in its depictions of intentional and capricious sadism; here, men are driven to work until they fall, their bodies tossed in a mass grave. Part of this movie’s power comes from its insistence that you look at the near-unbearable, that you confront slavery as a crime against humanity rather than the perverse myth of the so-called Lost Cause enshrined in countless paintings, books, films and statues.

Written by William N. Collage, “Emancipation” was inspired by a famous, widely circulated photograph of a horrifically scarred former enslaved man. Often referred to as “The Scourged Back,” the image — also identified as “Escaped slave Gordon, also known as ‘Whipped Peter’” — was published with an article about him in Harper’s Weekly in 1863. An illustrated version of the photo was flanked by two images purported to be of the same man, one of him dressed in tattered clothing and the other in a Union uniform — a triptych that creates a kind of narrative arc that the movie has fictionally expanded on.

The photograph served as a testament to the annihilating inhumanity of slavery, and in some attenuated fashion, that is also how “Emancipation” can be appreciated. The movie is flawed; it features far too many aerial shots and one unfortunate scene with an alligator edges into exploitation-cinema absurdity. Fuqua’s tendency toward overstatement also means that the movie lacks modulation, which, among other things, makes it difficult for Smith to do much other than square his jaw and push forward. Yet Peter’s story and Smith’s warmth carry you through this movie, which has heart and conviction and toughness — the image of the pretty little white girl who points at Peter while screaming “runaway!” will rightly haunt you.

Every MCU hint and Easter egg from the Spider-Man: No Way Home trailer