A pampered dog finds himself on the streets in this routine animated comedy. 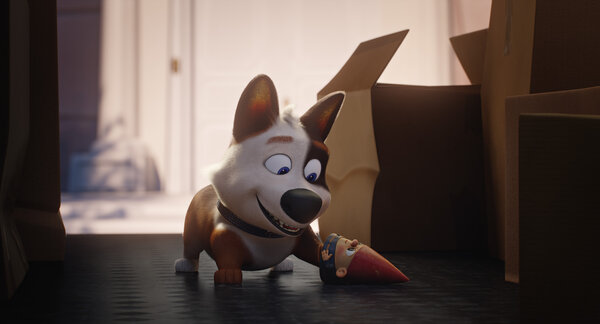 Home is at the center of “Dog Gone Trouble,” about a lost pooch whose owner has just died. But this Netflix animated family feature is nothing to write home about.

It begins with Trouble (voiced by Big Sean) living lavishly in a mansion, a far cry from the street-dog lifestyle. After his rich companion, Mrs. Sarah Vanderwhoozie (the always-delightful Betty White, who is criminally wasted here), passes on, her greedy niece (Marissa Jaret Winokur) and nephew (Joel McHale) swoop in to get their hands on Mrs. Vanderwhoozie’s belongings. The catch? If they want her riches, they must take care of her diva dog, too.

The setup of Kevin Johnson’s film has promise: a charming montage of Trouble and Mrs. Vanderwhoozie. The crazy, money-hungry relatives you’ll wish had more screen time. Then, a moving scene with Trouble pawing at extravagant paintings of Mrs. Vanderwhoozie and wondering, tearfully, why she’s gone.

Once Trouble ends up in what he calls the “jungle” — for the other dogs, including the soul-crushed loner Rousey (Pamela Adlon), this is the street — “Dog Gone Trouble” settles into overdone mutt-movie territory. We essentially get a story about the true meaning of home, explored with more emotional sophistication in other canine-centric animated films (“Bolt,” from 2008, comes to mind). But another one of its themes — a no-label civilization, briefly touched upon when Rousey snaps at Trouble after he calls her an “outside dog” — is far more engaging and culturally contemporary.

Instead, the film keeps it basic, right down to a central girl character named Zoe (Lucy Hale) who shares a common outsider bond with Trouble. She’s a stock-millennial, wannabe-musician bore, and her Memoji look does her — and the other humans, animated similarly — no favors.

A bunch of dancing squirrels making highly suggestive nut jokes is about as funny as it gets. Elsewhere, Snoop Dogg voices a Doberman named Snoop, who raps a rundown of the plot when the credits roll. That the movie can be summed up in a silly, simple dog rap indicates there wasn’t much of a story here to begin with.

Is Chris Hemsworth Interested in Making 'Asgardians of the Galaxy'?