The star of Damien Chazelle’s epic was set on becoming a writer-director. Even after landing a part in an indie film, he wasn’t sold on acting. Then Hollywood called.

A VHS tape of “Peter and the Wolf,” the Disney animated short from 1946, played on repeat at home when Diego Calva was growing up in the 1990s.

Both terrified and tantalized by that first cinematic obsession as a child, Calva discovered the power of audiovisual storytelling in the unnerving leitmotif of the villainous wolf.

“Without being able to put in words, it made me realize that I was a little box of feelings and that movies could make them surface,” Calva explained, speaking in Spanish. “That hooked me.”

After only one major independent movie, the actor from Mexico City is now starring alongside Brad Pitt and Margot Robbie in his first mega-budget American production: the director Damien Chazelle’s silent-era revel “Babylon,” about the grotesque origins of the Hollywood film industry and why movies fascinate us.

Calva, 30, recently received a Golden Globe nomination for best actor in a musical or comedy for his performance as the Mexican-born Manny Torres, who slowly moves up the ranks in 1920s Hollywood — from catch-all production assistant to influential producer. 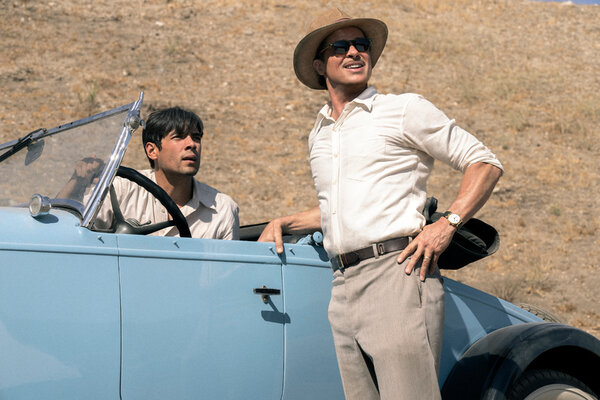 His character functions as the story’s driving force: as both the link between Pitt’s and Robbie’s characters — two successful, often deranged actors — and as the viewer’s guide to this decadent world. Calva gives Manny an adoring naïveté about the movies, which fuels the character’s determination to become a part of them, even if his devotion eventually backfires.

While Calva worked hard to win the part, performing wasn’t his original dream. Long before Hollywood called, Calva had ambitions to become a writer-director, as he explained in an interview at a hotel in Beverly Hills. The tall, easygoing novice wore a preppy look comprised of a gray sweater vest over a white T-shirt, black slacks and a pair of shiny black shoes.

From a young age, he surrounded himself with friends a few years older who were making short films. Like Manny, Calva helped out in miscellaneous positions behind the scenes of those independent shoots, whether it was catering or holding a boom mic.

On one such set, he was asked to step in for an actor who hadn’t shown up, which led to more jobs, mostly unpaid, in front of the camera. He eventually landed his first lead in a feature film, appearing in the director Julio Hernández Cordón’s 2015 gay drama “I Promise You Anarchy,” a festival hit.

The story follows two male skateboarders in a tumultuous romance, as they become involved with criminals trafficking human blood on the black market.

On a friend’s recommendation, Hernández Cordón checked out Calva’s Facebook profile. Afterward, the director eagerly reached out to Calva, who had been skating since early adolescence.

“Within five minutes of meeting Diego, I knew he was the right person for the part because of his confidence and charisma,” Hernández Cordón said on a video call from Mexico City.

While there was no formal casting process, Calva and his co-star, Eduardo Eliseo Martinez, had to agree to the intimate scenes in the screenplay. Their openness to portraying intense desire solidified the director’s trust in them.

“I’ve always considered myself a bit punk and I love skating,” Calva said, “so the movie was like bringing to life some situations I was already going through at the time.”

As Hernández Cordón pointed out, Calva straddles the line between his middle-class upbringing, raised by a single mother who instilled in him an affinity for the arts, and the street smarts attained by wandering a large metropolis with kids from other socioeconomic backgrounds.

“I knew Diego had an innate talent, but I worried that he wouldn’t realize the gift he has,” Hernández Cordón said. “I’m very happy that he’s starting a new chapter with ‘Babylon.’”

That introduction to performing professionally, however, didn’t dazzle Calva enough to make him push his filmmaking aspirations aside.

He went on to enroll at the Centro de Capacitación Cinematográfica, one of Mexico’s pre-eminent film schools, to study directing. But to stay afloat financially, Calva took on acting work, which created a conflict with the institution’s policies.

Ultimately, he chose to leave the school and returned to acting full time, appearing on TV series and in supporting parts on the big screen, and putting on acting workshops for children.

It was during this period of doubt about his future that the opportunity to audition for the third season of the Netflix hit series “Narcos: Mexico” arrived. He aced it. And while playing the real-life drug lord Arturo Beltrán Leyva on the show introduced him to production on a larger scale, Calva couldn’t anticipate what would soon come his way.

As Damien Chazelle searched, in late 2019, for a fresh face to star in “Babylon,” he came across Calva’s image amid a stack of headshots. The Oscar-winning director was struck by the actor’s gaze.

The character he envisioned Calva for, Manny, is partly inspired by two Latin American filmmakers whose careers started to take off in the 1920s: Enrique Juan Vallejo, the Mexican cinematographer and director, and René Cardona, the prolific Cuban-born director.

Calva submitted several self-taped auditions and eventually met with Chazelle online during the early months of the Covid pandemic. The more intrigued Chazelle became by Calva, the more it also became apparent that the actor had limited experience and that his English needed work.

Chazelle and Olivia Hamilton, his wife and a producer of the film, “debated whether it was a gamble worth taking with Diego,” Chazelle said. “She had this full 100 percent unwavering belief in him.”

Several months into the casting process, Calva began to feel overwhelmed by the life-changing magnitude of the opportunity, which seemed closer to materializing but not yet certain. Aside from executing Chazelle’s increasingly specific notes about his line delivery, improving his English became a priority.

In late 2020, Calva finally traveled to Los Angeles to meet with Chazelle and Robbie, who would play Nellie LaRoy, a fictional starlet and Manny’s love interest.

Using his cellphone, Chazelle filmed the chemistry read between Calva and Robbie in his backyard. Their palpable energy convinced him that Calva could deliver on his potential.

“He had this kind of Al Pacino-level ability to command the camera without seeming to do anything,” Chazelle said. In fact, Pacino’s arc from innocence to corruption as Michael Corleone in “The Godfather” films served as a key reference for Calva’s turn.

Robbie admired Calva’s ability to improvise in his second language.

“It’s so transformative to act with him because he’s so present that you forget you’re doing a scene,” Robbie said. “He was the greatest scene partner I could ever wish for.”

For Calva, the parallels between him and Manny feel almost like docu-fiction. “I identify with him in wanting to belong in the world of the movies,” he said. The actor’s wide-eyed reactions to an epic set piece early in the sweeping story came from genuine emotion.

By the time one of the final scenes was shot, in which Manny watches the musical “Singin’ in the Rain” and cries, Calva had been immersed in the universe of Chazelle’s movie for nearly eight months. For that emotional moment, the director asked him to replay “Babylon” in its entirety, from Manny’s point of view, via facial expressions.

“It’s such a crazy piece of direction, and he does it,” Robbie said. “You feel everything you’ve felt for the last three hours play out on his face in a few seconds.”

“I needed an actor who could really dig deep and summon something,” Chazelle said. “It’s the hardest kind of acting to do because you don’t have the benefit of words, language or even body movement. You have to do it all just in your face, in your eyes.”

As Manny rises in Hollywood, he loses perspective, even denying his Mexican identity and claiming to be from Spain. Calva, grounded in advice from his mother, whom he considers his best friend, said he believed that wouldn’t happen to him.

“I don’t want to lose my childlike outlook on life, my ability for wonder,” Calva said. “I want to remember the road back home and know that if I make mistakes I won’t lose myself.”

For now, Calva plans to remain in Mexico City and build his burgeoning career, but whenever he’s wanted on this side of the border, the actor will joyfully oblige.

“They invited me to this party,” Calva said with a hint of mischievous glee. “Getting me out of Hollywood is going to be difficult.”

Two young YouTubers, aged 8 and 12, are selling tens of thousands of their own-brand magazines on newsstands