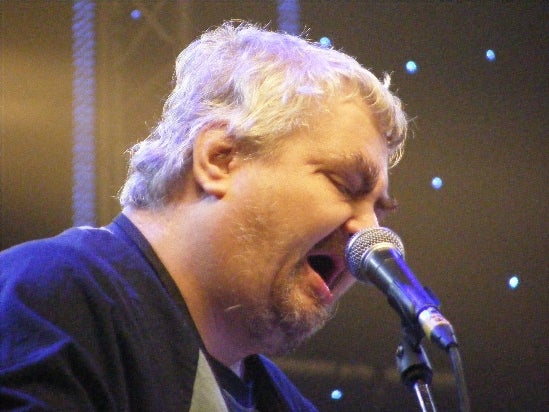 Daniel Johnston, the legendary Austin-based singer/songwriter and visual artists who was the subject of the 2005 documentary “The Devil & Daniel Johnston,” has died from a heart attack at the age of 58. Johnston’s manager, Dick Johnston, confirmed the news of Johnston’s death to TheWrap.

Johnston’s lo-fi, quirky folk tunes were covered by the likes Tom Waits, Pearl Jam and Yo La Tengo. Kurt Cobain could be counted as a supporter, most notably when he was spotted wearing a t-shirt sporting Johnston’s “Hi How Are You” album cover.

Born in Sacramento before moving to West Virginia and finally settling in Austin in the 1980s, Johnston first rose to prominence in Texas for his home-recorded albums, beginning with 1981’s “Songs of Pain.” He had 17 albums overall. Johnston’s last album, 2012’s “Space Ducks,” featured a slew of guest musicians including Unknown Mortal Orchestra, Eleanor Friedberger, Deer Tick, Fruit Bats, and Lavender Diamond.

In 2005, “The Devil & Daniel Johnston” doc sparked new interest in the singer. The film outlined Johnston’s struggles with manic depression and schizophrenia. It also showcased an immensely talented songwriter who was embraced by a rabid cult following.

In recent years, according to the Austin Chronicle, his physical health deteriorated — which included falling, hospitalization and frequent adjustments to his medication, his sister Margy Johnston said.

His final tour took place in 2017, where he was supported by the likes of Jeff Tweedy & Friends, Built To Spill, the Preservation All-Stars, Ben Lee, the Districts and Modern Baseball.

A tribute to Johnston, which took place in Austin in January to celebrate his 58th birthday featured the likes of Flaming Lips, the Black Angels, Gavin DeGraw, Bob Mould among others.

Johnston had been working on a new album with Austin-based producer Brian Beattie for “years” he told the Chronicle and Vulture reported in April that the album would be titled “If.”