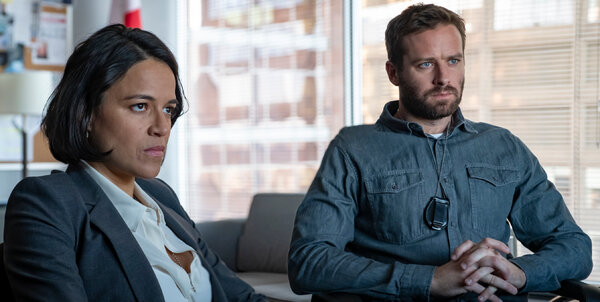 Applying the panoramic approach of Steven Soderbergh’s “Traffic” to the subject matter of, well, “Traffic,” “Crisis” examines the intractability of the opioid epidemic through a three-pronged narrative. The writer-director, Nicholas Jarecki, who made the engrossing, “Bonfire of the Vanities”-ish thriller “Arbitrage” (2012), awkwardly pretzels a checklist of social problems into the form of a drama.

The issues — from addiction itself to the flawed incentives at institutions that might prevent it — demand a more expansive treatment. Compared with the HBO series “The Wire,” which covered similar material, almost any pretzel would seem too small.

The most suspenseful thread in “Crisis” involves Jake Kelly (Armie Hammer, who has recently been accused of sending bizarre messages on social media and other troubling behavior; he has denied wrongdoing). Jake is introduced as a drug importer but quickly revealed to be an undercover D.E.A. agent planning a bust that straddles both sides of the United States-Canada border. His sister (Lily-Rose Depp) is an addict herself.

In almost the flip side of that story, Claire Reimann (Evangeline Lilly), a hockey mom and recovering opioid addict, turns sleuth and potential vigilante after a tragedy related to her son.

Hopping between Detroit and Montreal, the film is well-paced but often strains credulity. Jarecki brings Claire out of character to juice the plot, and Dr. Brower’s fate is resolved in an unconvincing coda at odds with the preceding cynicism.

Crisis
Rated R. Violence and drug use. Running time: 1 hour 58 minutes. In theaters. Please consult the guidelines outlined by the Centers for Disease Control and Prevention before watching movies inside theaters.