The New York International Children’s Film Festival faced unusual challenges in developing a cinematic celebration during a pandemic. Now the festival, which will present its first all-streaming version from Friday through March 14, is offering its audience some unusual challenges, too.

In addition to unblinking views of young people grappling with fractured families, bullying and puberty, the festival is showing what may be its most serious and mature feature yet: “Beans,” a fictionalized autobiography by the Canadian filmmaker Tracey Deer. The action unfolds during what is now known as the Oka crisis, a conflict in 1990 between the Mohawk people and the Canadian authorities over land rights.

The central character, a 12-year-old Mohawk girl nicknamed Beans, played by Kiawentiio Tarbell, begins a personal rebellion that parallels her community’s uprising. Recommended for viewers 14 and older, the film includes obscene language, violence and a harrowing scene in which an older boy tries to pressure Beans into performing oral sex. It’s hardly what you expect at a children’s festival, but the organizers, who this year are delivering 14 features, seven programs of short films and more than a dozen livestreamed events — all available for the first time to families across the country — found the movie too accomplished and relevant to put aside. 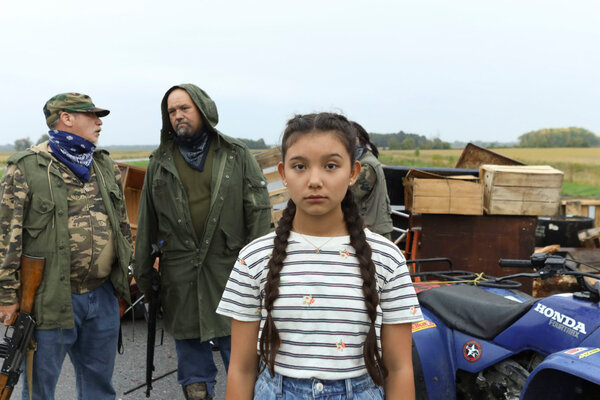 “It was a way to have great Indigenous storytelling, great female-led filmmaking and an extraordinary young lead actress — it was like, how can we not do this?” said Maria-Christina Villaseñor, the festival’s programming director. “It’s our responsibility to be mindful and not afraid.”

Villaseñor said she felt particularly obligated after a year dominated by a public-health crisis and a racial reckoning. The initial inclination was “let’s just make it as lighthearted as possible,” she said of the festival. “But I don’t think that fully does justice to kids. Kids need time to process grief and think about loss in ways that are developmentally appropriate.”

One of the most affecting evocations of a child’s experience with death is among the festival’s short films, which compete to receive prizes from an adult jury that includes the filmmakers Sofia Coppola and Peter Ramsey. Martina Lee’s “Black Boy Joy,” part of the new shorts program Celebrating Black Stories, focuses on a bereaved fictional family — a grandfather, a father and a 10-year-old autistic son — whose struggles are an affirmation of love as much as an exploration of mourning.

The 24-year-old festival, however, also offers comedy, fantasy and another new shorts program, about young people who are reinterpreting their gender identity, as well as titles for audiences as young as 3. Its opening livestreamed event, on Friday evening, is a behind-the-scenes look at the new Netflix animated television series “City of Ghosts,” in which a diverse club of enterprising elementary school students investigate Los Angeles’s supernatural side. The ghosts, all friendly, are not Casper types so much as spirits that illuminate immigrant history.

“My hope is that people who are looking for something more calming and intellectually stimulating will enjoy this show,” said Elizabeth Ito, the series’s creator, who will take part in Friday’s event. She said she was aiming for a tone like that of “old ‘Mister Rogers’” episodes.

The films, which will mostly be available to stream on demand throughout the festival, also include the cheerful New York City-centered documentary “Curtain Up!” Its directors, Hui Tong and Kelly Ng, visited Public School 124 in Chinatown to chronicle its production of “Frozen KIDS,” a half-hour adaptation of the Disney musical “Frozen,” for the 2019 Junior Theater Festival. The filmmakers and two of the students will take part in a discussion on March 13. Disney fans can also look forward to a special screening of Don Hall and Carlos López Estrada’s animated “Raya and the Last Dragon,” accompanied by a Q. and A., on March 12.

Even the festival’s more somber films have moments of joy and triumph. Kenza (Tiara Richards), the 11-year-old protagonist of Eché Janga’s “Buladó,” a feature from the Netherlands and Curaçao, may be adrift without a mother, but she is also a car mechanic, a dead aim with a slingshot and unafraid to embrace the spiritual traditions of her enslaved ancestors. She draws on an inner strength that the heroine of “Beans” discovers as well.

“Just because we’re young, it doesn’t mean that we’re powerless,” said Deer, who will discuss “Beans” online with festivalgoers on March 13. “I hope that message gets to them. And that they matter, they have a voice, and the importance of standing up for what they believe in.”

Films like these reveal a continuing theme of children connecting to their cultural roots. Sometimes that bond is mystical, as in Germán Acuña’s animated “Nahuel and the Magic Book,” a feature from Brazil and Chile, which will be screened in a special event on Saturday. At other times it involves unearthing forgotten history, as when a teenage Canadian hockey player in Sandi Rankaduwa’s short documentary “Ice Breakers” learns about the Colored Hockey League of the Maritimes.

Knowing how much young moviegoers have missed being in theaters, the festival’s organizers have tried to make the experience feel authentic. Cinephiles will still vote for their favorite titles, but with digital ballots, and while the festival participants won’t meet filmmakers face to face, they will have increased opportunities for live discussions online. (Those events will be recorded for later viewing on the festival’s Facebook page.)

“Every year we talk about the opportunity to explore the world, to explore ideas, to explore identity through the festival,” said Nina Guralnick, its executive director. Right now, she added, “that feels particularly poignant.”

No new blockbusters means Odeon could soon run out of cash