In this sleazy slasher by the writer and director John Swab, a group of sex workers adopts a former member of a religious cult. 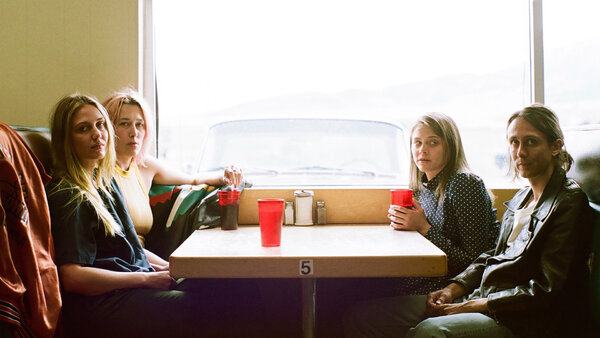 In “Candy Land,” a group of truck-stop sex workers, or “lot lizards,” assembles daily by a gas-station bench, scarfing down Twinkies and Coca-Cola between sexual romps in the back seat or the bathroom stall. It’s not glamorous, but there is a certain allure to their world and its trailer-park chic, sustained by the patchwork heart of their found family. Girlfriends Sadie (Sam Quartin) and Liv (Virginia Rand), Riley (Eden Brolin), Levi (Owen Campbell), and Nora (Guinevere Turner), their madam of sorts, all live in a motel, but together they make it feel like home.

The work is dangerous — at one point, Levi, the only male member of the crew, bludgeons a client to death in self-defense. But things soon get a little weirder: The bloodied body of a john turns up in the bathroom, his hands crossed over his chest in some kind of holy gesture; then Remy (Olivia Luccardi), a snaggletoothed virgin and a former member of a religious cult, appears at the bench, a bit too willing to be taken under the group’s wing.

It’s a textbook setup for a sleazy slasher. Written and directed by John Swab, “Candy Land” is standard grindhouse fare — more serious and less conceptually adventurous than its recent counterparts, Ti West’s “X” and “Pearl” — though not without its fair share of pleasurable nastiness. Like West’s porn-meets-evangelicalism double feature, “Candy Land” mines its thrills from the intersection of sex, repression and brainwashing.

It also pivots around the charms of its leading lady.

Luccardi, a genre regular, has the twinkling eyes of a lunatic. Last year, in the indie horror film “Soft & Quiet,” she played the new girl in a club of white supremacists who reveals herself to be the most unhinged among them; as Remy, she gradually shows her cards in a similarly disturbing manner. She’s a scream queen in the making, and “Candy Land” is her liveliest showcase yet.

Candy Land
Not rated. Running time: 1 hour 33 minutes. In theaters and available to rent or buy on Apple TV, Google Play and other streaming platforms and pay TV operators.