It’s been a hell of a few weeks at Hyde Park. The cream of music royalty hit the Great Oak stage from Bob Dylan to Barbra Streisand, Stevie Wonder to Celine Dion, plus Lionel Richie, and Florence and her Machine. Britain’s own playboy prince wrapped it up following stellar sets from support acts Texas and Keane. Black Eyed Peas warmed up the crowd with an energetic show marred by major sound issues. But all was forgotten when the main man swaggered on to reclaim his crown. As always, the big question was whether Robbie would actually sing the hard bits in Angel or hand it over to the audience. In the end, it hardly mattered after such a spectacular show.

He may be a reformed character but he is no less cheeky and the set opened with a national anthem. Lyrics like “God bless our Robbie, he can swing both ways, he is totally global except in US of A,” blissfully set the tone.

And then the superb band erupted, ten dancers in bra tops and pants strutted out and Robbie emerged in a sequin-encrusted jacket to blow 65,000 screaming fans away with Let Me Entertain You. And he did.

“Allow me to introduce myself. My name is Robbie f***ing Williams,” he roared and the crowd roared back. A catwalk brought him frequently out into the crowd and he had us in the palm of his hand.

He did the classic Freddie Mercury ‘Ay-O, with a few extra calls. “Bi-det… Small toilet” he had us calling. Few can pull it, without or without toilet humour, but it was the perfect lead into a down and dirty We Will Rock You. 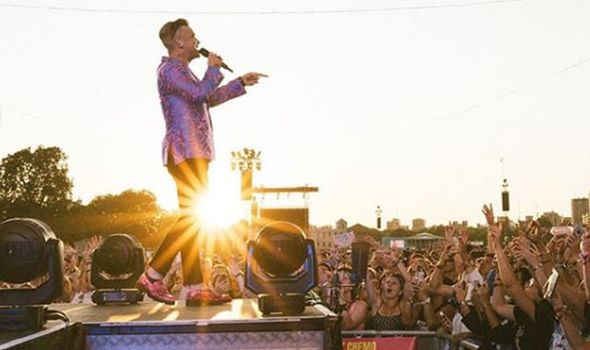 He pops off and returns in a blindingly bright pink and blue jacket and red snake print loafers. Slick.

He looks like the same old Robbie but apparently he’s the new ambassador for Weight Watchers, telling us: “It used to be cocaine and hookers, now it’s hummus. My life is so much better or so my wife tells me.”

Healthy or not, it’s time for more fun on a bouncy Candy, then a crowd singalong karoake of 80s and 90’s pop. It showcases his extraordinary affability and connection with his fans.
He asks: “England am I still your son?” The crowd roars yet again. He picks an Italian fan in the front row to sing back Come Undone lyrics acapella before launching ito a stirring full version.

An XFactor interlude brings out all his group contestants plus a few other familiar faces for Take That’s Never Forget.

Another thing he never forgot, he tells us, was seeing his dad warm up crowds with jokes and songs. In an incredibly moving moment, he brings out Peter Williams for a wonderful duet on Neil Diamond’s Sweet Caroline. Pure class and the crowd laps it up.

Anecdotes about his three kids are fittingly followed by a heartfelt I Love My Life. 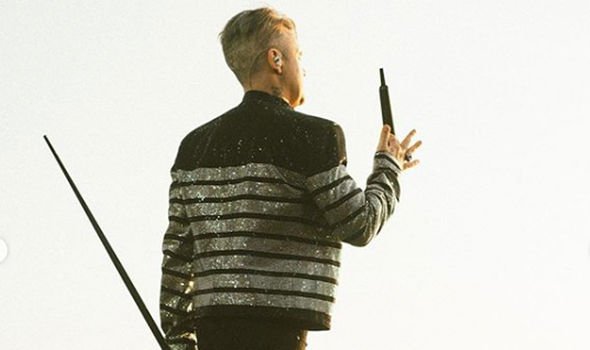 In another extraordinary crowd-pleasing moment he brings a lady up on stage from the crowd. Leslie from Scotland is sprayed across screens giggling and beaming with joy as he serenades her with Something Stupid. It’s goofy and gorgeous.

Then it’s back to another classic with Millennium before he recalls his anger after leaving Take That to deliver a raw No Regrets.

With huge eye-popping video backdrops, sensational backing dancers and his own arsenal of massive anthems, Robbie turned Hyde Park into a real stadium spectacular. Already an instinctive showman his residency in Las Vegas has added another slick and shiny dimension.

But there is also real substance behind the style. There are no screens or dancers for a powerful Real Love. It needs no tricks. Especially with 65,000 on backing vocals. 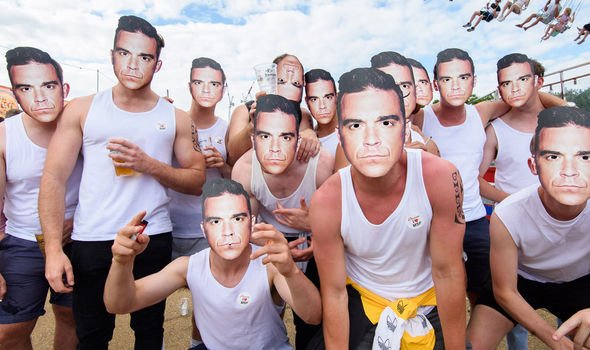 Energy levels rise as he shouts out: “Ladies and gentleman I’ll be Robbie Williams if you’re Kylie Minogue” before a bombastic Doing It For The Kicks and then Hyde Park becomes a huge (roller) disco for a riotous Rock DJ.

Up for “equal opportunities” he changes the start of She’s The One for a man in the audience in a ‘gay best friend’ t-shirt. The crowd sings and sways along in joyous agreement.

It’s almost over as he teases: “I wouldn’t go without doing the hit.” Those blissful opening chords ring out and we’re all angels. Sure, he lets us do the heavy lifting on the big bits but not due to any vocal limitations. He has never sounded better, rich and full-bodied. He understands the ecstatic joy the crowd has belting back that euphoric chorus and lets us have our moment.

The encore is a glorious collective catharsis on My Way, the lyrics scrolling down the screen. He’s had a few regrets and travelled each and every highway, but he’s always taken us along for the ride. He faced it all and he’s standing taller than ever – and last night was a fitting celebration of an extraordinary career and a man finally finding some peace and enjoying his rewards.

“I’ve got a smile in my heart and a bigger one of my face,” he told us and every single person felt exactly the same way. The loud speakers playing the crowd out of the park blasted out Dirty Dancing’s Time Of My Life. A risky choice in advance, but every word had proved true.

New Live-Action 'Inspector Gadget' Movie In the Works At Disney