Filmed in South Korea, the new movie from Hirokazu Kore-Eda turns a potentially grim tale into a poignant road picture. 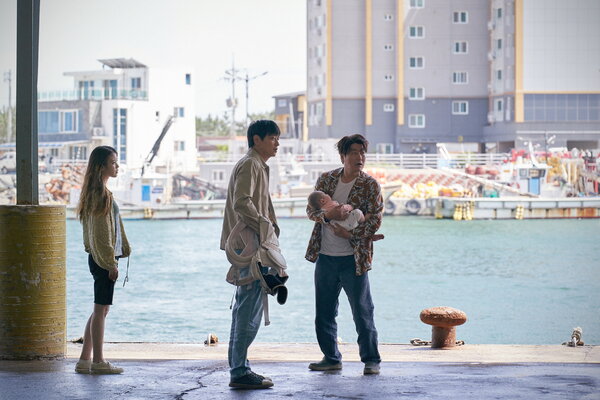 On a rainy night in the South Korean city of Busan, a young woman leaves her infant son outside a church, near — but not inside — the “baby box” that is there to collect abandoned children. Two police officers have staked out the church, and one of them places the child in the box, where he is found by traffickers who plan to sell him on the illegal adoption market.

This sad, ugly situation, soaked in greed and desperation, is the premise of “Broker,” a sweet and charming film by the Japanese director Hirokazu Kore-Eda. Kore-Eda, who won the top prize at Cannes in 2018 for “Shoplifters,” brings a gentle humanity and a warm playfulness to stories that might otherwise be unbearably grim. His characters, who often live at the margins of modern society, find tenderness and camaraderie in harsh circumstances. Without undue optimism or overt sentimentality, he discovers a measure of hope amid the cruelty and misfortune.

The baby, whose name is Woo-sung, lands in the temporary custody of Sang-hyeon (Song Kang Ho) and Dong-soo (Gang Dong-won). They aren’t really bad guys, let alone criminal masterminds. Dong-soo, who grew up in an orphanage, works part-time in the church. Sang-hyeon, who has spent time in jail and owes money to loan sharks, operates a struggling laundry business. When Woo-sung’s mother, So-young (Lee Ji-eun), tracks them down with second thoughts, they insist on their good intentions. “Think of us as Cupids” uniting children with loving parents, Sang-hyeon says, or maybe “twin storks” delivering longed-for bundles of joy. For a fee, of course, but they’re willing to cut So-young in on the action.

“Broker,” Kore-Eda’s first film shot outside of Japan, is partly a road movie, winding its way through the cities and towns of South Korea as the baby-sellers and their new partner look for suitable parents for Woo-sung. They are pursued by those police officers — played with salty deadpan by Bae Doona and Lee Joo-young — who are like the stars of their own buddy-cop picture, easing the tedium of long hours in their unmarked car with weary banter and nonstop snacking.

Along the way — as if to add a layer of sitcom to the genre sandwich — the brokers take in Hae-jin (Im Seung-soo), a soccer-mad 8-year-old boy from Dong-soo’s orphanage who stows away in their battered minivan. There’s also a murder, and an underworld conspiracy gathering in its wake. At times it seems as if a whole season of K-drama might be coiled into a little more than two hours.

But somehow, “Broker” doesn’t feel overplotted, overly cute or excessively melodramatic. Kore-Eda has an emotionally direct style, a way of fusing naturalism and fable that recalls the neorealist magic of Vittorio De Sica. His characters are silly, suffering, dignified creatures, on whom the audience’s sympathy descends like grace.

It helps that the superb cast is anchored by Song, the stalwart Everyman perhaps best known as a fixture of the Bong Joon Ho cinematic universe. His character is both the comic spark in “Broker” — sporting a haphazardly adjusted baby carrier on his chest and launching into occasional jeremiads about the sorry state of the laundry industry — and the source of its dramatic credibility. Part scapegoat, part hero, he is at the center of the story even as he is also the loneliest person in it.

And it’s the specter of loneliness, as much as anything, that haunts this movie. Woo-sung, cherubically untroubled, is a symbol of the love, connection and fulfillment that money can’t buy and that is therefore commodified by a society determined to make money the measure of everything. Kore-Eda, remarkably, doesn’t counterfeit a happy ending, but he also refuses despair. He’s an honest broker of heartbreak.