In the time-honoured B-movie tradition, the humans make a string of astonishingly stupid decisions as they are stalked by a disgruntled and decidedly shonky CGI lion. 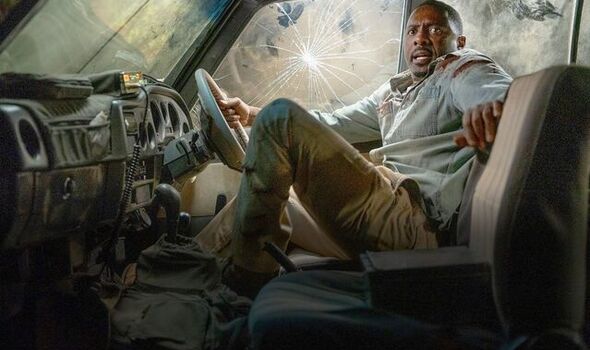 I do not want to spoil the fun, but if this lot were in a Jaws movie they would be surfing in meat-flavoured swimsuits.

The film’s big hook is in the trailer where a flash edit reveals actor, director, DJ, rapper and SKY TV salesman Idris Elba going mano-to-claw with the king of the jungle.

If that did not whet your appetite for big screen cheese, you are probably reading the wrong film column.

Here the artist sometimes known as DJ Big Driis is Dr Nate Samuels, an American surgeon who takes his two teenage daughters Meredith and Norah (Iyana Halley and Leah Sava Jeffries), to South Africa to visit the place where their recently deceased mother grew up.

Nate was not around when she died from cancer, but hopes to heal wounds with a safari holiday in the nature reserve run by his old friend Martin (the always watchable Sharlto Copley).

After efficiently working his way through the sad backstories, Icelandic director Baltasar Kormakur busies himself with crafting a hairy homage to (or rip-off of) Jurassic Park.

An opening scene gave a glimpse of the Beast in the title – a revenge-seeking lion who went nuts witnessing his entire pride stalked lion being gunned down by poachers.

After mauling his way through an entire village, the furious feline decides to vent his anger on the dim-witted Samuels.

Thankfully, this one of those rare B-movies that are much more fun than their trailers. The Idris vs Lion rumble is dafter than I dared to imagine.

Beast is in cinemas now (certificate 15).