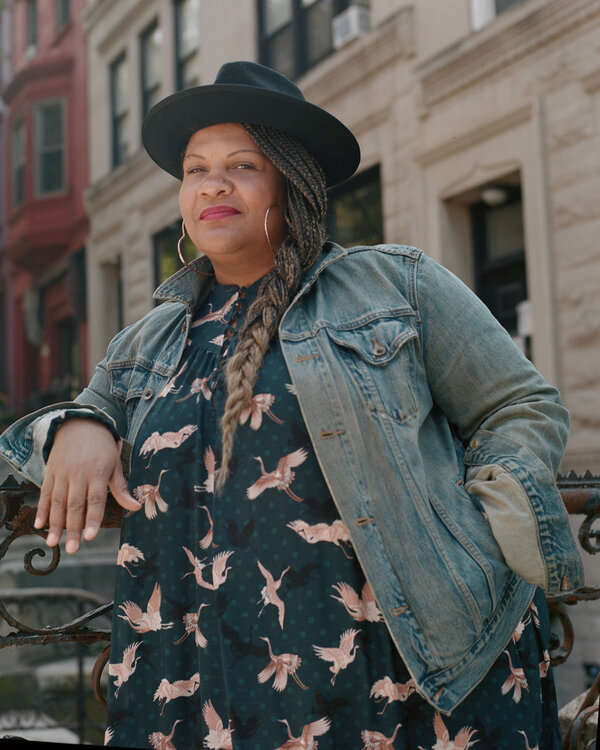 On a recent September morning, Radha Blank sat on a paint-blistered bench just above Riverbank State Park, soaking up the late-summer sun. Trucks thundered by on the highway below. Wasps circled a garbage can. Blank’s surgical mask tangled with her hoop earrings, but nothing could kill her mood.

She cooed at a small dog in a zebra-striped jacket. The dog paused and released a stream of urine. “He just blessed us,” she said.

Blank had last visited this Hamilton Heights block about a year ago, on the first day of filming for the “The Forty-Year-Old Version,” which premieres on Netflix on Oct. 9. Blank wrote the movie. She also directed it. She stars, too, playing a character named Radha, a struggling New York playwright who passed her next-big-thing sell-by-date a decade ago.

But the movie argues that self-discovery doesn’t have an age limit. After a meeting with a producer goes violently wrong — he asks her to write the book for a Harriet Tubman musical; she chokes him — Radha spends the night crying into a carton of takeout ribs and the morning dreaming up a new career.

“Think of me doing hip-hop,” she tells her agent, Archie (Peter Y. Kim), in the Riverbank scene.

Coming back to this spot a year later felt therapeutic, she said, “because I was so nervous then. And everyone’s butt was clenched. Everyone was just like, ‘Is this going to work?’”

“The Forty-Year-Old Version,” shot on 35-millimeter black-and-white film, won the directing competition at the 2020 Sundance Film Festival and immediately scored a Netflix deal. It worked. For Blank, in her patterned dress, bright sneakers and squashed fedora, clenching seemed a thing of the past.

The outline of “The Forty-Year-Old Version” resembles plenty of other comedies. A big-city screw-up unscrewing? Been there. Seen that. (The title, a search engine optimization nightmare, plays on Judd Apatow’s “The Forty-Year-Old Virgin.”) But the heroes of movies like these don’t usually look like Blank — female, Black, not an ingénue, not a sample size. “The thing that makes it maybe groundbreaking is that someone who looks like me is at the center and behind the camera,” Blank said.

The film, Blank’s first, isn’t pure autobiography. She has yet to choke a producer. But the apartment in the movie is her apartment. Her actual brother plays her brother. The pain of continuing to believe in yourself as an artist when the art world thinks otherwise and candles on the birthday cakes won’t stop coming? That’s all her.

“I guess I am kind of putting myself out there,” she said.

Blank, who gives her age as “in my 40s,” had been putting herself out there for a while. She grew up in the Williamsburg neighborhood of Brooklyn, performing for family and friends, then discovered theater at City College, mostly by accident. During her postgrad years, she acted, did stand-up and wrote plays without receiving much in the way of external validation. In 2008, she was accepted into the Public Theater’s Emerging Writers Group, a prestigious program for early-career playwrights. Theater stars like Branden Jacobs-Jenkins and Dominique Morisseau would join subsequent classes.

By the time the program ended, Blank had 12 plays written. No major company would produce them. She took meeting after unsuccessful meeting, crying her eyes out in theater lobbies afterward.

“I don’t think theater embraced her,” said Keith Josef Adkins, the artistic director of the New Black Fest and an early champion of Blank’s work.

Her one produced work, “Seed,” staged at the National Black Theater in 2011, earned a mixed review from The New York Times. Blank can still quote it. “It called my play ‘low-budget,’” she said.

A year or two later, after being fired from a screenwriting job, she put her frustrations on paper, writing a 10-episode, lightly fictionalized web series about reinventing herself as a rapper, RadhaMUS Prime. Then, two weeks before shooting began, Blank’s mother died. Blank scrapped the series.

“She was my best friend,” Blank said. “She was my first audience member and my biggest champion. I really just couldn’t imagine creating art without her in the audience.”

Blank didn’t abandon the project entirely. She performed RadhaMUS hip-hop songs around town. And after moving to Los Angeles to join the writers’ room of Baz Luhrmann’s “The Get Down,” she reinvented her series, first as a pilot, then as a screenplay.

Michelle Satter, the director of the Sundance Institute’s feature film program, solicited a draft and invited Blank to join the institute’s prestigious screenwriting lab. (Blank would also do stints in the directing and creative producing labs.) Satter remembers listening to the first live reading of Blank’s script. “It was absolutely electric,” she said. “We knew we were in the company of a filmmaker who is going to have a big career. At age 40.”

Producers weren’t sure. Some tried to dissuade her from black-and-white film, which Blank saw as a homage to the movies she grew up loving. (She namechecked Cassavetes and, sheepishly, a director she would only refer to as “Schmoody Schmallen.”) Others encouraged her to cast star actors. Blank refused. She hadn’t compromised herself during her years in theater. She wouldn’t compromise now.

She didn’t have to. At the Sundance Festival in 2019, she met up with the writer, actor and producer Lena Waithe (“The Chi”), a longtime friend. As they sat together after a screening, Waithe said to her, “Girl, where’s your movie at? That’s what I want to see.” With Blank’s consent, Waithe quickly found financing and the movie went into production last summer. Blank shot it in 21 days.

Kim, who plays Radha’s best friend and agent, remembered watching her on set. “She was never sitting still,” he said in a telephone interview. “She was running around like a Tasmanian devil. But whenever she was ready to shoot, she was ready.”

Seen one way, Blank has been ready for years. Her talent, her candor, her comedy — none of that is new. But to look back through the viewfinder is to realize that it took all those years of experience — the acting, the writing, the rapping, the teaching, the career letdowns, the loss of her mother — to make “The Forty-Year-Old Version” this distinct and vulnerable. “I really literally have put everything in there,” she said.

Which means that she has made sacrifices. “Whether it’s relationships or being a mother, this thing has kind of had a hold on me for most of my life. And I’ve treated it like a life partner, making it my priority,” she said.

She has other choices now. She wrote “The Forty-Year-Old Version” to assuage her loneliness, her feelings of rejection and loss. It worked. Another film is in the works, a family story that feels less personal. Theaters now seem interested in her plays. And she wants to find time, she said, “to sit on a porch and sip tea and watch people and be in quiet.”