Paid podcasts have been a hot topic this year within the creator industry.

Podcasting giants like Spotify and Apple have begun to explore subscriptions, letting creators earn money from their fans by paywalling select content. But many creators have already built subscription businesses around podcasting using Patreon, which was an early mover in the online membership space.

For Patrick Hinds and Gillian Pensavalle, who cohost the true crime and comedy podcast “True Crime Obsessed,” Patreon revenue gave them the stability to turn podcasting into a full-time career.

“We were spending a full work week making this podcast for free and we knew that wasn’t sustainable,” Hinds told Insider. “Either we had to find a way to at least cover our costs and maybe make a little profit, or the dream was to find a way to make a living doing it.”

Hinds and Pensavalle launched the podcast in 2017. Now, four years later, their Patreon has over 44,000 paying members, and is one of the top 10 earners on the platform, the company said.

“Podcasting is just exploding right now and we are seeing that on our platform,” Julian Gutman, ‎Patreon’s chief product officer, told Insider. “We think there are a lot of future things that the creator is going to need and want to maximize their creativity and maximize their business, and that is what we are focused on.”

The growth of subscription podcasts, and of direct fan revenue in general, has propelled Patreon to a recent valuation of $4 billion. Patreon has more than 200,000 creators and more than 7 million paying members, the company said.

Patreon’s growth is part of trend among digital creators toward direct revenue sources. As the creator industry has matured, many have looked beyond ads to platforms ranging from the celeb shout-out app Cameo to OnlyFans, a subscription service popular among creators of explicit content.

One big draw of membership platforms like Patreon has been revenue stability and decreased reliance on the whims of advertisers, creators told Insider.

“I coined the phrase ‘Patreon is freedom,’ because within four months of us launching our Patreon, both of us had quit our jobs,” Hinds said. “Gillian has a family. I have a family. It’s not a thing we did lightly. But we knew it was sustainable.”

On Patreon, memberships are tiered, and creators have the ability to build a system and price points that they think will work for their audience. Patreon receives a percentage of the income creators earn through the membership, between 5% and 12% cut of the monthly income earned, plus a payment processing fee. Some Patreon creators also have a partner manager who assists with their pages and the back end of the platform.

Gutman said Patreon is currently focused on revamping its mobile app, on branching out into other communities (like its Discord integration), and growing commerce options by offering services like in-house merchandise development.

Hinds and Pensavalle broke down how they got started on Patreon and how they earn a living through subscription-based income. 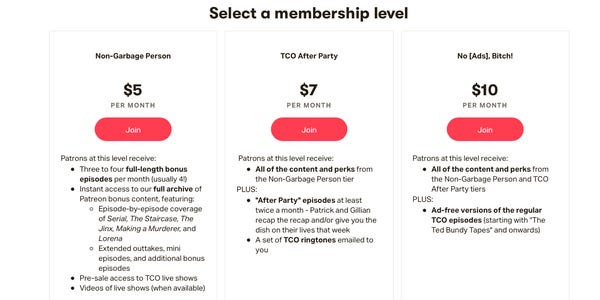 How they built a tiered reward system

Hinds and Pensavalle said exclusive content was a key for them to effectively bring a community from free podcasting apps over to Patreon.

When they first started, their Patreon was $5 per month and members received about four extra ad-free bonus episodes a month, Pensavalle said.

That business model has since expanded. Now, they offer a variety of other exclusive ad-free content on Patreon, including videos, chats, and livestreams for paying members.

“We just kept listening to what the listeners wanted, and we gave it to them,” Pensavalle said, adding that they get ideas for what content to provide on Patreon by reading through comments and direct messages from fans on Instagram.

Here’s a breakdown of their Patreon tiers. Every time a subscriber goes up a tier, they are offered the rewards in the tiers below:

Tier 2: “TCO After Party.” This tier costs $7 a month and includes two episodes a month where they recap their lives that week, and a set of ringtones.

Tier 3: “No [Ads], Bitch!” This tier costs $10 a month and includes ad-free versions of the regular episodes.

Tier 3: “Hero Bell!” This tier costs $20 a month and includes admission to VIP meet-and-greets at live shows, additional audio and video content, and every once in a while they will send something out in the mail to those Patrons.

‘Don’t think of Patreon as a tip bucket’

Hinds and Pensavalle promote the Patreon membership within their ad-supported episodes, which are available for free on Spotify and Apple Podcasts.

“There are some tricks of the trade we’ve learned to drive people to Patreon, like when we have a really popular series that’s six episodes on Patreon, we’ll put episode one in the regular [ad-supported] feed so that everyone can hear it,” Hinds said. “Or we’ll cover two episodes on the free feed, and two on Patreon ad-free.”

“Don’t think of Patreon as a tip bucket,” Hinds said. Hinds and Pensavalle dedicate entire work days just to Patreon and spend equal time working on it as they do the free podcast, they said. They have also worked to expand the benefits they offer to members.

They said they try to put the same energy and work into the Patreon episodes as they do into the ad-supported episodes.

“People are considering that $5 as a way to keep themselves happy and connected,” Pensavalle said. “And we take it very seriously. We know that people have budgets, now more than ever.”

With the success of True Crime Obsessed on Patreon, Hinds founded the podcast network Obsessed Network, which offers other crime-related shows like Disappeared, Abducted in Plain Sight, and Unjust and Unsolved.

“It really has enabled us to try new things and bring more people into the fold,” Hinds said of Patreon. “Years into it we’ve been able to hire project managers, and editors, and mixers … The money is spent on making more podcasts and bringing more people in.”

In the early days of Shoppingtown, hanging out felt like teen spirit

The Quarantine Stream: 'Raising Arizona' is a Delightfully Weird Metaphor for Parenting