The consistent killings of Black people at the hands of police, like the cases of George Floyd, Breonna Taylor, Elijah McClain, Tony McDade, and more, as well as Ahmaud Arbery, who was killed in a confrontation with two white men, have sparked nationwide protests against police brutality and systemic racism since late May. However, the protests have varied in terms of how they’ve been received by authorities and law enforcement — while most have been peaceful, some protests have seen violence or other disruption. If you’re planning on joining a protest to show your support, you might be wondering what your rights are while protesting. Here are the big things you need to know before you go, and what you should keep in mind if things go wrong.

The right to protest is protected under the First Amendment to the U.S. Constitution. It says: "Congress shall make no law respecting an establishment of religion, or prohibiting the free exercise thereof; or abridging the freedom of speech, or of the press; or the right of the people peaceably to assemble, and to petition the Government for a redress of grievances." According to the American Civil Liberties Union (ACLU) — an organization that fights to protect individuals’ civil rights, including the right to protest — while the Constitution protects your right to speak out against injustices, there remains a gray area as to when and how the police can involve themselves. The main official and legal purpose for police presence at a protest is to monitor the situation and de-escalate threats of violence, but officers at protests have frequently been seen escalating issues of violence, too. Before you protest, make sure you know what your rights are so you’re well-equipped to fight back against police brutality and racial inequality while protecting yourself, too.

The Right To Assemble

“The First Amendment protects the freedom of assembly and the freedom of speech,” Emerson Sykes, a staff attorney with the ACLU Speech, Privacy, and Technology Project, tells Elite Daily. “Most of our right to protest comes from there.” You won’t usually need to file for a permit to protest, but there are exceptions, such as gatherings that block traffic or streets or a protest held at a private park or plaza.

You have the right to protest on most public property, but when protests begin to block entrances to government buildings or interfere with other uses of public property (like blocking a highway entrance), law enforcement has the right to intervene. Officers may then legally break up a protest, which would begin with an order to disperse. However, an order to disperse should be a “last resort” to protect protesters, says Sykes, and officers can’t just order you to leave because you don’t have a permit or because they don’t like what you’re protesting against. “[A dispersal order is for] where there’s an imminent threat to public health or public safety. The fact that you don’t have a permit is not enough reason to shut down a protest, even if some individuals are breaking the law.”

A dispersal order should come only after law enforcement has given warnings and tried to de-escalate the situation, but if people don’t leave, police may use “reasonable force.” ACLU’s Northern California chapter says the police have leeway in deeming what is reasonable force on a case-by-case basis, but it must be proportional to the threat. Law enforcement must also give you both a path to leave and enough time to do so. “You can’t have 15,000 people bottlenecked in a square and say, [they] have three minutes to leave,” says Sykes. And as many areas have used curfews in the past, remember that protesters are also legally obligated to follow curfew rules, and your protest will have to end at that time or you risk arrest. Additionally, if you’re asked to disperse, and do not, this may also result in prosecution and arrest. “The First Amendment does protect your rights to take pictures and video in public, including of officers doing their jobs,” says Sykes. If you’re on public property, you have the legal right to take photos or other recordings of what’s going on around you. While the police can order you to move away if your actions are interfering with any police work, recording video at a safe distance isn’t one of these interferences. If an officer instructs you to move, do so, but you don’t have to stop recording. If an officer threatens to arrest you for recording, the ACLU notes that "in most circumstances" it’s better to put the camera away and contact them for help.

While your right to protest comes from the First Amendment, Sykes points out you also have rights under the Fourth Amendment, which protects you from unreasonable search and seizure. If a law enforcement officer stops you, they aren’t allowed to open your passcode-protected phone without a warrant. A passcode is also safer than methods like a fingerprint lock or a face recognition lock, which cops may be able to use without your consent to open your phone if you’re in custody. (This is why Sykes recommends putting a code lock on your phone before heading to a protest.) Police also aren’t allowed to delete anything from your phone if they’re able to access it, and that includes photos or videos.

If you are detained by police for any reason, be sure you know your rights. If you don’t want to answer questions or be involved in police activity, ask the officer directly, “am I free to leave?” If you are, do so. If you’re being detained — which is different than being arrested — remember you have the right to remain silent, and you probably shouldn’t volunteer information to the cops anyway. “In some places [police] are allowed to ask your name. But nothing more than that,” says Sykes. “They’re not allowed to ask where you’re from. They’re not allowed to ask your citizenship, [or] why you’re there. Any of those types of questions.”

You may be arrested if you’re participating in civil disobedience, such as a sit-in demonstration or blocking a private business or government office. If you are, remain calm. Don’t talk, sign anything, or agree to anything before you’ve talked with a lawyer. If you don’t have a lawyer ready to go, the court must provide you with one at your request. Sykes also notes police are legally not allowed to listen in to any conversation you have with a lawyer, but that doesn’t apply to other conversations — like if you call your parents first. “That’s not the [time] to explain all the details of what happened, who was there and everything like that, because the police are likely to be listening. So if you get arrested, use your phone call either [to contact] a loved one or for a lawyer. But otherwise don’t say anything,” he advises. “The police may try to convince you that you don’t need [a lawyer], but if you say ‘am I free to go’ and they say, ‘no,’ then you need to ask for an attorney.”

If you’re held for charges against you, you can contact a bail bonds group if you need help making your cash bail. Bail amount varies, and if you seek assistance to get out before trial, there are several groups across the United States working to free protesters who’re being held on bail. Try to find a local service concentrating on protester freedom, a one like The Bail Project, which is working in several U.S. cities. If you think it’s likely you’ll be arrested, Sykes advises writing the phone number of a legal aid hotline or lawyer’s guild on your arm, in case you don’t have access to your cell phone.

If you think your rights have been violated, Sykes recommends doing your best to record video, if you can do so safely, and taking down as many of the important details as possible. “Details about the location, the time, the number of officers, their badge numbers if you can, vehicle numbers. Basically, as many details as possible, to try to ensure that there is accountability at some point.”

While the coronavirus pandemic continues, you may worry about safety if you decide to join in a protest. While it may be difficult to practice social distancing in a large gathering, you should still wear a face covering over your mouth and nose, use hand sanitizer, and avoid touching your face. As of April 24, the Centers for Disease Control and Prevention (CDC) recommends washing your hands or using sanitizer often, as well as wearing a face covering in public and areas where social distancing is not possible.

If you think you’re showing symptoms of coronavirus, which include fever, shortness of breath, and cough, call your doctor before going to get tested. If you’re anxious about the virus’s spread in your community, visit the CDC for up-to-date information and resources, or seek out mental health support. You can find all Elite Daily’s coverage of coronavirus here. 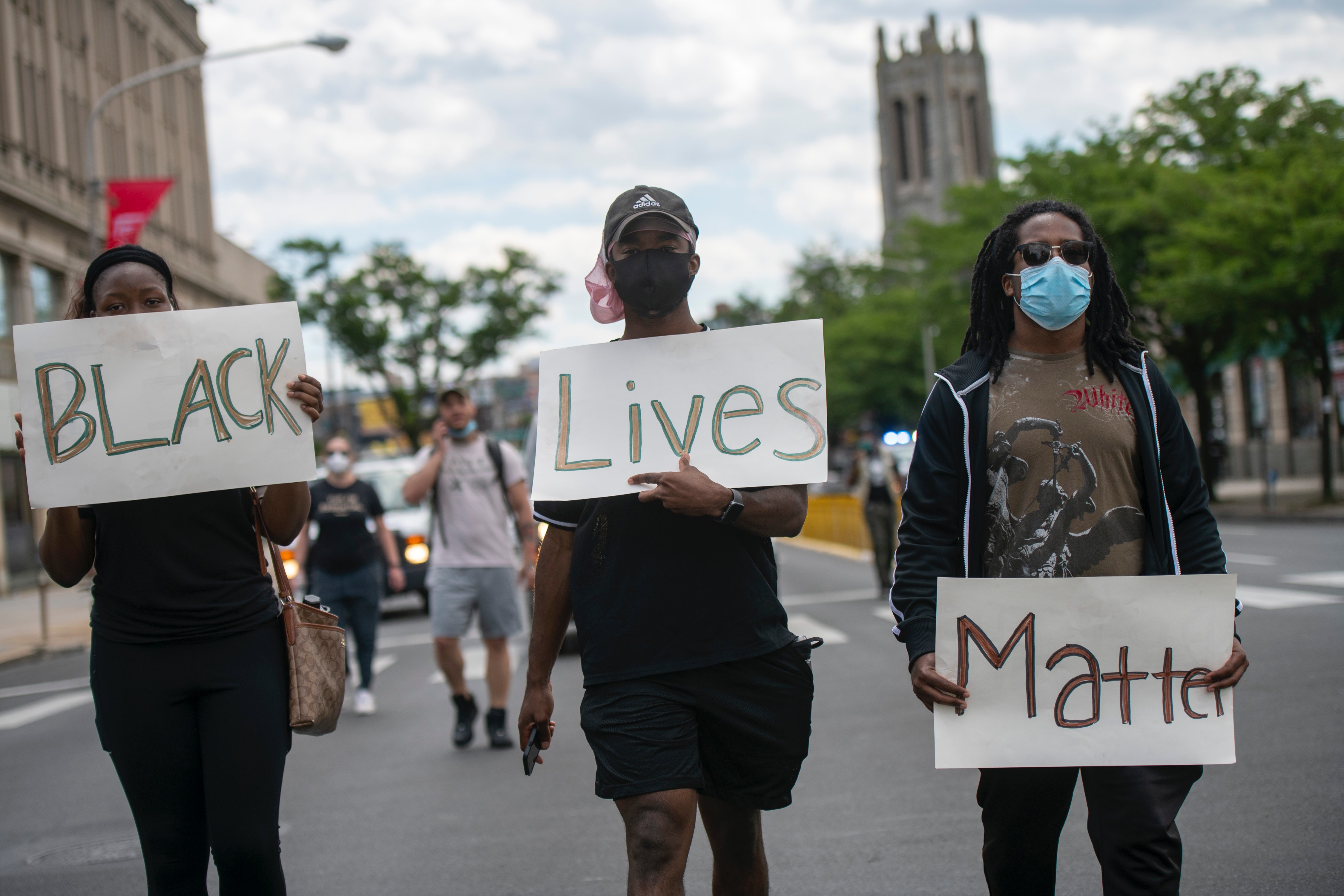 The Meaning Of Juneteenth Is A Celebration Of Independence