The Queen‘s mourning family will come together again on Saturday evening in a poignant tribute to the late monarch.

Her eight grandchildren will all stand vigil beside her coffin in Westminster Hall for 15 minutes ahead of her funeral on 19 September.

Prince William will take up position at the Head, with his brother Prince Harry at the Foot. At King Charles III‘s request, they will both be wearing their military uniform.

MORE: King Charles III: Inside his last night as a Prince – including hosting party – before death of his mother 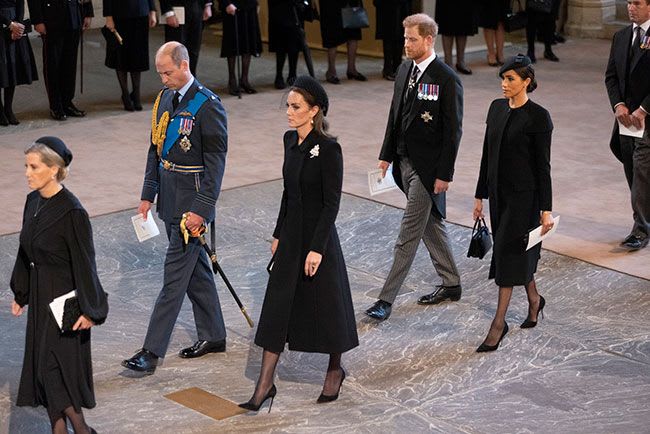 Princess Kate and Duchess Meghan will not attend Saturday’s vigil

The vigil will take place 24 hours after their parents did the same – with the younger generation also keen to pay their respects to their beloved grandmother.

Royal watchers might be surprised to note the absence of their spouses, however. Notably, Princess Kate, Duchess Meghan, Mike Tindall, Edoardo Mapelli Mozzi, and Jack Brooksbank, will not take part in the vigil.

MORE: Why royal ladies will wear hats to attend the Queen’s funeral

A decision has been made to have the grandchildren come together without their wives and husbands, and, as such, both Kate and Meghan will remain at their respective homes in Windsor.

Kate stands before the Queen’s coffin in Westminster Hall

They will, however, all be present at the Queen’s funeral on Monday. At 10:44 am, the coffin will be transported to Westminster Abbey, carried on the State Gun Carriage of the Royal Navy, just as her father King George VI was.

In the procession behind the coffin will be King Charles, alongside other members of the royal family and the royal household.

They will arrive at Westminster Abbey at 10:52 am, when a bearer party will carry the coffin inside for the funeral.

At approximately 11:55 am, the service will come to an end, and The Last Post will sound, followed by a two-minutes silence. The national anthem will then draw the state funeral to a close at 12:00 pm.

Make sure you never miss a ROYAL story! Sign up to our newsletter to get all of our celebrity and royal news delivered directly to your inbox.

'RHOC' alum Vicki Gunvalson accuses ex-fiancé of cheating: 'No Christian man would do what he's done'

Linda Lusardi reveals husband’s words at her coronavirus bedside: ‘You’re not giving up’