Tributes to famed actor Sidney Poitier have begun pouring in on social media from celebrities like Whoopi Goldberg, Joseph Gordon-Levitt, and more.

The world is mourning the loss of Sidney Poitier, the famous Oscar-winning actor who died at the age of 94 on Friday January 7.  After news of Sidney’s death spread, Whoopi Goldberg, Jeffrey Wright, and more stars honored the iconic actor with beautiful tributes shared to social media. Many of the tributes featured photos of Sidney, as well as kind words about how he broke barriers for the African American community in Hollywood.

“If you wanted the sky i would write across the sky in letters that would soar a thousand feet high.. To Sir… with Love Sir,” Whoopi wrote on Twitter, referencing Lulu’s song from the 1967 British drama, To Sir, With Love, that starred Sidney. “Sidney Poitier R.I.P. He showed us how to reach for the stars,” The View co-host added.

Jeffrey, 56, shared a photo of Sidney and a heartfelt message. “Sidney Poitier. What a landmark actor. One of a kind. What a beautiful, gracious, warm, genuinely regal man. RIP, Sir. With love,” he wrote on Twitter. Joseph Gordon-Levitt, meanwhile, called Sidney “an absolute legend” and “one of the greats” in his Twitter tribute. Joseph’s post included a few photos of Sidney, including when he was honored by President Barack Obama with the Presidential Medal of Freedom in 2009.

Garcelle Beauvais shared a selfie of her and Sidney to Instagram. She wrote, “Mr Poitier thank you for your Legacy!! You showed us what it means to be great! Rest in Power 🙏🏽🖤.” Viola Davis shared a pic of her and Sidney together as well. In her caption, Viola wrote, “This is a big one. No words can describe how your work radically shifted my life. The dignity, normalcy, strength, excellence and sheer electricity you brought to your roles showed us that we, as Black folks, mattered!!! It was an honor for my husband and I to share lunch with you at Spagos. You told us,“If your dreams do not scare you, they’re not big enough”! I put this quote on my daughter’s wall. Rest well Mr. Poitier. Thank you! Thank you for leaving a legacy. May flights of angels sing thee to thy rest.” 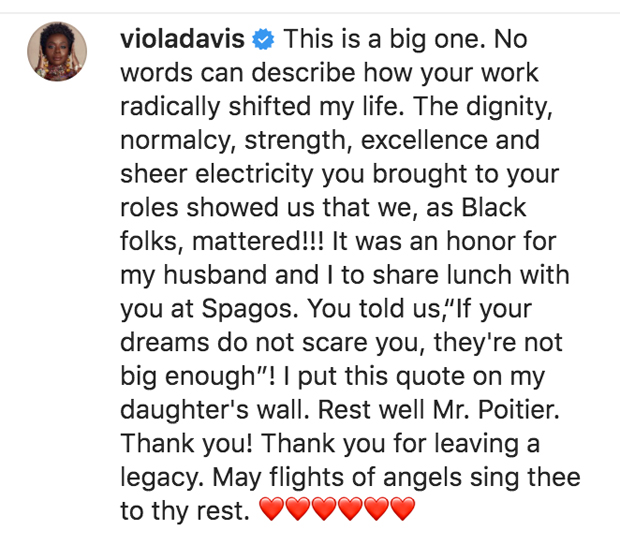 Sidney was the first Bahamian and African American to win an Academy Award in 1964 for Lilies of the Field. Before his acting career, he had brief stint in the Army. He then found the American Negro Theater in New York City. He worked as a janitor in exchange for acting classes. Sidney landed his first official stage role in Lysistrata, which he followed up with Anna Lucasta. Sidney finally made his on-screen debut in 1950 in No Way Out.

Sidney continued making movies until 2001. His final acting appearance was in the TV movie The Last Brickmaker in America. He received the Presidential Medal of Freedom from Obama in 2009 and received a knighthood from Queen Elizabeth II of the United Kingdom in 1974. He also served as the Bahamas ambassador to the United Nations Educational, Scientific, and Cultural Organization.

Mel B: ‘I try not to get too stressed’ Singer reveals diagnosis after blindness scare