Since officially leaving royal life and moving to the United States, Meghan Markle and Prince Harry have been upfront and candid about their distaste for certain aspects of Buckingham Palace. So much so, in fact, that the palace has done away with its aloof “never complain, never explain” policy and will now be entering the PR game to correct any “mistruths” coming from Meghan and Harry, according to the Daily Mail.

The Duke and Duchess of Sussex have also assembled their own PR team to combat what they feel is unfair media coverage, as Megan lamented in her interview with Oprah Winfrey. According to the Daily Mail, this team is known as the “L.A. Spin Machine,” and their goal is “ensuring that the Sussex point of view is ever-present in British and U.S. media.” The tabloid also claims this is “largely female, stiletto-heeled, sleek-haired, and drawn from the highest echelons of film, showbiz, politics, sport, and law…”

So, who are the people behind the Sussexes’ brand? Let’s take a look.

Meghan and Harry have a large PR team 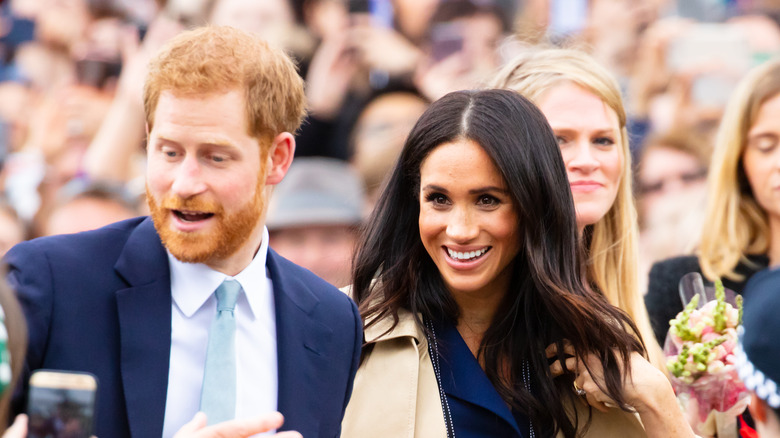 Understandably, Prince Harry and Meghan Markle have a significant team behind them. The couple’s global press secretary, Toya Holness, issues statements on their behalf. Most recently, she issued one confirming that the Sussexes had spoken with the queen about naming their newborn daughter “Lilibet,” Queen Elizabeth’s childhood nickname. Per the Daily Mail, Holness is one of the few people who speaks to Meghan and Harry every day. She started working for them in October and assumed her current position in March.

Christine Schirmer serves as the couple’s head of communications, whose goal is to ensure “diverse and open access to their work,” per the Daily Mail. Meanwhile, Cambridge alum Jenny Afia serves as the couple’s lawyer. Afia works with celebrity clients on cases regarding privacy, particularly ones involving paparazzi. James Holt, who previously advised former Deputy Prime Minister Nick Clegg, serves as the executive director of the Archewell Foundation, the Sussexes’ philanthropic organization. He is one of the longest-serving members of the team, having worked for the couple for five years. Also at Archewell is Ben Browning, who is in charge of the foundation’s video and podcasting.

Meghan’s longtime friend Keleigh Thomas Morgan is another PR adviser who also has worked for Tyler Perry. Meghan’s former agent Nick Collins serves as a consultant, while the couple’s former chief of staff Catherine St-Laurent still works for them as a senior adviser. It takes a lot to keep the Sussexes’ lives running smoothly!

David Eason: Jenelle Doesn’t Take Care of Her Kids and Also She STOLE from Me!