Sarah Ferguson married Prince Andrew back in 1986. They had two children together — Princess Beatrice and Princess Eugenie — before they split a decade later. According to Hello! magazine, Sarah and Andrew have continued living together at the Royal Lodge in Windsor long after their divorce, which has sparked rumors that they were trying to work things out and would eventually get back together. While a rekindling hasn’t exactly happened, Sarah opened up to The Telegraph in July to explain her take on her relationship with Andrew. “We are co-parents who support each other and believe that family is everything. I’m proud of the job we have done together in bringing up our children and sustaining a strong family unit. Our bywords are communication, compromise and compassion,” she told the outlet.

In August, Andrew was hit with a sexual assault lawsuit, according to The New York Times. The damaging allegations have rocked the royal family, bringing about a scandal that has left many unanswered questions. The Sun reports that Andrew “vehemently denies” having any relations with Virginia Giuffre, a “former Jeffrey Epstein sex slave,” who claims that she was raped by the Duke of York. As this unfolded, Andrew fled to Balmoral — with Sarah by his side, according to The Sun. Given what’s going on, it begs the question: What does Sarah really think of her ex-husband today? Read on to find out the answer. 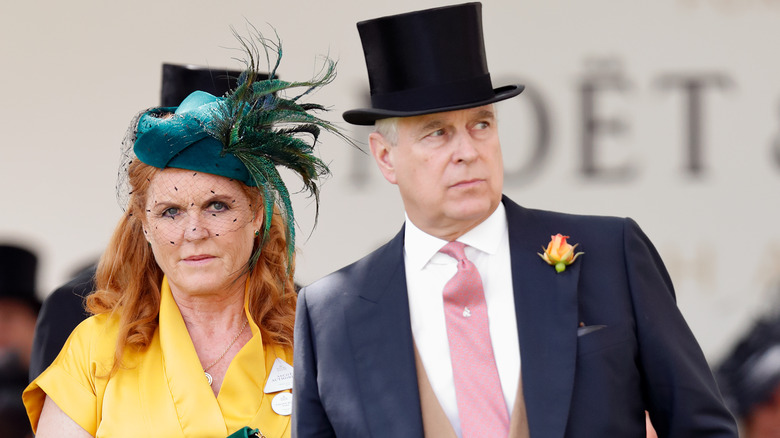 During a charity trip to Poland, Sarah Ferguson sat down for an interview with Polsat News in which she was asked about her relationship with her ex-husband. “I made a commitment that I will always live up to,” she told the outlet, according to a translated article by the New York Post. “When you make that commitment, you decide to marry a prince — and I fell in love with him. I kept my commitment, no matter what. People said, you got divorced. I’m divorced, not divorced … they don’t know how I feel,” she added. “Divorce is one thing, but my heart is my oath, my obligation,” she concluded.

Sarah has not spoken out about the latest allegations brought against Prince Andrew, and it’s unclear how the former couple is dealing with the rumors, but it does seem as though Sarah is sticking by Andrew — through thick and thin — regardless of their marital status. In an interview with People magazine back in July, however, Sarah defended the Duke of York. “Whatever challenges he has, I will stand firm to the co-parenters [sic] that we are together . . . I believe that he’s a kind, good man, and he’s been a fabulous father to the girls,” she told the outlet.