Count on Donald Trump to ruin everything — including the union of two loving families!

On a new episode of Wells Adams‘ podcast, Your Favorite Things, the former Bachelorette contestant and BiP bartender revealed his parents and Sarah Hyland‘s parents have yet to meet each other “for good reason” — AKA different political views!

The 35-year-old explained to his cohost Brandi Cyrus:

“They both fall on different ends of the political spectrum and I’m just sure that someone’s going to get into a fight about something. They are getting to hang out one time. That’s going to be at the wedding and the directive is no one’s allowed to talk about politics.”

The Modern Family star is from New York, while Adams’ family hails from Texas. Sounds like some interesting dinner conversations are ahead!

“Good luck, dude. Oh my God, it’s going to be so funny, man. I feel like someone needs to film . Hopefully Sarah and I get married… it would be so great if someone filmed it. It’s just a bunch of, like, liberal actors and then my dad and, like, my family who are a bunch of conservatives. My dad’s a doctor, my brother-in-law is from oil money in Texas. Like, it’s going to be so weird.”

This sounds so awkward!!

Though both sets of ‘rents are still a mystery to each other, Wells and Sarah have met their respective parental units on multiple occasions! 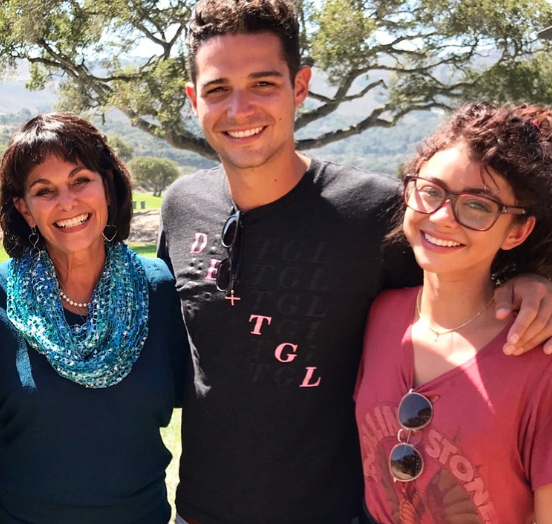 ICYMI, the 28-year-old actress and the reality TV star began dating in 2017. Both have openly gushed in interviews that they’re found “the one” — so the only snag seems to be the people who created them!

Partisan politics plaguing families is BLASPHEMY! We need JUSTICE for these lovebirds so they can marry happily. Though, we’re not sure why Wells is so concerned, unless his brood’s political views are scarier than Trump trying to comfort a victim of literally any unthinkable tragedy in the past few years.

Do you find this parental separation odd, Perezcious readers? Seems like so much friction between important people in their lives will cause trouble down the road. Hopefully once Trump gets impeached the tides will shift!

Fingers and toes crossed for Sarah and Wells’ sake!