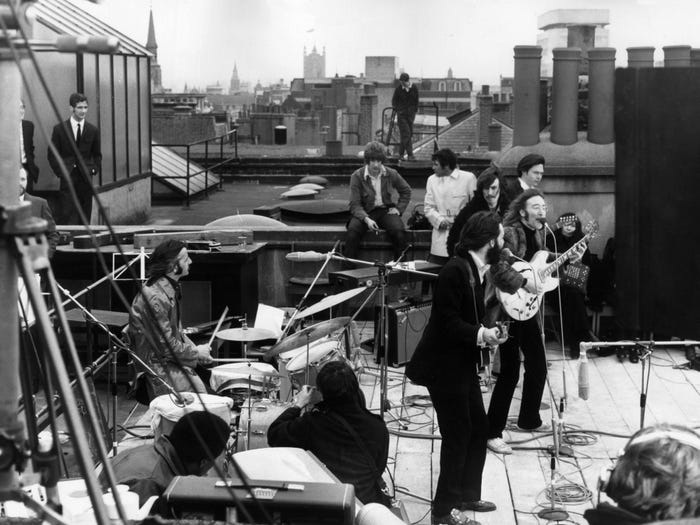 Filmmaker Peter Jackson on Monday released the first footage from his forthcoming documentary "The Beatles: Get Back," which is compiled from 56 hours of never-before-seen footage and more than 150 hours of unheard audio.

The film gives viewers a glimpse into the 1969 writing and recording sessions of 14 new songs — that eventually became the album "Let It Be" — leading up to fab four's final live concert on January 30, 1969, on the rooftop of the Apple Organization building on Savile Row, London. The film will also include for the first time the band's performance in its entirety.

Perhaps most interestingly, the film paints the band's final moments in a positive light, going against the bitterness associated with the band's breakup. Based on the amount of laughing during the sessions, it seems like John, Paul, George, and Ringo weren't at each other's throats — at least not all of the time — but having a good time recording their last material as a group.

Jackson said the video released Monday is not a trailer nor a sequence from the film, rather a montage of moments pulled from the footage to show the vibe and energy of what's to come.

"We wanted to give the fans of The Beatles all over the world a holiday treat, so we put together this five-minute sneak peek at our upcoming theatrical film 'The Beatles: Get Back,'" Jackson says in the video. "We hope it will bring a smile to everyone's faces and some much-needed joy at this difficult time."

The project, which was first announced in January 2019 and acquired by Disney in March, is set to hit theaters in August 2021 after being delayed by the coronavirus pandemic.