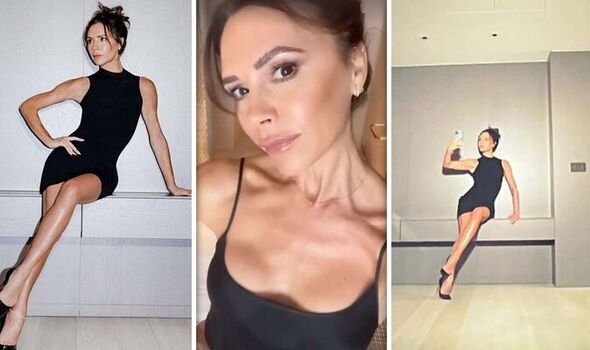 She brought back some memories for fans of the Spice Girls

Victoria Beckham, 48, sparked nostalgic thoughts among fans as she donned a little black dress that reminded them of the fashion designer’s Spice Girls era.

Posh Spice could be seen elegantly posing in two new snaps shared yesterday in view of her 29.9 million Instagram followers.

She could be seen coyly looking away from the camera as she sat cross-legged with one hand on her hip.

In the caption, David Beckham’s wife said she was “on set, slipping into my VB Body mini dress for the weekend.”

Fans of the singer-turned-designer rushed to the comments section to point out her Posh Spice traits.

Jornochico quipped: “Nice! Posh spice is ready to get up on that stage again?”

Erick.mals chimed in: “Posh Spice is coming right back at ya come on.” (sic)

She paired the dress with black stilettos

She shareed a new update on social media

She has 29.9 million followers on the social media platform

Victoria is now a fashion designer

Her eponymous label was launched in September 2008

‘Jersey Shore’ Cast Reveals They’ve Grown Closer To The Situation Since He Went To Prison!