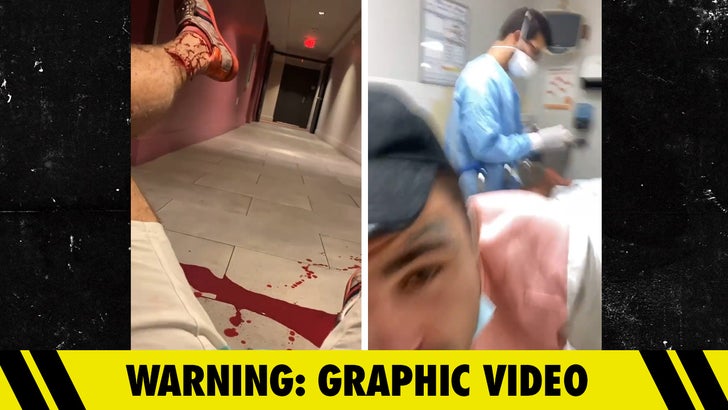 UFC fighter Mike Perry is on the mend after slicing himself open during a bizarre incident late Sunday night — posting footage showing doctors stitching up his wound.

The 29-year-old initially posted video showing him lying in a pool of blood Sunday next to a shattered glass door. It appears as if Perry opened a massive gash while trying to smash through the glass.

While on the ground, Perry says to himself, “F*ck am I supposed to do about this?”

Fans on social media expressed concern for the fighter who seems to be in a downward spiral — following allegations of domestic abuse and a separate violent incident at a steak restaurant back in July.

But, early Monday morning, Perry posted video from what appears to be a hospital room — showing a doctor treating the wound on his lower right leg.

A few hours later, Perry posted more footage showing himself walking his dog — so, all better?

Perry has fought in the UFC since 2016 and has flashed real potential — earning multiple fight of the night and performance of the night bonuses along the way.

But, losses to guys like Cowboy Cerrone, Geoff Neal and most recently Tim Means (in Nov.) have kept him from reaching that next level.

After the attack at the steak restaurant in July, Perry told the UFC he was seeking professional treatment — “including substance and behavioral counseling.”