The NBA player shares a cryptic post about not feeling guilty over his past actions after ‘The Kardashians’ star is spotted hanging out together with the ‘Bottoms Up’ rapper at Justin Bieber’s party.

AceShowbiz –Tristan Thompson is seemingly expressing his feelings after his ex Khloe Kardashian reignited romance rumors with Trey Songz. Taking to social media, the NBA player shared a cryptic post about moving on from his “guilt” over his past actions.

“Let the present be a gift to you to feel alive, rather than a curse that makes you live in the past or future,” continued the note. Over the wise words, the season 3 contestant of “Celebrity Big Brother” added two speaking head emojis. 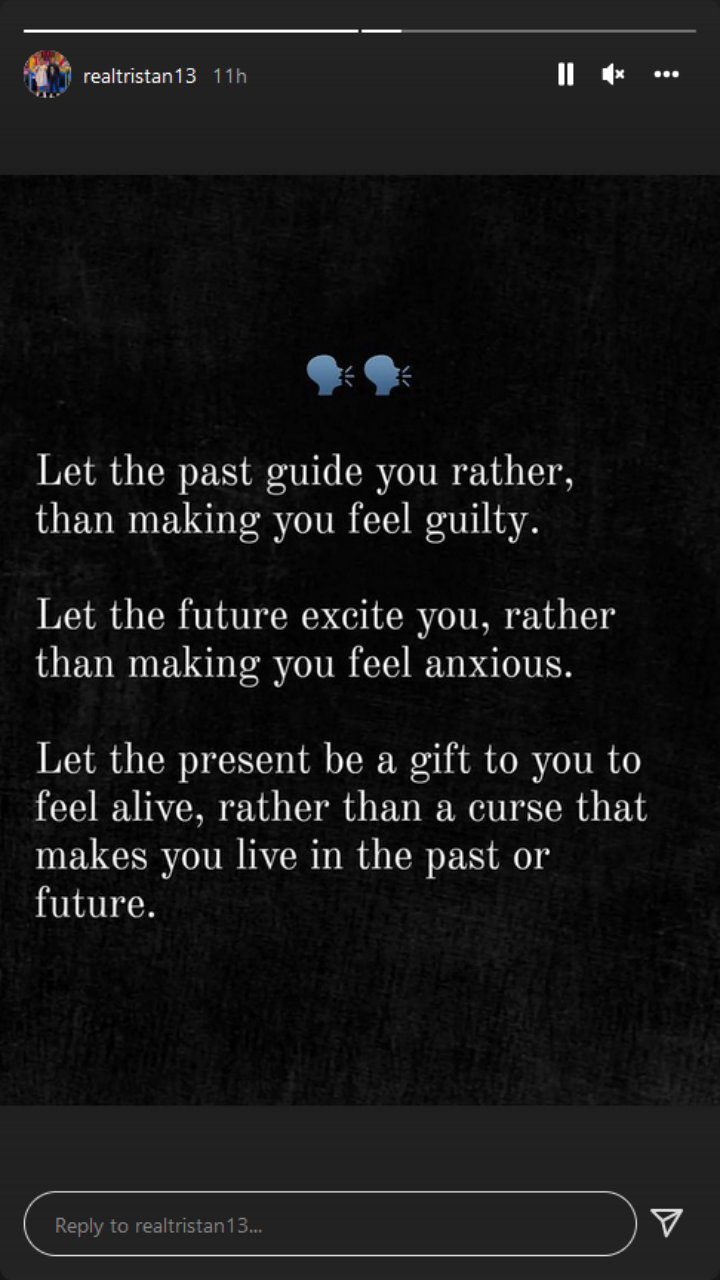 Tristan Thompson hinted that he’s moving on from his past guilt after Khloe Kardashian reignited dating rumors with Trey Songz.

Tristan’s cryptic social media post came after Khloe reignited dating rumors with Trey. “The Kardashians” star and the “Bottoms Up” crooner, who first sparked romance speculations in 2016 following their makeout session at Drai’s in Las Vegas, were caught hanging out together at Justin Bieber‘s party on Saturday night, March 12.

Khloe and Trey reportedly sat next to each other in the same booth at The Nice Guy in West Hollywood. An eyewitness also told Page Six that the two were engaged in plenty of one-on-one conversations.

Khloe and Trey’s date night arrived on the heels of Tristan’s ongoing paternity scandal. Last December, Tristan was sued by his baby mama Maralee Nichols for child support after learning she was expecting a baby with him.

More recently, Maralee “demands” Tristan, who’s not listed on their son Theo’s birth certificate, to pay $47,424 a month for child support and $1 million for legal fees after he “refuses to give child support.” She claimed that she and her newborn baby “are living at a far depressed standard of living than Tristan.”

Tristan wasn’t listed on Theo’s birth certificate because the baby boy’s birth was registered while he was disputing the baby’s paternity. Maralee herself added that she chose not to list Tristan “because he was not present at Theo’s birth.”