The Blink 182 drummer’s stepdaughter from his second ex-wife was very complimentary to her stepdad’s girlfriend in a sweet Instagram comment.

Thing are really heating up! Travis Barker’s, 45, stepdaughter Atiana De La Hoya, 22, definitely approved of  Kourtney Kardashian, 42, and Megan Fox’s, 35, SKIMS photoshoot. The model commented on Kourtney’s Instagram post of the two women sharing apples and cherries for the underwear brand’s ad and wrote that the two women were “HOTHOTHOT” on Wednesday September 22.

Kourtney and Megan took to Instagram on Wednesday to share their photoshoots for SKIMS. In the photo Atiana commented on, the Keeping Up With The Kardashians star was biting to an apple with the Jennifer’s Body actress sinking her teeth into the other side, while they both wore black bras and underwear. In the second photo, Kourtney was feeding Megan a cherry, while they wore matching white SKIMS ensembles.  “Apples or cherries?” she captioned the photo, keeping with the fruit theme. 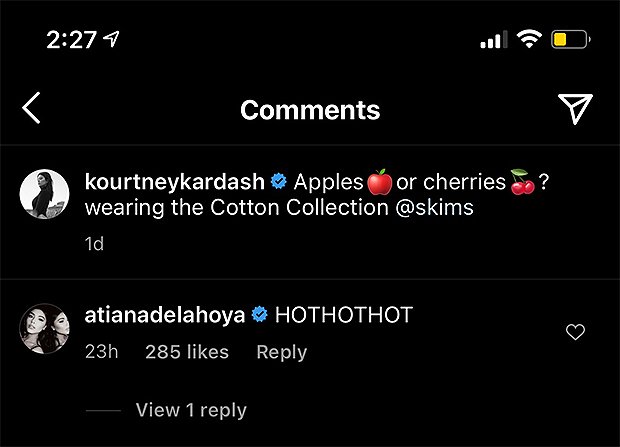 Atiana is Travis’ stepdaughter from his marriage to Shanna Moakler, whom the blink-182 drummer married in 2004 but divorced in 2006. The model’s biological dad is boxer Oscar De La Hoya. While Travis and Shanna had an on and off relationship after splitting, they ended things for good in 2008. While there’s been a bit of drama between Shanna and Travis recently, Atiana seems like she’s kept a strong relationship with her former stepdad. Besides complimenting his girlfriend, Atiana even joined the couple on vacation back in April. 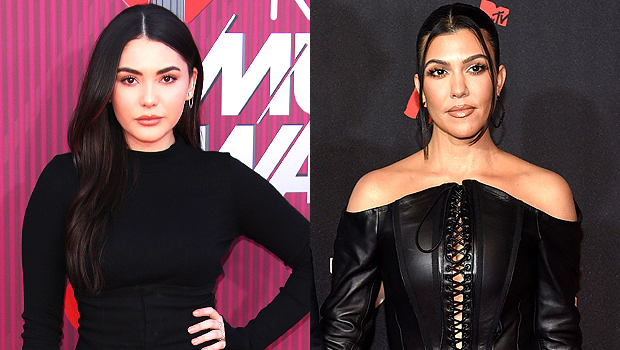 Besides his stepdaughter, Travis has two kids with Shanna: a son Landon, 17, and daughter Alabama, 15. Despite Shanna claiming that she and Travis had a strong co-parenting relationship early in the COVID-19 pandemic in April 2020 in an interview with HollywoodLife, it seems that the exes have grown more distant. Shanna claimed that Kourtney was “destroying [her] family” in a May video from TMZ. Alabama revealed that she hadn’t spoken to her mother in some time in a May TikTok video. In June, Shanna wrote a shady comment seemingly directed at Kourtney, and in July, a source close to her revealed that she was looking to sell some of the things Travis had given her including her engagement ring.

What Are The BTS Members’ Astrology Signs?