After Shanna Moakler shared a few cryptic messages on her Instagram Story on Oct. 18, fans assumed that the 46-year-old former beauty queen was throwing some shade towards her ex-husband Travis Barker and Kourtney Kardashian, who got engaged the day prior. But on Tuesday (Oct. 19) Shanna took her to her Instagram Stories to dispute those claims, and insisted that she hasn’t said a thing about the proposal news. 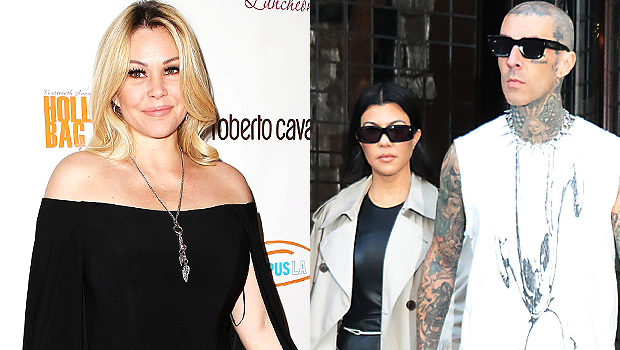 “PSA I haven’t made a comment on anything going on in the world period,” Shanna wrote in the message, which can be read HERE. “So ty to all my new found psychologist, family therapists, spiritual counselors, monsters and desperate housewives…your unsolicited opinions from trash sites have been noted. Whatever would I do without your fortune cookie wisdom.” She ended her message with a peace-sign emoji.

Shanna posted those cryptic messages just 1 day after Travis — whom she was married to from 2004-2008 — popped the question to Kourtney, 42. First, Shanna shared a quote from the late Tupac Shakur, which read, “Before you ask why someone hates you, ask yourself why you give a f**k.” Then she wrote, “Temporarily Closed For Spiritual Maintenance,” which fans assumed was also a reference to Travis’ proposal. This speculation was mostly fueled by the fact that Shanna has actually slammed “Kravis” before, including in May, when she accused the couple of causing a strain on her relationship with her  kids Landon, 18, and Alabama, 15, whom she shares with Travis.

For now, fans can continue speculating over whether or not Shanna’s cryptic posts were shady. But according to one of our sources, one person that isn’t bothered at all by this drama is the Blink-182 drummer’s new fiancee. “Kourtney has no idea if Shanna intended to throw shade, but she isn’t letting it bother her one way or another,” the source told HollywoodLife. “Nobody can rain on Kourtney’s parade right now. She’s literally on cloud nine.”

Josh Duggar's Trial: Jed Duggar's Work History With Josh Duggar May Be Why He's Called as a Witness