Sarah Harding has revealed she’s taking cannabis oil to ease her pain as she continues to undergo treatment for breast cancer.

In an extract from her autobiography Hear Me Out, the Girls Aloud star, 39, said she decided to try the treatment after it was recommended to her by pal Duncan James.

It comes after Sarah also revealed that her cancer treatment is ‘moving in the right direction’ and her tumours have ‘shrunk,’ since she publicly revealing her diagnosis back in August. 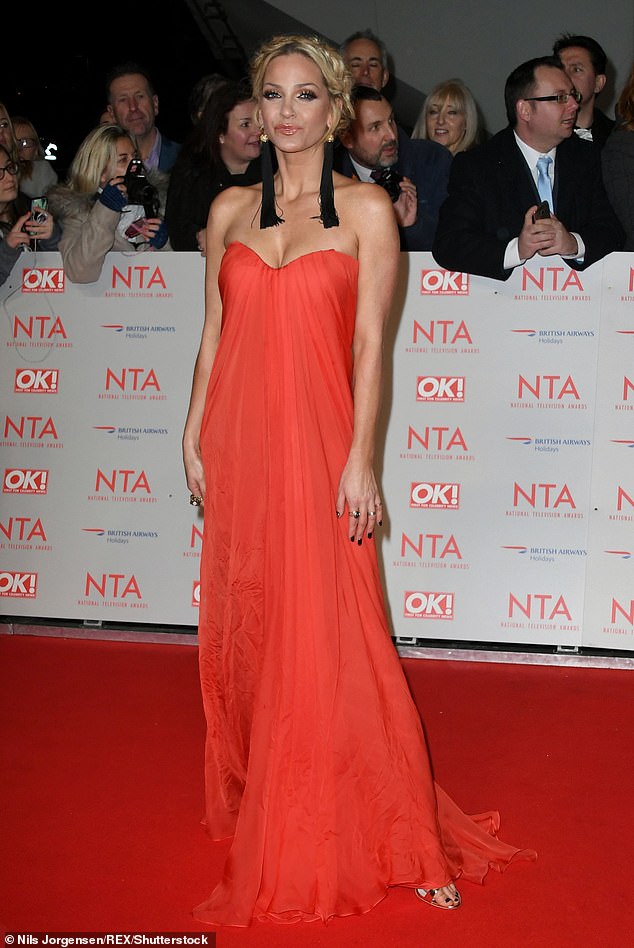 Improving: Sarah Harding, 39, has revealed she’s taking cannabis oil to ease her pain as she continues to undergo treatment for breast cancer

In her book Sarah revealed Duncan suggested she try CBD oil after he found benefits from the treatment when he suffered a back injury during a stage show.

She said: ‘He’d used it after he suffered a massive back injury, while he was doing drag and wearing heels in Priscilla, Queen Of The Desert.

‘I figured that if it was something that could help Duncan in that situation, then I should definitely give it a go.’ 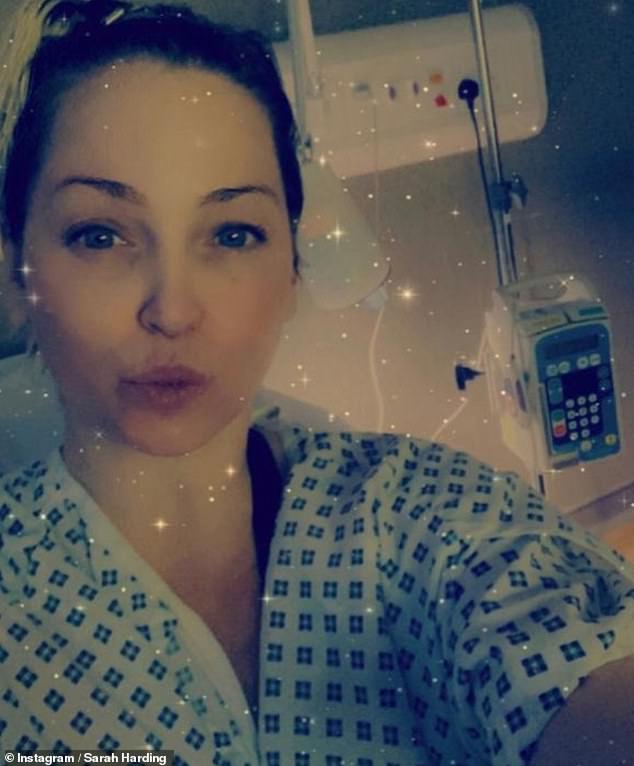 ‘I figured I should definitely give it a go’: The Girls Aloud star, 39, said she decided to try CBD after revealing her cancer treatment is ‘moving in the right direction’

CBD oil is a legal cannabinoid that can be sold in the UK, and is thought to have some medicinal properties, including relieving inflammation, pain and anxiety.

It comes after Sarah revealed tumours in her brain and lung have shrunk with treatment.

The musician revealed she had been battling breast cancer in August 2020 and recently said she does not know how many months she has left to live after her cancer spread to her spine.

The media personality spoke of her joy that treatment – including weekly chemotherapy sessions – had achieved this milestone and that she was able to enjoy a ‘relaxing Christmas.’

WHAT IS CBD OIL AND IS IT LEGAL IN THE UK?

Government advisers made it legal to buy CBD supplements in 2016

CBD oil is a legal cannabinoid that can be sold in the UK.

CBD contains less than 0.2 per cent of the psychoactive substance THC.

Although the oil has been thought to have some medicinal properties, including relieving inflammation, pain and anxiety, there is no conclusive science.

Suppliers in England and Wales have to obtain a licence to sell CBD as a medicine.

Manufacturers are able to avoid the strict regulation by selling it as a food supplement – ignoring the lengthy process of gaining a medicinal licence.

CBD products comes in many forms, the most popular being an oil – which users spray under their tongue – or gel tablets which melt slowly in the mouth.

Government advisers at the MHRA found that CBD has a ‘restoring, correcting or modifying’ effect on humans.

Cannabis oil, which is different to CBD oil because it contains THC – the compound that gives users a ‘high’ – is illegal under UK laws.

Billy Caldwell, from Castlederg, Northern Ireland, made headlines last April when he became the first Briton to be prescribed it on the NHS.

Cannabis oil, which reportedly has no side effects, influences the release and uptake of ‘feel good’ chemicals such as dopamine and serotonin. 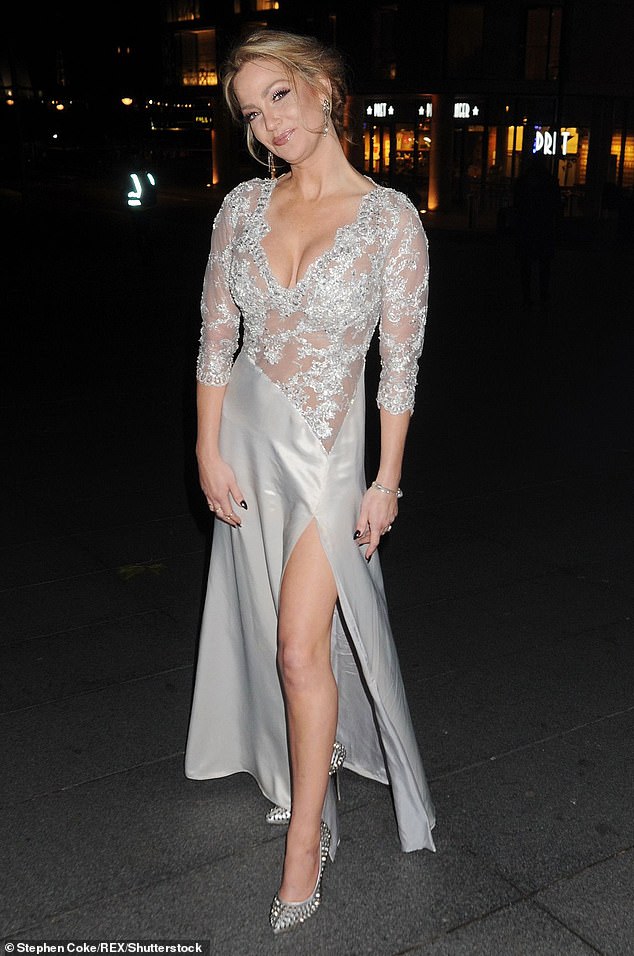 Scary: The musician revealed she had been battling breast cancer in August 2020 and recently said she does not know how many months she has left to live

Ending the book, Sarah wrote: ‘MRI scans at the end of December revealed that the tumours in my brain and in my lung have shrunk a bit with the treatment.’

The TV star said that while she didn’t know ‘exactly what this means’, ‘right now, every little victory feels momentous.

She continued: ‘With this news under my belt, I was able to enjoy a relaxing quiet Christmas with mum and yes, I got plenty of lovely Christmas pressies.’

Sarah ends the book with: ‘At the moment, I’m just grateful to wake up every day and live my best life, because now I know just how precious it is.’

In a further recent excerpt from the book, shared by The Times on Saturday, Sarah said Christmas 2020 was ‘probably her last.’ 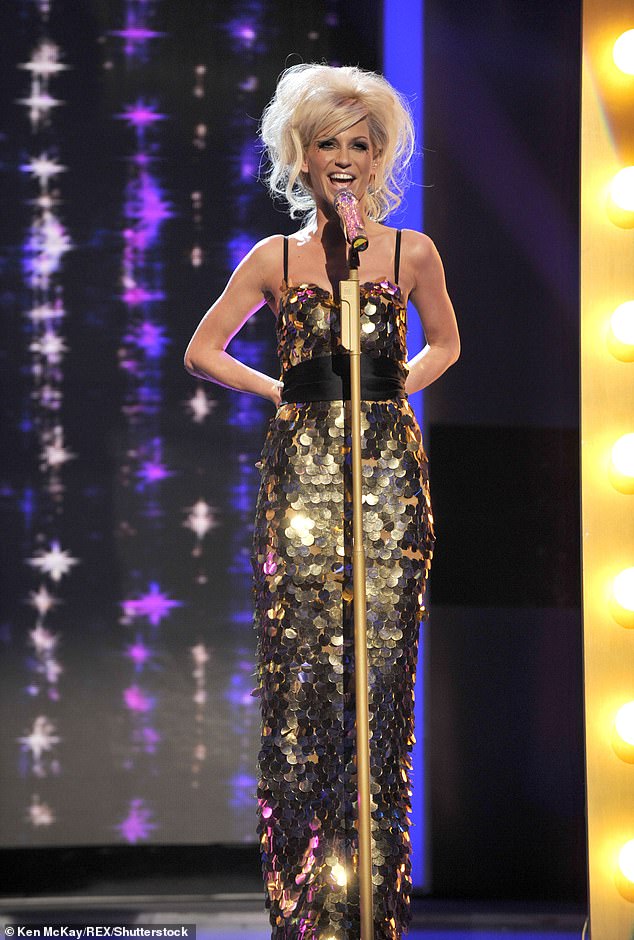 She said: Ending the book, she said: ‘MRI scans at the end of December revealed that the tumours in my brain and in my lung have shrunk a bit with the treatment’ (pictured 2008)

In the latest tragic update from the book, she penned: ‘In December my doctor told me that the upcoming Christmas would probably be my last. I don’t want an exact prognosis. I don’t know why anyone would want that…

‘Comfort and being as pain-free as possible is what’s important to me now. I’m trying to live and enjoy every second of my life, however long it might be. I am having a glass of wine or two during all this, because it helps me relax.’

The singer added that she now wants to try and ‘enjoy’ herself as she doesn’t know ‘how many months I’ve got left’.

At present, the Call The Shots hitmaker is considering her options for treatment of the secondary tumour at the base of her spine, which may now have spread to her brain.

However, she’s adamant that she doesn’t want to undergo radiotherapy and risk losing her hair, with Sarah noting that although this may sound ‘vain’, she feels that if she only has months left to live then it’s not worth it.

The star explained how after facing the agony of losing her breast, she doesn’t want to lose her signature blonde locks as well. 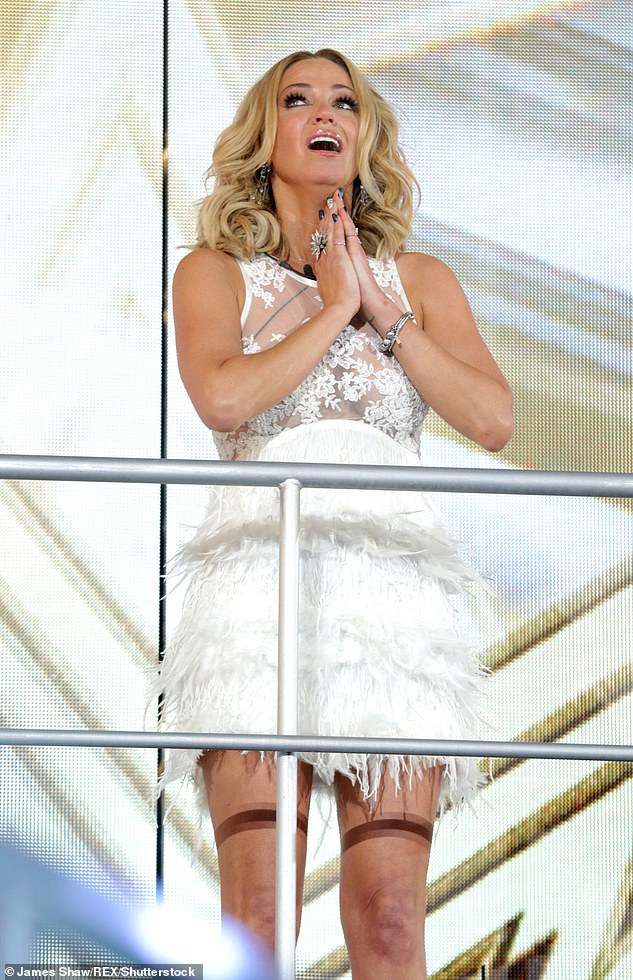 Illness: In another tragic update from the book, she penned: ‘In December my doctor told me that the upcoming Christmas would probably be my last. I don’t want an exact prognosis’ 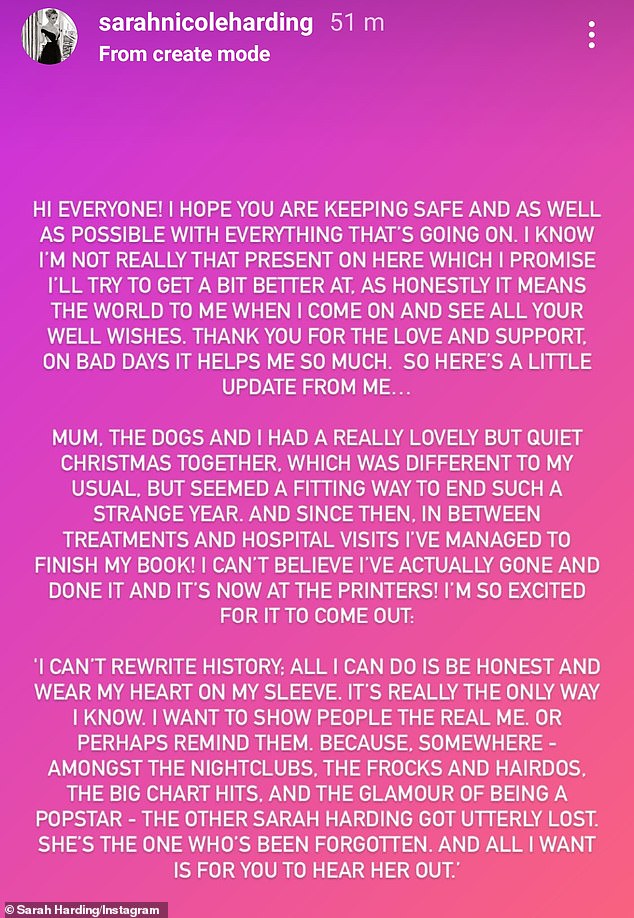 Sharing an update: In January, the singer told her Instagram followers that she had a ‘lovely but quiet’ Christmas with her mother and their dogs, rounding out a ‘strange’ year 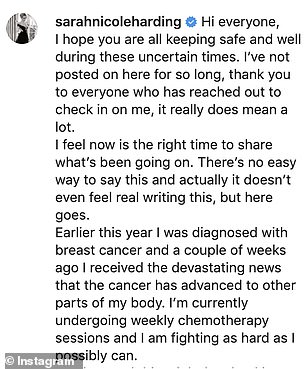 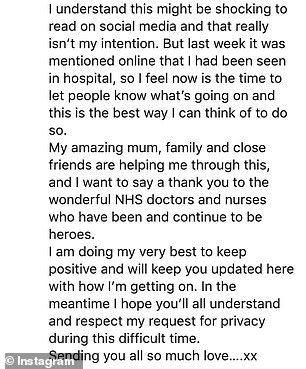 Sarah went to to say that her priority now is to spent as much time as possible with her mother and friends before she dies, while the star is also hoping to throw a huge party to say ‘goodbye’ to her loved ones.

As Sarah looked back at the start of her journey, she added: ‘At first I thought it was just a cyst. The trouble was the pain was getting worse. It got so bad that I couldn’t sleep in a bed. Eventually my skin started to bruise. By now I was terrified.

‘One day I woke up realising I’d been in denial. Yes there was a pandemic but it was almost as if I’d been using that as an excuse not to face up to the fact that something was very wrong.’

Sarah went on to detail her experience of being put into a coma for an extended period of time, and added that she struggled to form speech even when she was taken out of it.

Sarah explained: ‘With both my lungs and kidneys failing, doctors decided to put me into an induced coma. Even once I was off the ventilator I couldn’t speak properly. All I could do was make noises like a chimpanzee trying to communicate.’

What is breast cancer?

Breast cancer develops from a cancerous cell which develops in the lining of a duct or lobule in one of the breasts.

When the breast cancer has spread into surrounding breast tissue it is called an ‘invasive’ breast cancer. Some people are diagnosed with ‘carcinoma in situ’, where no cancer cells have grown beyond the duct or lobule.

Most cases develop in women over the age of 50 but younger women are sometimes affected. Breast cancer can develop in men though this is rare.

Staging means how big the cancer is and whether it has spread. Stage 1 is the earliest stage and stage 4 means the cancer has spread to another part of the body.

The cancerous cells are graded from low, which means a slow growth, to high, which is fast growing. High grade cancers are more likely to come back after they have first been treated.

A cancerous tumour starts from one abnormal cell. The exact reason why a cell becomes cancerous is unclear. It is thought that something damages or alters certain genes in the cell. This makes the cell abnormal and multiply ‘out of control’.

Although breast cancer can develop for no apparent reason, there are some risk factors that can increase the chance of developing breast cancer, such as genetics.

What are the symptoms of breast cancer?

The usual first symptom is a painless lump in the breast, although most breast lumps are not cancerous and are fluid filled cysts, which are benign.

The first place that breast cancer usually spreads to is the lymph nodes in the armpit. If this occurs you will develop a swelling or lump in an armpit.

How is breast cancer diagnosed?

If you are confirmed to have breast cancer, further tests may be needed to assess if it has spread. For example, blood tests, an ultrasound scan of the liver or a chest x-ray.

How is breast cancer treated?

Treatment options which may be considered include surgery, chemotherapy, radiotherapy and hormone treatment. Often a combination of two or more of these treatments are used.

How successful is treatment?

The outlook is best in those who are diagnosed when the cancer is still small, and has not spread. Surgical removal of a tumour in an early stage may then give a good chance of cure.

The routine mammography offered to women between the ages of 50 and 70 mean more breast cancers are being diagnosed and treated at an early stage.

Britney Spears to Jamie Lynn: You Abandoned Me When I Needed You Most!