Prince Harry and Meghan Markle currently live in California with their kids Archie and Lilibet, but they’ve retained Frogmore Cottage as their home in England—a gift from the Queen after their wedding. However, turns out the Duke and Duchess of Sussex had originally hoped to move from Kensington Palace (where they first lived together) to a “suite of apartments” in Windsor Castle. 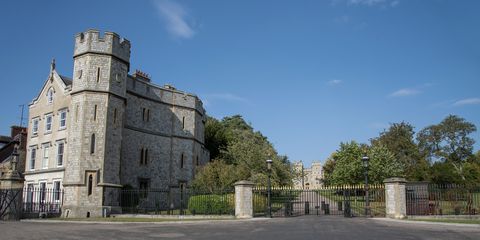 Per royal reporter Katie Nicholl in her book The New Royals (excerpted in The Daily Mail), the Queen offered Meghan and Harry Frogmore Cottage instead.

“The cottage was a big deal,” Lady Elizabeth Anson, who spoke to the Queen frequently during this time, told Katie, “The Queen’s entrance into the gardens is right next to their cottage. It is essentially her back yard, her solitude, and her privacy. She was giving that up in gifting Harry and Meghan Frogmore Cottage. We all thought it was very big of her. She said, ‘I hope they’ll respect it.'”

The couple moved into Frogmore Cottage in April 2019, and while they eventually stepped away from senior royal duties and moved to the United States, they’ve kept Frogmore Cottage as their England residence. In fact, the couple are said to have stayed there while they were in the U.K. for the Queen’s funeral and mourning period.

Meanwhile, Windsor Castle is expected to eventually be occupied by Kate Middleton and Prince William, who also have a home a few minutes away from Meghan and Harry called Adelaide Cottage.