Piers Morgan, 54, and Michael Barrymore, 67, delved deep into the veteran presenter’s turbulent past on Life Stories yesterday. Swarms of fans tuned in to watch the embattled comedian and presenter open up about his struggle with addiction and the more controversial aspects of his life in the public eye, with host Piers taking to Twitter earlier today to reveal the success of the programme. “Strong ratings for @MrBarrymore Life Stories last night,” he told his 6.6 million followers. “Audience share grew from 14 per cent to 22 per cent through the hour, which is very unusual.”

Appearing to hint that how well Life Stories had performed could lead to Michael returning to screens again, the Good Morning Britain star added: “Will this spark his TV comeback?”

Express.co.uk has contacted a representative for Michael asking about any plans for upcoming TV work.

The entertainer has been largely absent from the public eye since a man was found dead in his swimming pool at his home in Roydon, Essex, in 2001.

In 2007, Michael was arrested in connection with the death of Stuart Lubbock, 31, and was later released without charge.

Two years ago, a high cost judge ruled his arrest was unlawful and he won compensation from Essex Police for wrongful arrest.

In recent years, Michael has appeared on a small handful of shows including Celebrity Jeremy Kyle, on which he said he had once attempted suicide. 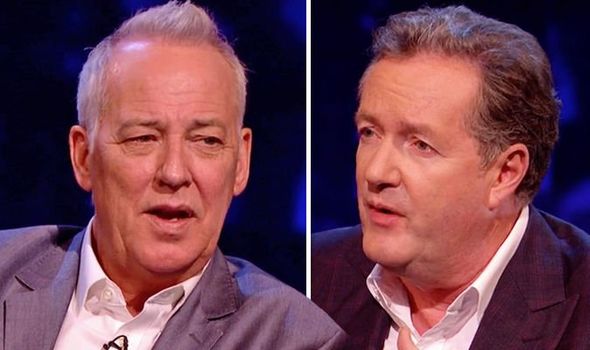 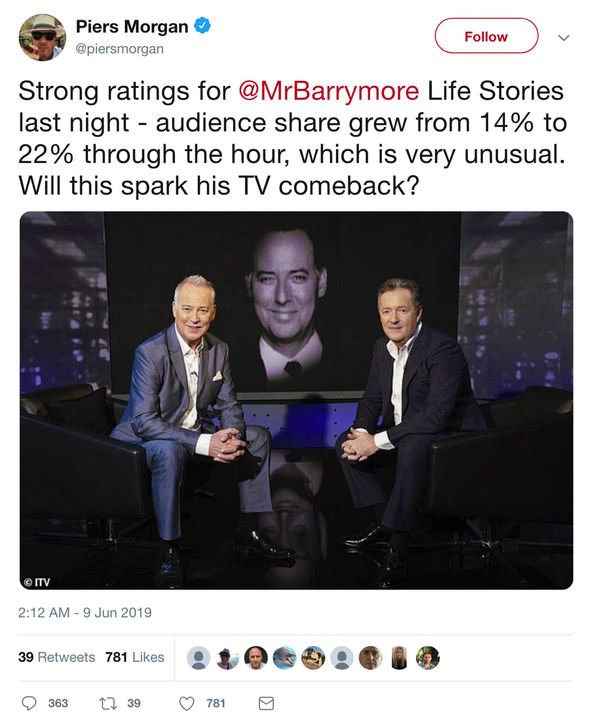 He also did a stint on Celebrity Big Brother in 2006.

In 2012, the star, whose real name is Michael Parker, said he was dropping his stage name, telling The Independent the press had “killed Michael Barrymore”.

The following year, Michael told the Daily Mail he was working in a garden centre, saying: “I don’t get paid for it. I help out because I enjoy gardening.”

“No parent should have to bury their young,” he told the host.

“I had nothing to do with Stuart. I am innocent. I am not 99.9 per cent innocent, I am 100 per cent innocent and I am entitled to walk around with my head held high for the rest of my life,” he added. 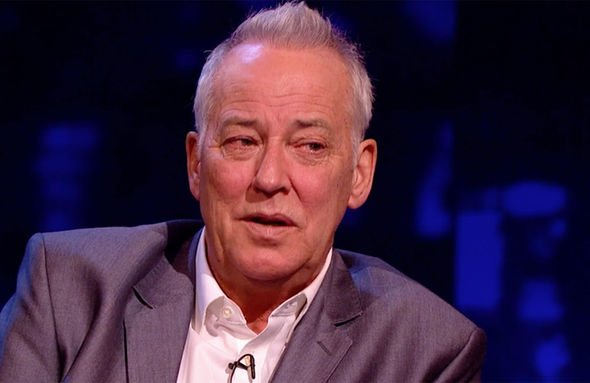 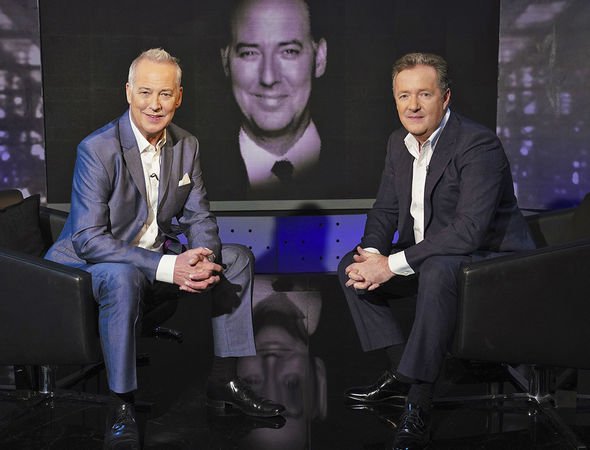 Michael said he was advised by lawyers to stay silent at the time of Stuart’s death, saying: “I can see lots of things in hindsight.

“I’m not making excuses. What more do you want? I’m sorry. I couldn’t be more sorry.

“I have to live in hope that somehow, somewhere, there will be an answer,” he explained.

“I just hope it will be within what is left of my life.”

At the end of the interview on Life Stories, during which he spoke about his battle with drug and alcohol addiction, his relationship with Princess Diana and his sexuality, Michael Barrymore became overwhelmed with emotion, breaking down in tears as he apologised: “Sorry, f***ing hell.”

“It’s not easy, going over this stuff must be very difficult for you,” Piers said, consoling him.

The presenter had previously called the episode “the most raw, emotional and dramatic show in Life Stories history”.

Piers Morgan’s Life Stories continues with Harry Redknapp next Saturday at 9.35pm on ITV. Catch up with Michael Barrymore’s episode now on the ITV Hub.