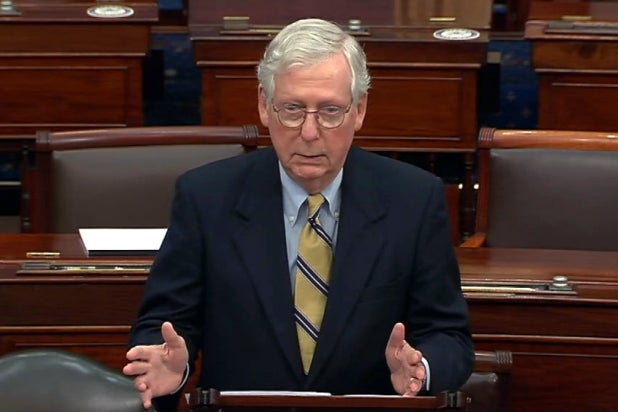 Moments after voting to acquit Donald Trump in the second impeachment trial, Senate Minority Leader Mitch McConnell lambasted the former president’s “disgraceful dereliction of duty” during the Jan. 6 insurrection at the U.S. Capitol.

“There is no question, none, that President Trump is practically and morally responsible for provoking the events of the day,” McConnell said. “The people who stormed this building believed they were acting on the wishes and instruction of their president.”

Although the Senate voted 57-43 to convict Trump, which was 10 votes shy of the two-thirds majority needed for conviction in an impeachment trial, the Kentucky Republican noted that the former president could still face legal consequences for his “reckless actions.”

“President Trump is still liable for everything he did while he was in office as an ordinary citizen.He didn’t get away with anything — yet,” he said. “We have a criminal justice system in this country, we have civil litigation.

The Republican leader also defended his decision to join all but seven senators of his party to vote not guilty, citing the fact that Trump no longer holds office.

McConnell hinted that he might have joined in calls for a guilty vote if Trump were still president. “If the president was still in office, I would have carefully considered whether the House managers had proved their charge. By the strict criminal standard, the president’s speech probably was not incitement,” he said. “However, in the context of impeachment the Senate might have decided this was acceptable shorthand for the reckless actions that preceded the riot.”

He added, “But in this case the question is moot because former president Trump is constitutionally not eligible for conviction.”

In addition, he argued that holding a Senate trial before the Jan. 20 inauguration of Joe Biden “was never possible” even though he controlled the Senate at that time. In light of that timing, he said, “The Senate’s decision today does not condone anything that happened on or before that terrible day. It simply shows that the Senate did what the former president failed to do: We put our constitutional duty first.”

Billie Eilish Shares Clip Of New Single ‘Happier Than Ever’

Dr. Ruth Reveals the No. 1 Sex Question She Gets