Want to talk about a couple that fans have stayed through sickness and in health, through strange album cycles and touching Californian odes, through compelling films and ones that were trash? Miley Cyrus and Liam Hemsworth are truly it. They’re an artistic, edgy, well-meaning, and philanthropic couple who got together through their creative work, and have been trying to hold on and create something beautiful ever since. These two may have gotten married in December 2018, but Miley Cyrus’ 10th anniversary Instagram Story about Liam Hemsworth reminds us: Cyrus and Hemsworth (as well as their fans) been on this ride for a very long time.

On June 11, Cyrus took to Instagram to post a picture of her and Hemsworth fromThe Last Song. (For those of you who aren’t Nicholas Sparks stans, The Last Song is a 2010 romantic drama where Cyrus and Hemsworth play star-crossed lovers who fall in love against the backdrop of summer and a beach town. It’s based on a 2009 book of the same name.) The Last Song is not Oscar bait, but it’s a safe bet for a nostalgic movie night with your girls and a bottle of rosé. The movie’s summery vibe is iconic.

Cyrus shared the pic with the caption "Started diggin’ you in 2009. Sh*t got deep. Happy anniversary." and topped it off with a wedding ring emoji. She posted something similar for her 10th anniversary on Twitter. 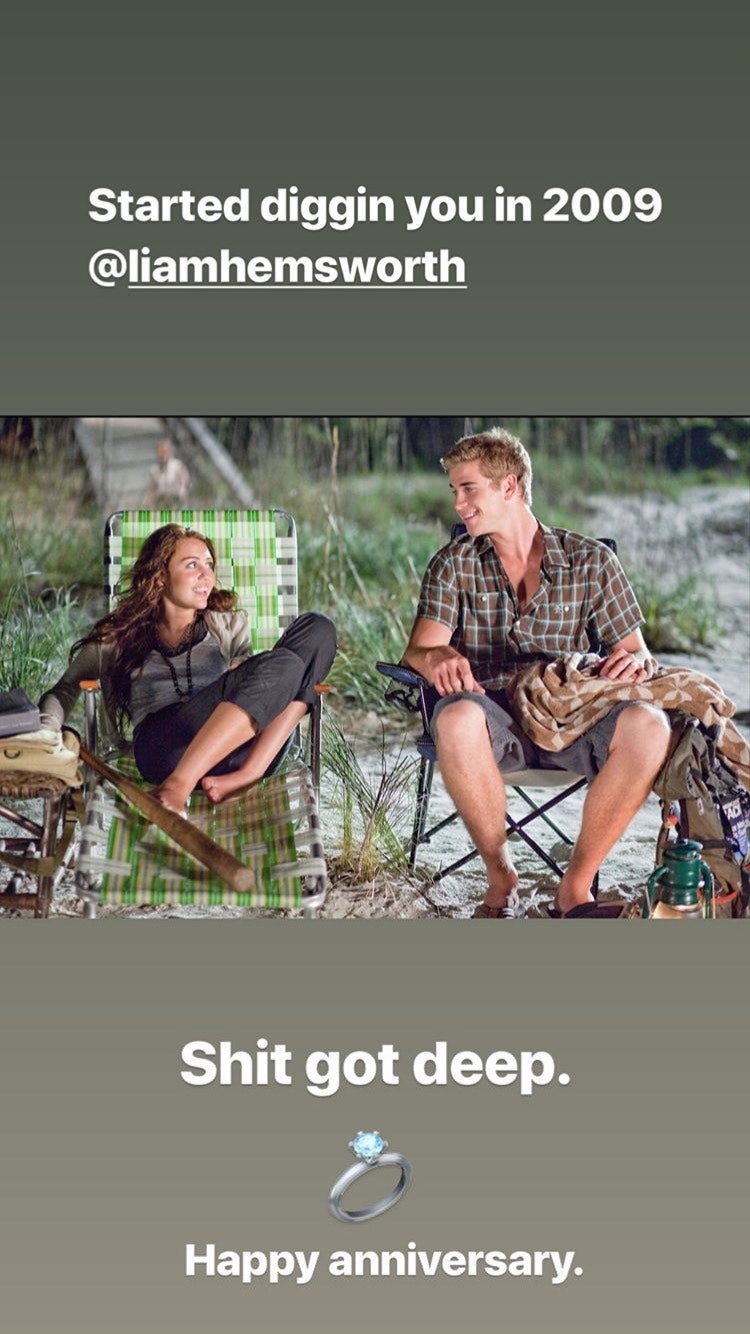 The set of The Last Song is where Cyrus and Hemsworth first met in 2009. By March 2010, they were walking red carpets — including The Last Song‘s premiere — as a couple. In June 2010, Cyrus even divulged that "Can’t Be Tamed" and other songs from that era were written with Hemsworth in mind.

Still, their whirlwind romance wasn’t without its pauses and breaks. Cyrus and Hemsworth broke up in August 2010 and November 2010. Even after they get back together in April 2011 and go on to get engaged in June 2012, their relationship is called off again in 2013. It isn’t until 2016 — after Cyrus and Hemsworth saw other people — that fans heard about the two as an official couple again. 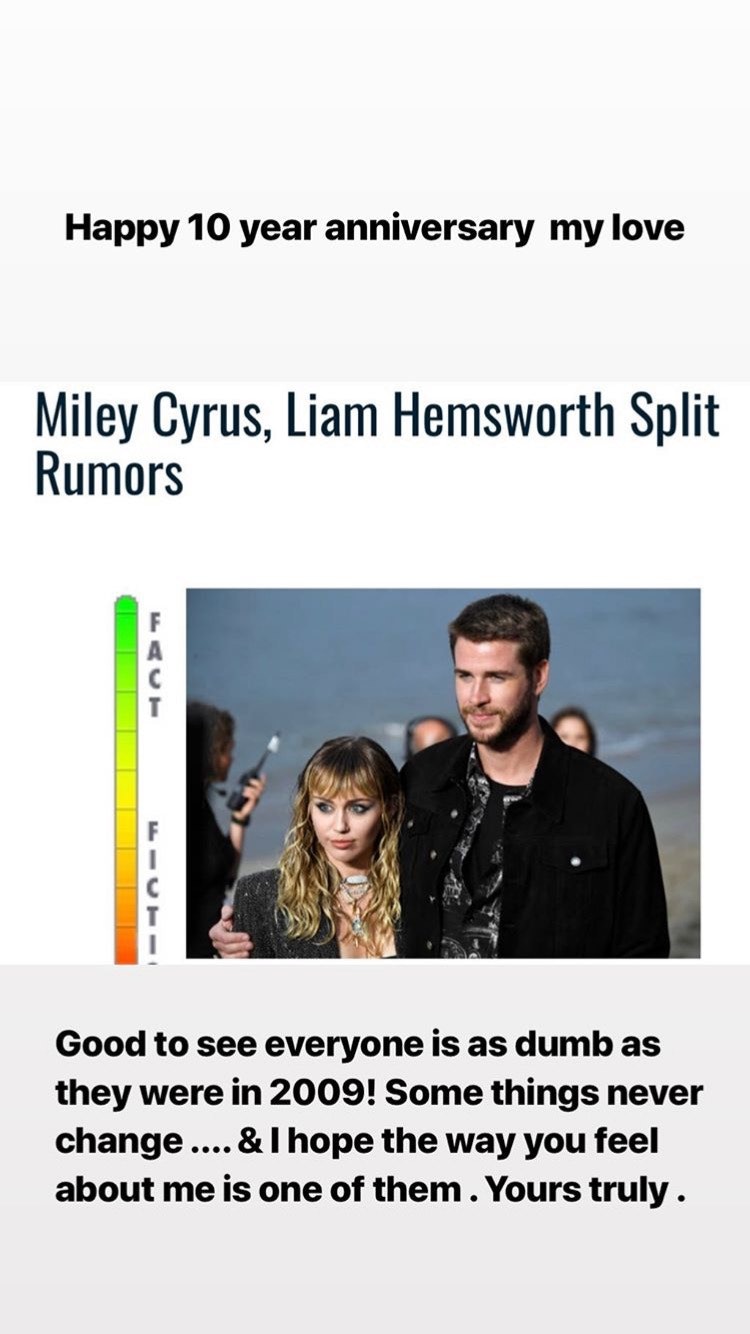 In her 10th anniversary Instagram story, Cyrus threw major shade to the rumors and implications that her and Hemsworth are breaking up. (The screenshot is a June 10 article from Gossipcop.com. which is actually a pro-Cyrus-and-Hemsworth article that basically says shame on OK! and RadarOnline for spreading breakup rumors) Reading it, you can just hear Cyrus, with her slight Tennessee accent, quipping, "Good to see everyone is as dumb as they were in 2009!"

Truly, Cyrus dropping "Malibu" in May 2017 — a love song not just about the city but about her Hemsworth, too — really sealed the deal and demonstrated how unconditional her love for Hemsworth is. Of the song, Cyrus said to Billboard: "They’re going to talk about me if I come out of a restaurant with Liam. So why not put the power back in my relationship and say, ‘This is how I feel’?"

Apart from making some millennials feel old, Cyrus post is overall a sweet but on-brand tribute to her solid relationship with Hemsworth. I think I speak for all Cyrus supporters when I say I, too, hope the way Hemsworth feels about Cyrus never changes.

Is Mariah Carey About to Drop ‘Glitter’ on Streaming?