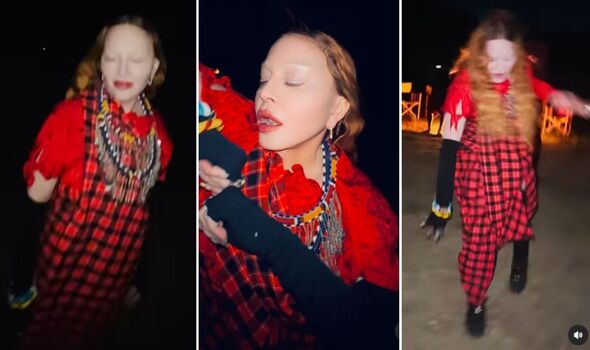 Madonna has just released a previously unheard demo version of her hugely popular 2019 track Back That Up To The Beat – originally developed with Pharrell Williams – and she shared an audio snippet of it alongside video footage of herself and her kids demonstrating their best dance moves.

Madonna rocked flame-coloured hair and a bright red tartan dress, which she hoisted up to her thighs as she and her family danced the night away on their African holiday.

Admiring viewers pointed out that her kids all had “mad talent” as they observed biological son Rocco, 22, backflipping and adopted son David Banda, 17, breakdancing.

Also present, as the Material Girl hitmaker continued her fun-packed New Year celebrations, were children Mercy, 16, and twins Stella and Estere, 10, who could all be seen with her at a campsite with a roaring fire blazing behind them.

The family are currently in Kenya, where they have enjoyed an elephant safari, as well as “dancing under the full moon with the Masai and good music”.

Madonna didn’t divulge what music had been playing at their camp’s party, but instead dubbed over the sound with a recording of her own track, Back That Up To The Beat, as she shared her latest antics with 18.6 million followers.

Madonna might be 64, but she looked a mere fraction of her age as she exuded energy at the camp in Kenya, which she transformed into a makeshift dance floor for the night.

Admiring followers praised the kids’ dance skills, including @rmurpheydigital, who exclaimed: “Is it just me or do all of her kids have mad talent? David Banda has got movie star looks and moves!”

Madonna had previously been on a horseback safari

Madonna shared a snap from earlier in the day of a cheetah lounging in the bush, followed by another of herself lying in the ground in the Kenyan plains in apparent exhaustion, with the caption: “After we ride, we rest”.

Last week, Madonna and family also did charitable work for a school in Nairobi

Just two days after seeing in the New Year, which the family celebrated with another epic dance party, Madonna and her kids volunteered to make a mosaic for the SHOFCO Kibera School of Girls in the Kenyan capital. The songstress posted a sweet photo of her twin girls Stella and Estere, who are ten, grinning for the cameras on location at the school, and captioned it: “Knowledge is power”.

Prior to the Nairobi trip, Madonna took the kids to London for the Christmas season

Madonna also recently shared festive footage of herself and the family from Hyde Park’s Winter Wonderland, while son Rocco – whose film director father Guy Ritchie is based in the capital – was seen solo on a night out at the Curzon Theatre in Mayfair too.

We Have Nicolas Cage to Thank for Johnny Depp's Acting Career

Jill Duggar Rocks SHORT Miniskirt at Waterpark: I Can Finally Wear What I Want!