The new series has already left viewers hooked, despite only being one episode down.

Yet Love Island fans were left raging tonight after the ITV Hub crashed and left them unable to watch the first episode.

As the brand new series made its debut, watchers were met with error, glitches, buffering screens and numerous requests to log in. 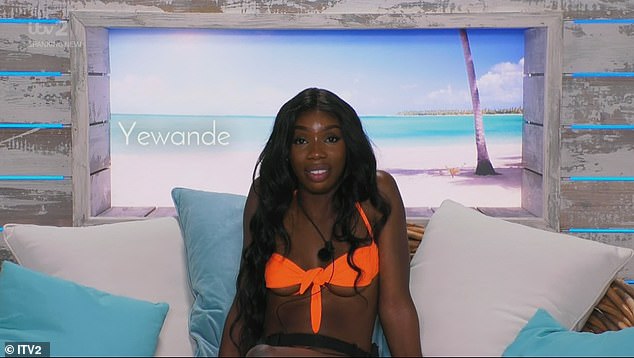 Crash: Love Island fans were left raging tonight after the ITV Hub crashed and left them unable to watch the first episode

The broadcaster was forced to apologise to frustrated fans – after one claimed their daughter was in tears following the technical glitch.

Fuming fans were not happy about missing the new series and took to Twitter to share their rage.

Another Love Island fan wrote: ‘can anyone else not watch #LoveIsland because of @itvhub crashing!! im positively fuming #itvhub’ 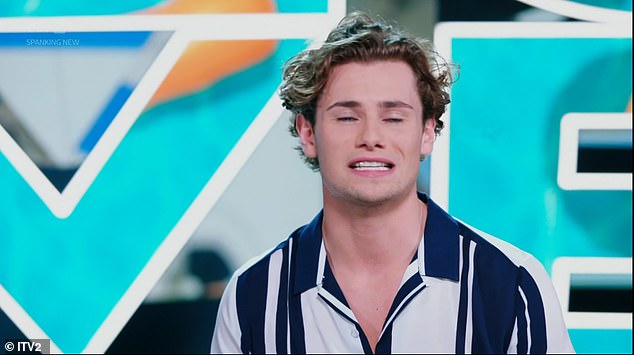 Oh dear: As the brand new series made its debut, watchers were met with error, glitches, buffering screens and numerous requests to log in 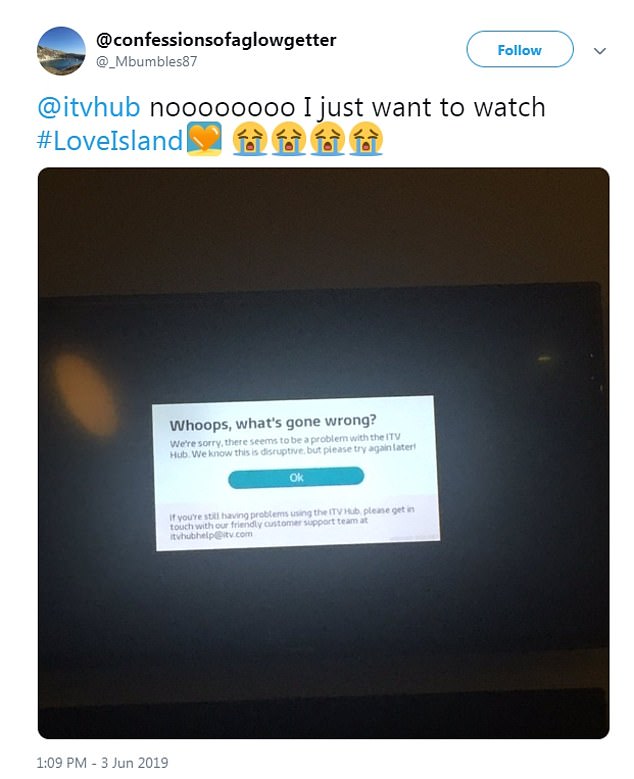 Another show watcher fumed: ‘When the itvhub app dosnt want to work so you can’t watch #LoveIsland’

One wrote: ‘Why isnt @itvhub working?? I want to watch #LoveIsland’

In the end, the social media meltdown got so much that the ITV Hub’s official Twitter account was forced to issue a statement. 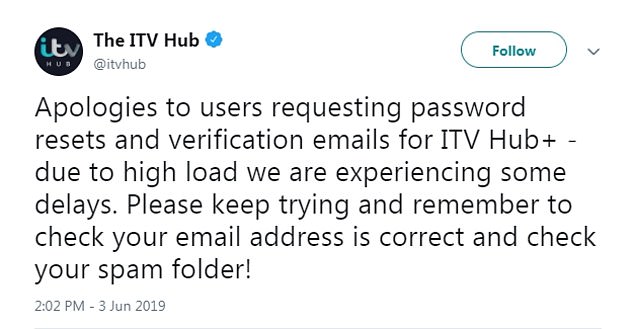 They told viewers: ‘Apologies to users requesting password resets and verification emails for ITV Hub+ – due to high load we are experiencing some delays.

‘Please keep trying and remember to check your email address is correct and check your spam folder!’.

It’s not the first time ITVHub has been blasted for its poor streaming service, as last year saw it crash numerous times much to fans dismay and annoyance.

It’s no wonder viewers were left angry, as the first episode saw bikini-clad girls sent into the villa first – having been transported in convertible jeeps, sure to make their excitable entrances and pop a prosecco cork or two in the process. 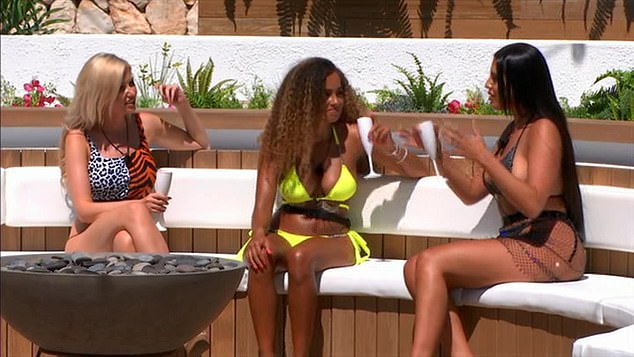 And… they’re off: The first round of singletons made their grand entrances into the Love Island villa on Monday evening

First in was Amy Hart – an air stewardess who claimed she ‘was once invited to join the Mile High Club’.

She entered the show alongside Amber Gill, a beautician who has ‘never been rejected in her life’. 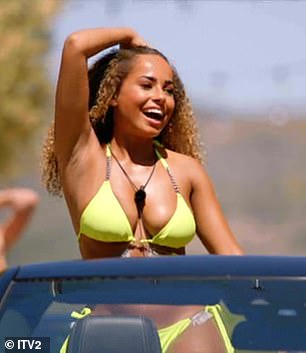 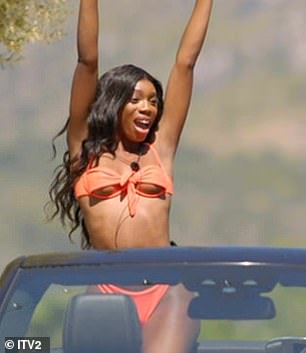 Making their entrance: Amber Gill [L], a beautician who has ‘never been rejected in her life’, promised that if anyone nasty appears in the villa she will ‘ruin their life’, before referencing her ‘miserable resting bitch face’. Scientist Yewande Biala [R] ‘researches vaccines for cancer’ and ‘never gets on with men on dates’

She also promised that if anyone nasty appears in the villa she will ‘ruin their life’, before referencing her ‘miserable resting bitch face’.

Next was pharmacist Anna Vakili who exclaimed that she’s ‘never going to find someone at work because they’re all old or sick, so not in the mood.’

She then compared herself to Meghan Markle, who married Prince Harry in her 30s. She said: ‘My parents tell me, you’re 28, you haven’t got long left!’

Scientist Yewande ‘researches vaccines for cancer’ and ‘never gets on with men on dates’. She entered the villa fourth, swiftly followed by surfer Lucie Donlan, who claimed that ‘this Surfing Barbie needs to find a Bev [hot man]’. 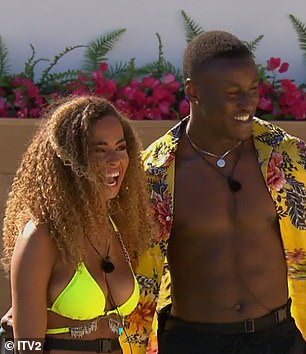 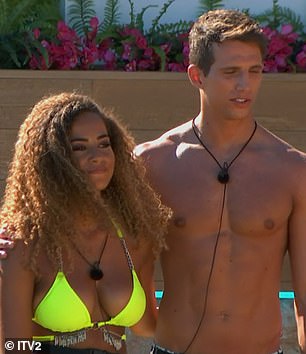 Swapsies: Next in was Sherif Lanre who wasn’t chosen by anyone and so was left to select someone himself – going for Amber. She later traded him in, however, for aviation technician Callum Macleod

It was then time to send in the men, who were tasked with coupling up with the ladies of the villa.

Anton Danyluk entered first and was chosen by Amy, who he decided to couple up with in return.

Next in was Sherif Lanre who wasn’t chosen by anyone and so was left to select someone himself – going for Amber.

She later traded him in, however, for aviation technician Callum Macleod.

There was another swap when Lucie chose to couple up with fireman Michael Griffiths only to swap him with Londoner Joe Garrett.

Yewande ended up, by default, with Michael, while Sherif ended up with Anna. 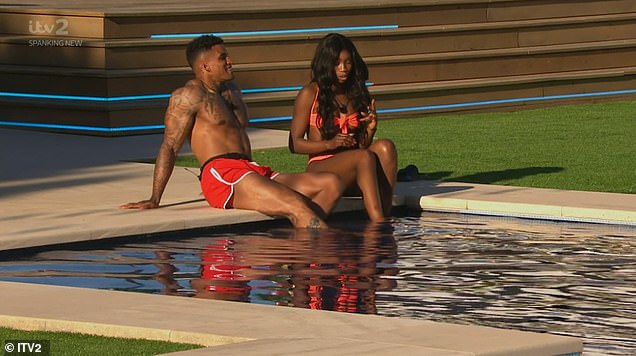 Meet and greet: Following the first round of coupling, the couples were sent off to get to know one another, with Lucie and Joe getting on like a house on fire, while Yewande realised she had a lot more in common with Michael than she presumed 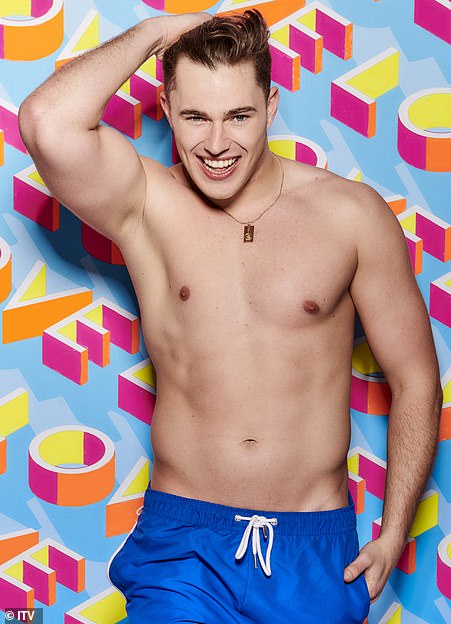 Claim To Fame: Curtis is a pro dancer on Dancing With The Stars in Ireland, and is the younger brother of Strictly Come Dancing’s AJ Pritchard

Thoughts On Dating: ‘I’ve probably been on less than ten dates, maybe five. I’ve never used a dating app. All of this meeting people on social media and apps is fake,’ he says

Ever Cheated? ‘I have cheated before. I will always be loyal from now on’ 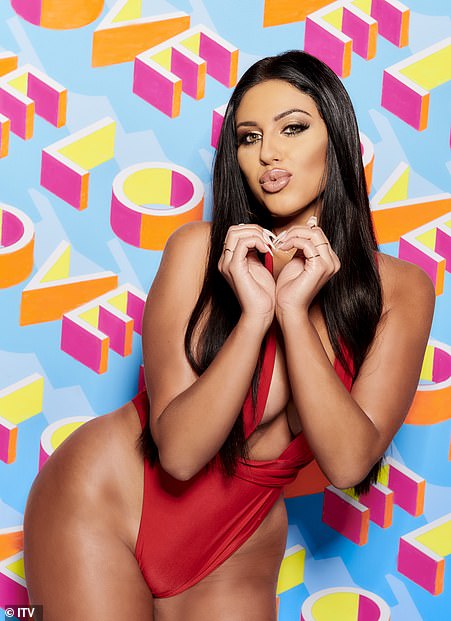 Claim To Fame: ‘I ended up on the Iranian News earlier this year when my sister and I were away in Qatar with two Iranian footballers who have a huge following. Suddenly my followers went up by 20,000 and I started being tagged in fan pages!’ she recalls

Marks Out Of 10? ‘I would rate myself an eight. My best feature is my eyes, I get compliments on my eyes a lot. I wish I had a penny for every time I’ve had a compliment on my eyes’ 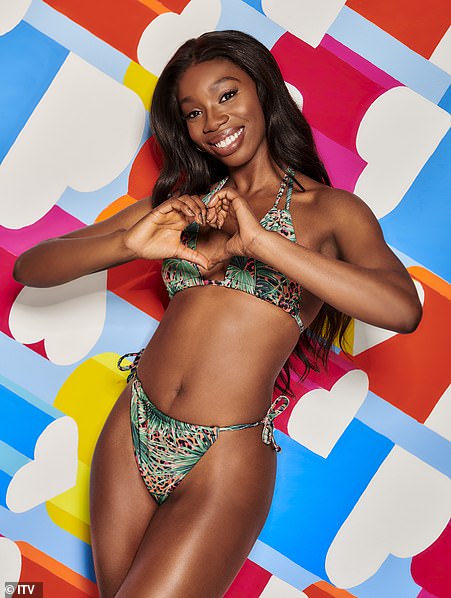 She blinded me with science: Yewande has been unlucky in love

Thoughts On Love: Yewande says: ‘I don’t think there is a science to finding love and if there is then I have clearly been reading the wrong books’

In It To Win It? ‘I am a terrible flirt but I’m such a girly girl and I can’t imagine stealing someone’s man in there. I don’t think I’d be that type but never say never,’ she says 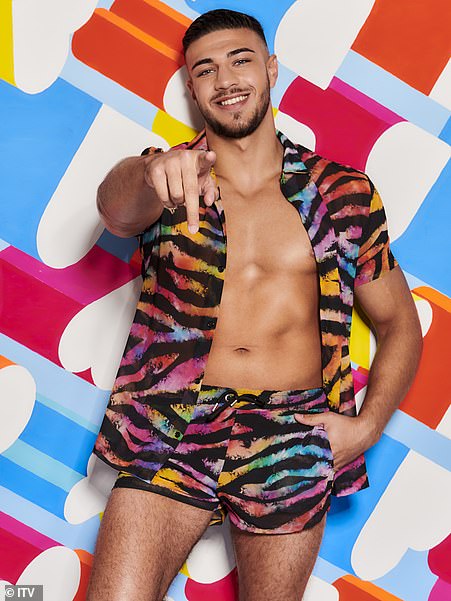 Too fast, too fury-ous: Tommy’s a boxer… like his brother 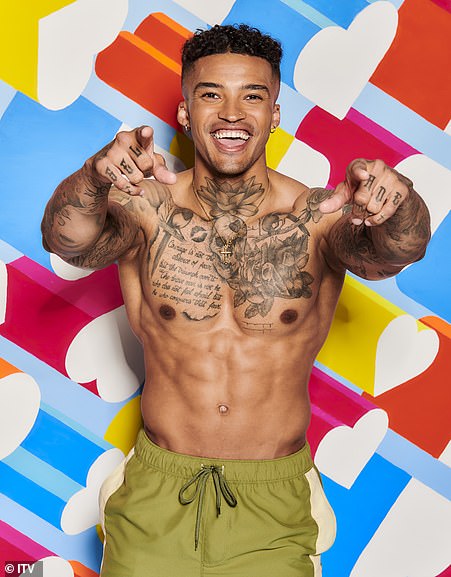 Marks Out Of Ten? ‘I get complimented on my smile a lot. People seem to be obsessed with my lips. I’d rate myself ten out of ten, I would have said nine but I’m a hero so it bumps it up,’ is Michael’s modest answer

Ever Cheated? ‘Once. It was a revenge cheat’ 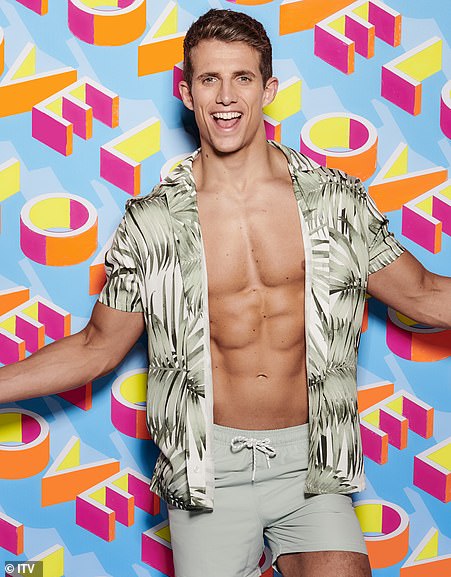 Up and away: Welsh Callum works in aviation

Disastrous Dating Story: ‘I went to the cinema with a girl and she sat on a piece of chocolate that melted onto her leather trousers,’ Callum recalls. ‘She shot off to the toilet to clean them and didn’t come back for ages. I watched the majority of the film on my own. I later found her fretting in the toilets because she couldn’t get her trousers back on’ 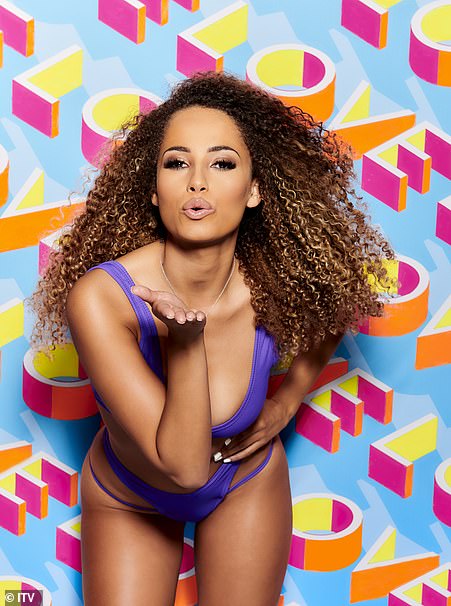 Disastrous Dating Story: ‘I was speaking to this guy and he lived in Manchester and I got the train down to see him,’ Amber recounts. ‘I was nervous because he was really good looking and a bit older than me. I had five Cosmopolitans in a can and I drank them on the train. When the train got to Manchester I got up and I was drunk! He was waiting for me at the train station and when I got off I fell through the gap between the train and platform. What an icebreaker though!’ 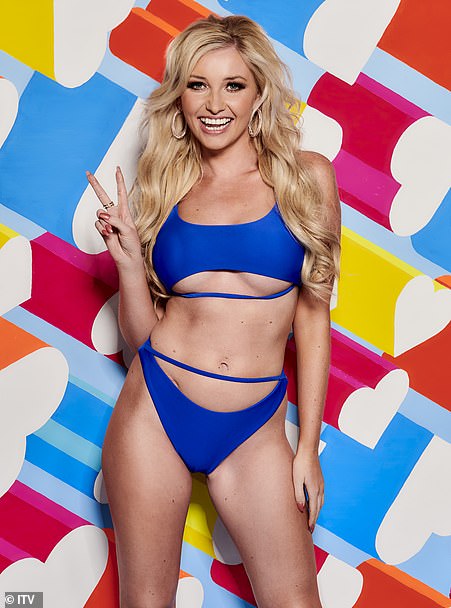 Got talent? Amy has a crush on David Walliams and Simon Cowell

Celebrity Crushes: Liam Hemsworth, Ashley Banjo, David Walliams and Simon Cowell. ‘You’d never go there obviously but there is something about them,’ Amy says

Claim To Fame: Amy once met Liam Payne and had a photo with him. When she posted it online she was bombarded with hate mail from One Directioners, who thought she was his new squeeze 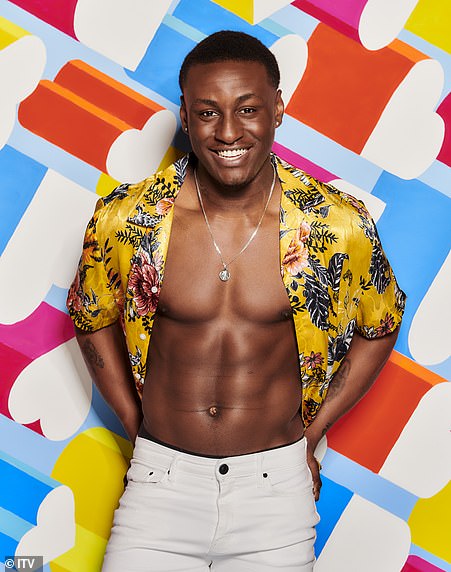 Food of love: Sherif is a dab-hand in the kitchen

Worst traits: ‘Number one would be that I’m pretty outrageous, that can also translate to the bad side,’ Sherif says. ‘On top of that, I laugh at everything which sometimes gets me into trouble. I can’t really take anything seriously. My actual laugh, my hysterical laugh is pretty ugly’ 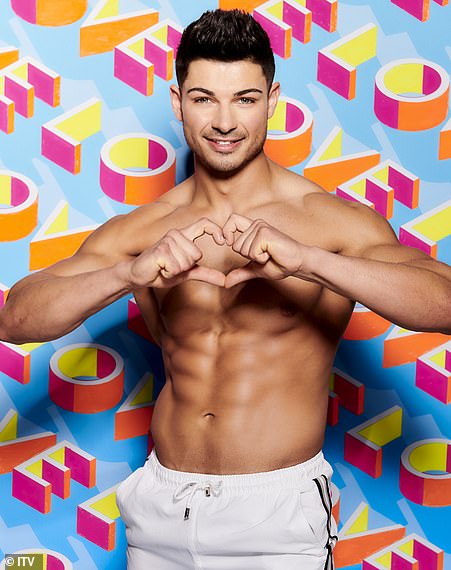 Fitness first: Anton wants a girl who likes working out

Worst Date: ‘I bought myself a Porsche when I was 21, as you do! I picked a girl up in that and she started taking pictures when she was in the car and sending it to her friends. It shouldn’t matter what I was driving whether that be a Corsa or a Porsche so I finished the date right there’ 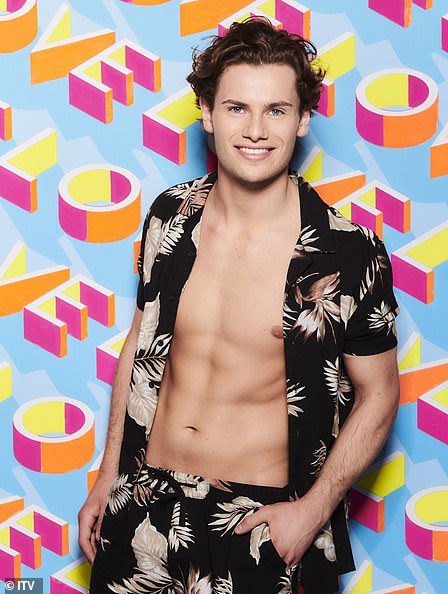 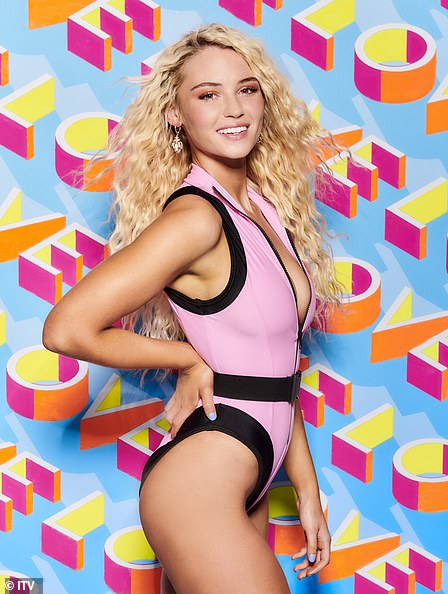 Marks Out Of 10? ‘Today, I reckon about an 8.5! In the mornings I’m probably like a low 8. I consistently stay around the 8s to 9s in my opinion. Maybe some days I go past the 9, when it’s a really good day…. a suit day. My best feature is my chat. I’m cheeky and a bit of a charmer. Looks wise, I’d say my best features are my teeth or curly hair’

Famous exes? ‘The last guy I was with was Charlie [Frederick] from last year’s Love Island. We got together a few weeks after he came out of the villa. I’ve spoken to Joey Essex on and off because I love his personality, it’s so funny.  Lookswise I like Jay Alvarrez. He surfs, skydives and he’s got amazing hair. I would marry him!’