‘My first instinct was to run a mile!’ Line Of Duty newcomer Kelly Macdonald says ex show star Keeley Hawes had to convince her to join

Line Of Duty newcomer Kelly Macdonald has revealed that Keeley Hawes had to convince her to join the gripping Jed Mercurio police drama.

The Scottish actress, 45, is set to play DCI Joanne Davidson in series six and had to be ‘talked’ into the role by Keeley, 45, who previously played Lindsay Denton in series two and three, as her first instinct was to ‘run a mile’.

Talking in a new interview with Radio Times, Kelly also admitted that she hadn’t watched Line Of Duty beforehand but had ‘seen bits’ on Gogglebox. 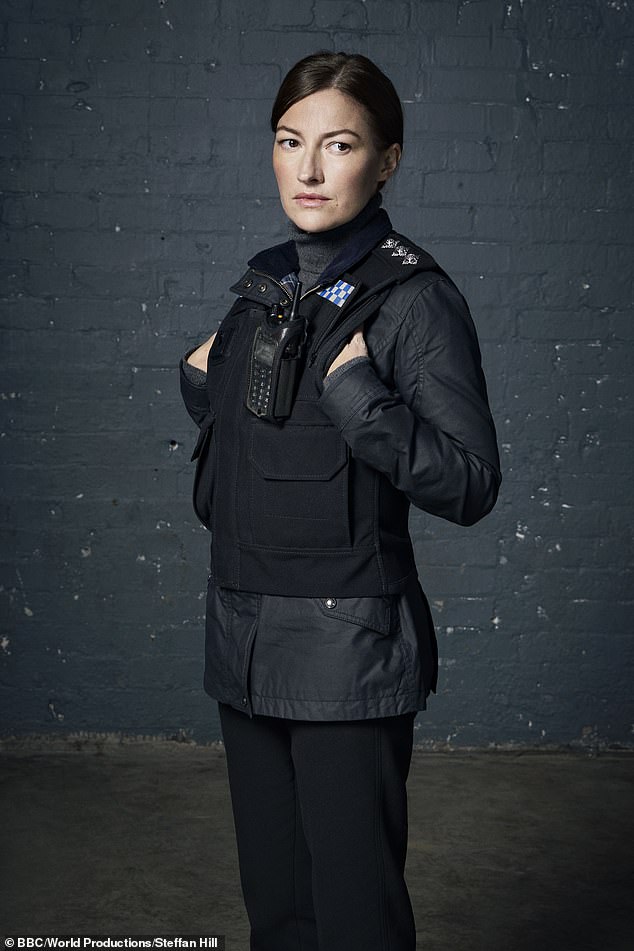 Pals: Line Of Duty newcomer Kelly Macdonald has revealed that Keeley Hawes had to convince her to join the gripping Jed Mercurio police drama (Kelly pictured as her character)

Speaking about her new role, the Trainspotting star admitted that she wanted to ‘run a mile’ after seeing how big her script was but luckily Keeley was on hand to ‘talk her down from the ledge’ and Steve Arnott star Martin Compston also encouraged her.

Kelly told the publication: ‘Talk about a big act to follow. It’s a horrible thing to ask of someone! But the real issue was the sheer number of words I had to learn. When I saw the script, my first instinct was to run a mile.

‘It’s all addresses and dates and police jargon, especially when I was interviewing suspects. Keeley was brilliant; she talked me down from the ledge.

‘She said it might look as though you are being asked to do something completely impossible, but it’s not.’ 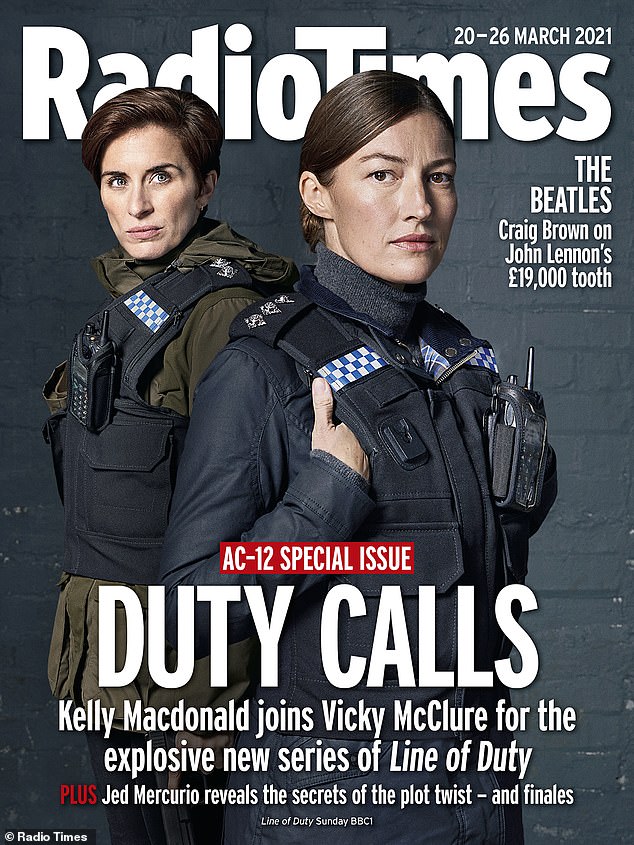 ‘Talked into’: The Scottish actress, 45, is set to play DCI Joanne Davidson in series six and had to be ‘talked’ into the role by Keeley, 45, who previously played Lindsay Denton in series two and three, as her first instinct was to ‘run a mile’ 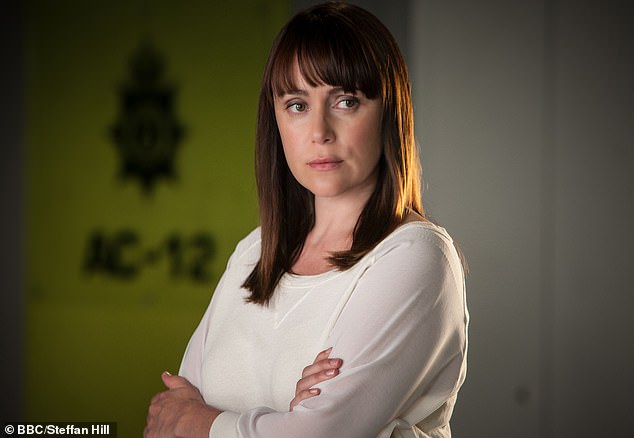 Kelly also revealed that DS Steve Arnott star Martin, 36, was also on hand to encourage her over the role.

Recalling an event in Scotland they both attended, she said: ‘He was so excited. He said, “Hey! You’ve got to do it!” It got to the point where I didn’t feel I could run away from it.

‘I thought it might actually be a good challenge and it really was. Although I still can’t believe I got through some of it.’

Kelly admitted that Line Of Duty creator Jed Mercurio was ‘delighted’ over her Scottish dialect as he thought it would mess with Martin’s, who was born in Greenock, Scotland, ‘head’ as the actor puts on an English accent for the show. 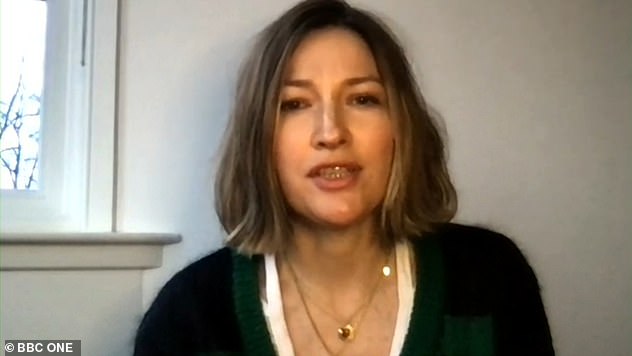 ‘I saw bits of it on Gogglebox!’ Talking in a new interview with Radio Times , Kelly also admitted that she hadn’t watched Line Of Duty beforehand but had ‘seen bits’ on Gogglebox

Elsewhere, the star admitted that she had never seen Line Of Duty beforehand and had to stop watching series four as it gave her ‘proper nerves’ over Thandie Newton’s incredible portrayal of DCI Roz Huntley.

She quipped: ‘I’ve not watched lots of things! I saw bits of it on Gogglebox and of course I was aware of its success.

‘I got halfway through season four and stopped because it was getting too close to the start of the shoot. I was getting proper nerves and watching Thandie Newton wasn’t making it easier!’

Kelly revealed that she did most of her scenes with Detective Inspector Kate Fleming, played by Vicky McClure, and that her friends have been bombarding her with questions over her character, even asking if she is the villain ‘H’. 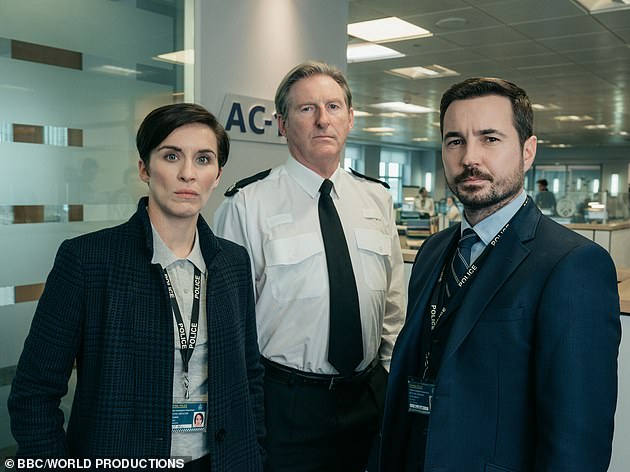 On hand: Speaking about her new role, the Trainspotting star admitted that she wanted to ‘run a mile’ after seeing how big her script was but Steve Arnott star Martin Compston, pictured far right, also encouraged her to take the role

Line Of Duty had just begun filming in Belfast when it was forced to postpone in March 2020 due to the coronavirus pandemic, it resumed production in September.

Kelly admitted that it was a ‘shock’ to go back to work and that she had got used to spending time at home with her sons Freddie, 13, and Theo, eight.

Line Of Duty is back on March 21 and in anticipation of the sixth series, the BBC released a full-length trailer last Tuesday. 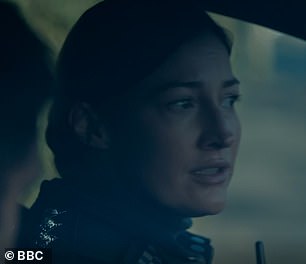 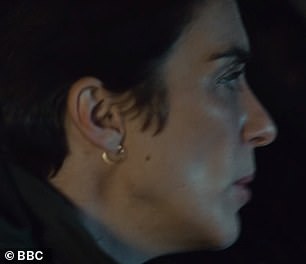 Exciting: Kelly, pictured left in show still, revealed that she did most of her scenes with Detective Inspector Kate Fleming, played by Vicky McClure,right

Creator Jed has been tight-lipped on details surrounding the upcoming sixth series, but has hinted that fans will learn more about H’s identity.

Fans were floored to learn in series five that after years of waiting to discover the identity of the villainous H, it was actually an organisation.

Jed left fans speculating he had revealed the identity of bent copper H when he dropped another major clue about series six in February 2020. 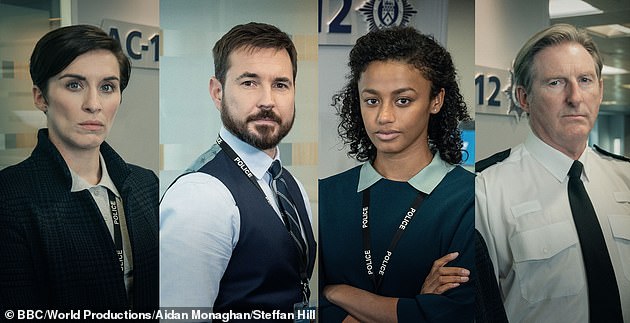 They’re back! Vicky, Martin and Adrian will reprise their roles, with Shalom Brune-Franklin also joining the cast as a new addition to AC-12 , a new trailer was released last week

He whipped up a social media storm with viewers of the smash-hit BBC show when he shared a photo of Australian chocolate biscuits TimTams with the caption #LineofDuty Series 6 Plot Clue No. 1.’

Manufactured by Arnott’s – the same surname as AC-12 guru DS Steve Arnott – the cryptic snap sent viewers into a frenzy, with theories ranging from a move to Australia to Steve breaking up with his girlfriend.

After filming for series six kicked off in February 2020, Jed shared a more on-the-nose snap from filming of a passed-out Ted Hastings lies slumped on a chair between stars Martin and Vicky.

You can read the full interview in the latest issue of Radio Times, available now.

Line of Duty will return on Sunday 21 March at 9pm on BBC One. 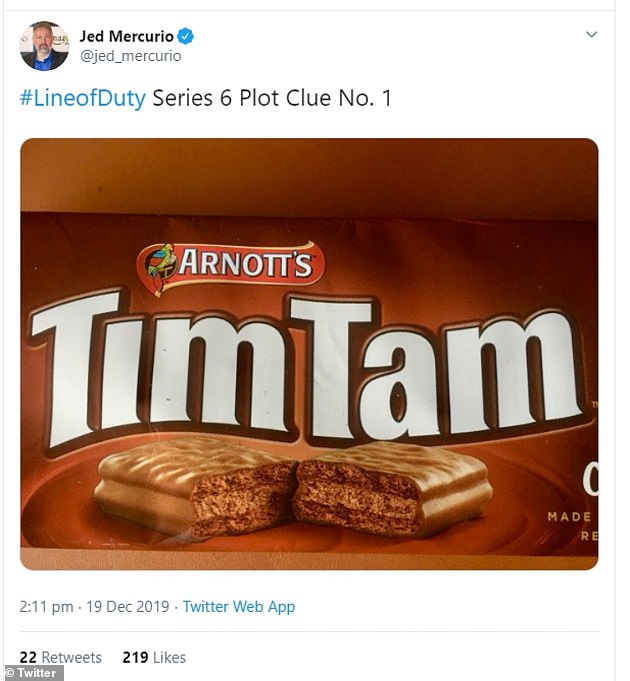 What’s going on? After creator Jed shared a cryptic snap of the Australia biscuit TimTams fans were rife with theories about whether it was a clue to H’s identity 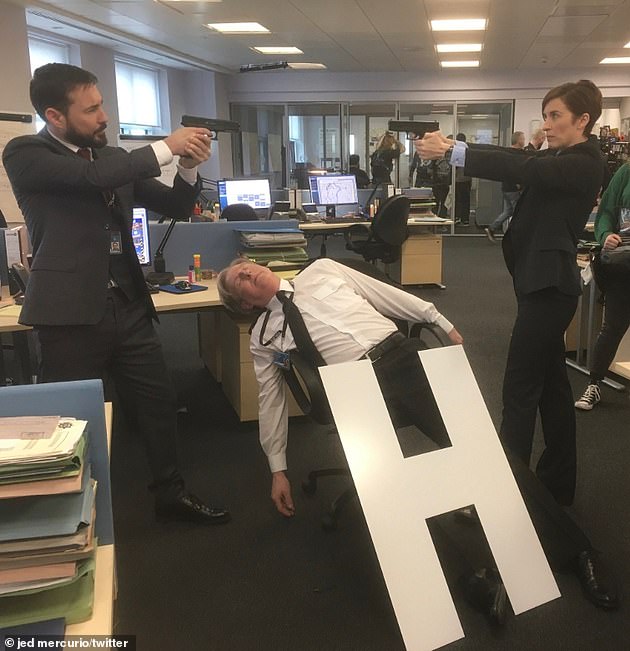 ‘This is spoiler free’: When filming for series six began, Jed shared another snap from filming of a passed-out Ted Hastings lies slumped on a chair between stars Martin and Vicky

Line Of Duty creator Jed Mercurio excited fans when he shared the first clue about the plot of season six to Twitter.

Uploading a snap of a packet of the Australian chocolate biscuits TimTams with the caption ‘#LineofDuty Series 6 Plot Clue No. 1’, fans began to ferociously speculate as to what it might mean.

But one plot point hanging over the next season of the show is about the identity of the ominous ‘H’.

While the mystery was somewhat answered in the season five finale, it was also revealed that there are FOUR people pertaining to be ‘H’, with the final one still unknown.

So who could it be?

She was one of season five’s stand-out characters, swooping in towards the end of the series to interrogate Ted Hastings – highly suspected to be ‘H’ at the time.

And while she simply seemed to be excellent at her job – and hellbent on uncovering the corruption within the department – could it be that Patricia Carmichael was SO keen to pin the blame on Ted to take the focus away from herself.

Could SHE be the fourth ‘H’?

Her position of power and respect, along with her unnaturally steely and cut-throat demeanor, could well point to this.

Ted Hastings was pinpointed by viewers of the show, as well as the characters on the show, to be a candidate for ‘H’.

But it seemed he was exonerated by the end of season five, allowed to walk free.

But could be potentially be triple-crossing us all? Could he in fact STILL be the potential fourth ‘H’.

The biggest issue with this theory is that Gill Biggeloe – one of the three revealed to be ‘H’ – was so against him. Surely she wouldn’t be working to deter him if they were in league?

UNLESS, she doesn’t KNOW he is the fourth ‘H’?

Detective Chief Constable Andrea Wise was new to the show in season five and is another high-powered contender for ‘H’.

She has been constantly interfering when it has come to supporting AC-12’s investigations, removing them from the investigation into Operation Pear Tree. She also instigated the Ted Hastings investigation.

She is also keen to cover up police corruption, despite announcing at the end of season five: ‘This constabulary will work tirelessly to root out rotten apples in its ranks.’

Police and Crime Commissioner Rohan Sindwhani demanded to be ‘in on’ a meeting between Andrea Wise and Ted Hastings. This might be a small clue but any clue could be valid at this point.

Any shady behavior suggests ‘H’ is at play, and so Rohan could indeed be culpable.