Kourtney Kardashian, 42, had some very special women in her life at her Poolside with Poosh party last month, including some of her sisters and her closest friends. Alabama Barker, 15, and Atiana Cecilia De La Hoya, 22, the daughter and stepdaughter, respectively, of Kourt’s beau, Travis Barker, were also in attendance. The step-siblings appeared to be bonding with Kourtney when the trio was captured together in a cute photo — which can be seen below — during the event.

In the snap, which Kourt shared to Instagram on Oct. 1. among a series of photos from the event, the reality star lounged on a couch outside while sitting beside Alabama and Atiana. All three girls were dressed in matching Poosh robes, and looked to be so relaxed. And frankly, who could blame them?

Kourtney captioned her post, “poolside with @poosh.” Both Alabama and Atiana, who have grown close with Kourtney since she started dating their rockstar dad, commented back to the mom of three. Alabama dropped two heart emojis and raising-hands emojis under Kourt’s post, while Atiana used a few shooting star emojis to express her joy at attending the fabulous event. 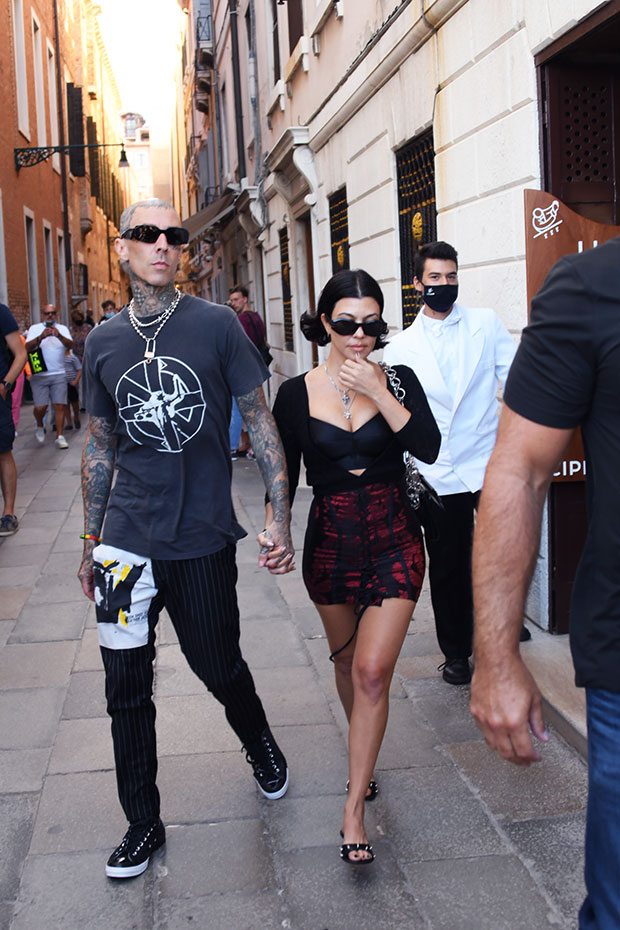 Kourtney and Travis started dating earlier this year, and throughout their PDA-filled relationship, they’ve brought their blended family together. In May, the loved up couple brought along Kourtney’s three kids, Mason Disick, 11, Penelope Disick, 9, and Reign Disick, 6, and Travis’ daughter Alabama and son Landon Barker, 17, to Disneyland. (Travis is also stepdad to Atiana, who is the daughter of his ex, Shanna Moakler). The group had a blast together at the iconic park as they hit up Splash Mountain, spun in the Tea Cups, zoomed on the Big Thunder Mountain Railroad, and more.

The couple’s children are obviously very important to them, and their life as parents certainly plays a factor in the future of their relationship. “This Christmas and New Year is going to be a big deal for them and the entire family,” a source previously told HollywoodLife. “Travis wants to gain the trust of Kourt’s kids and vice versa because he’d like to be engaged and married to her sooner than later.” That same source also told HL that Travis and Kourtney “aren’t actively trying” to have children together, “but if she [Kourtney] gets pregnant this year, they’d both be very happy about it.”

Inside Larry King’s Life Before He Passed Away